As far as one diehard Liverpool fan's tattoo is concerned, the Reds have already pulled off the double - winning the league and a seventh European cup.

Although a Premier League title is now thought to be virtually in the bag, a consecutive Champions League victory is far less certain: the Reds are currently chasing a 1-0 deficit from their first leg match against Atletico Madrid, who they face at Anfield next month.

Dad-of-two Paul Glover got the tattoo done after he lost a "challenge" set by his mate Mathew Groves.

The friends, who live in Taunton, Somerset, have both been Reds fans since childhood and now have their own YouTube channel in which they dare each other to challenges as part of a charity fundraising drive.

Paul said: "The Premiership tattoo was a challenge I couldn't say no to. 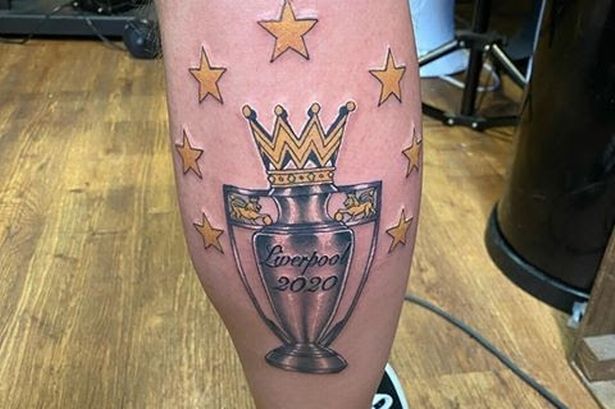 "As for the seven stars, I wasn't expecting that as part of the tattoo but I know now anything is possible. Istanbul this year would be special.

"If not, I know number seven will come soon so the tattoo will stay. I am proud of the team and proud to have the tattoo."

He added: "I've supported Liverpool all my life, for as long as I can remember.

"I remember the last time we won the title in 89/90 although I was too young to celebrate it properly. Little did I know then that it would take Liverpool so long to ever win another top flight title but I was addicted.

"Many fans from other teams in childhood days often switch teams but not when you are inducted in to Liverpool at such an early age. It stays with you forever, it’s different.

"I have been to many games now and travel up to Anfield whenever I can. My two girls , aged five and two, are both Liverpool fans already."

Mathew, 38, said: "To date we have done some fairly silly challenges - the forfeits for this one were if I lose I had to eat the Doomsday chilli extract, and if Paul lost he would get a Liverpool win the Premiership in this year tattoo.

"Paul had no say in his tattoo and and it seemed almost a foregone conclusion that Liverpool would win the title.

"I felt I had to up the ante - and include Liverpool to win the next Champions League title giving them seven stars and a lovely tattoo for Paul.

"I am sure myself and Paul will attend more matches soon and will be coming to the Premiership title parade where we plan to make a video of the celebrations ourselves."

The full video of Paul getting his tattoo done can be viewed here.