Climbing from a raging fireball and the twisted wreckage of his car, Romain Grosjean, and indeed Formula One, enjoyed what might be considered a miraculous escape at the Bahrain Grand Prix. The entire paddock and viewers around the world held their breath when the French driver smashed into trackside barriers, his car splitting in two and being engulfed in flames. The visceral, violent and horrifying scale of the accident was sickening and yet Grosjean emerged relatively unscathed, a remarkable testament to the drive for safety the sport has relentlessly pursued.

Such is F1’s recent safety record the perception of motorsport’s extraordinary danger has perhaps been diminished. With Grosjean hurtling through the brutal moments of distorting metal and fiery heat, the notion was dispelled completely.

Lewis Hamilton, who went on to win, had made a clean start from pole but on the opening lap behind him, Grosjean, who drives for Haas, had suffered the huge accident going straight into the barrier at turn three. His car was engulfed in a fireball, which burned fiercely and was still on fire when he climbed from the wreckage. Grosjean had been in the flames for 18 seconds.

The French driver exited his cockpit, leaping over the crumpled barriers after the most serious accident the sport has seen since Jules Bianchi’s crash at Suzuka in 2014, the injuries from which he later died. Grosjean was lucky to be alive after what had been an extremely unusual incident, given how rare it is for modern cars to catch fire.

He had come across the track and clipped Daniil Kvyat, causing him to veer at high speed over a very short run-off area. His car speared into the steel barrier and completely sheared in half, allowing fuel to escape. Grosjean was in the front half of the car, which punched through the barrier, a severe impact in which his life was almost certainly saved by the halo cockpit protection device. Remarkably the 34-year-old had only sustained burns to his hands and ankles. He was taken by helicopter to hospital with suspected broken ribs. 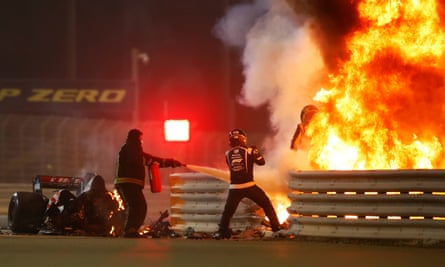 Romain Grosjean emerges from the flames after a horrific crash on the opening lap of the Bahrain Grand Prix. Photograph: Andy Hone/LAT Images

F1’s protocols for race safety had proved invaluable. Dr Ian Roberts and the driver Alan van der Merwe, who are in the medical car which follows behind the grid after the start, were vital in helping Grosjean. They were swiftly on the scene, helping him to escape and extinguishing the fire alongside the marshals, who also reacted swiftly.

The Haas team principal, Guenther Steiner, swiftly went to find and thank Roberts and Van der Merwe. “If you see the barrier it is unbelievable, we were lucky,” he said. “We got away with it, I think. I would like to thank all the marshals. They did a fantastic job to get him away as quick as possible from the fire. It was amazing what they did.”

Van der Merwe, a South African former racer who has been driving the medical car since 2009, emphasised how F1’s pursuit of safety measures had proved themselves. “I have never seen that much fire and an impact like that in 12 years,” he said. “It just goes to show all the systems we have developed – everything worked hand in hand. The halo, the barriers, the seatbelts, everything worked as it should. Without one of those things it could have been a very different outcome.”

The role the halo protection device played was crucial. It had been resisted by some on aesthetic grounds when it was introduced in 2018 but this crash has proved beyond any doubt its worth. Grosjean’s head would have been completely exposed to a frontal impact with the barriers through which his car passed but the halo acted to force the steel up and away from his head, making a gap through which he passed.

We are so thankful that Romain Grosjean was able to walk away from this. We did not need a reminder of the bravery and brilliance of our drivers, marshals, and medical teams, nor of the advances in safety in our sport, but we truly got one today#BahrainGP 🇧🇭 #F1 pic.twitter.com/z8OeTU5Nem

With the race stopped, there was clear shock and concern across the paddock as the drivers and teams saw the incident replayed. Their relief at Grosjean’s escape was palpable.

F1 has seen few incidents of similar violence in recent years. In 1981 John Watson’s McLaren spun backwards in to the wall at Monza, splitting his car in two. He, too, was protected by a new safety development – the carbon-fibre monocoque from which today’s cockpit survival cell has developed. In 1990 Martin Donnelly’s Lotus hit the barriers at Jerez at 140mph, tearing his chassis in half and throwing the driver from the wreckage, an incident he, too, was lucky to survive. It was Bianchi’s crash at Suzuka that had prompted the FIA to investigate adopting a cockpit protection device.

Hamilton emphasised the sense of relief across the paddock. “I’m so grateful Romain is safe,” he wrote on social media. “The risk we take is no joke, for those of you out there that forget that we put our life on the line for this sport and for what we love to do. Thankful to the FIA for the massive strides we’ve taken for Romain to walk away from that safely.”

With the twisted wreckage of the Armco barriers replaced by concrete blocks racing resumed an hour and half later. There was no holding back by the drivers despite the horrific nature of the accident they had witnessed but the race, as it has so many times this season, belonged to Hamilton. In control throughout, he led to the flag with ease to deliver another dominant win, ahead of Red Bull’s Max Verstappen and his teammate Alex Albon.

Koeman before Rayo: The Cup is the shortest path to the trophy, but it did not get easier because of the relegation of Real Madrid and Atletico
Messi and his family take French lessons. Why teach him to go to the City? Canal+ journalist about the forward at PSG
Johnson on Lampard's resignation: In the world of results, it doesn't matter who you are - Mr. Chelsea or not
Alexander Golovin: Kovac is a competent specialist. Excellent work with him
Arsenal want to play the Europa League away match with Benfica on a neutral field due to a possible ban on flying to Portugal
Coach Istanbul Webo on the scandal: Tuchel did not show solidarity. I am furious, I was discriminated against
Barcelona did not pay the players for six months in December, although they took out a loan. The club promises payments in February
Source https://www.theguardian.com/sport/2020/nov/29/formula-one-bahrain-gp-jean-grosjean-lewis-hamilton