Lewis Hamilton's priority in 2021 is to increase diversity in F1

Lewis Hamilton has said his priority this year is making a significant difference to improving diversity in Formula One, rather than chasing a record-breaking eighth championship, and echoed the Crystal Palace forward that it is more important to have “uncomfortable conversations” rather than gestures such as taking the knee.

Hamilton led the way in F1 last year to focusing attention on fighting racism. He was angry and strident after the killing of George Floyd and instigated the anti-racism gesture F1 adopted on the grid before races. All drivers participated and the majority took the knee throughout the season but Hamilton is now in broad agreement with Zaha’s recent statements that gestures are no longer sufficient.

“I don’t think it’s the most important thing that everyone takes the knee, it’s more the action we take in the background,” said the 36-year-old. “What’s really important is things pass and die down. It’s important it continues to be an issue that affects my day to day life and so many people.

“It’s really important to continue having that conversation, continuing to hold uncomfortable conversations with people. Because change is possible and change is needed. We will see how we can collectively work together so we are leading more in this sport and it is not necessarily having to be taking the knee.”

Hamilton was speaking at the launch of Mercedes’ new W12 car. He and the team dominated the 2020 season, with the Mercedes taking 13 wins from 17 meetings. Hamilton goes into the new season as strong favourite to take an eighth title, one more than the record held by Michael Schumacher. The reigning champion, now in his 15th F1 season, said he was as committed and motivated as strongly as ever but that winning a fifth consecutive title does not take precedence. 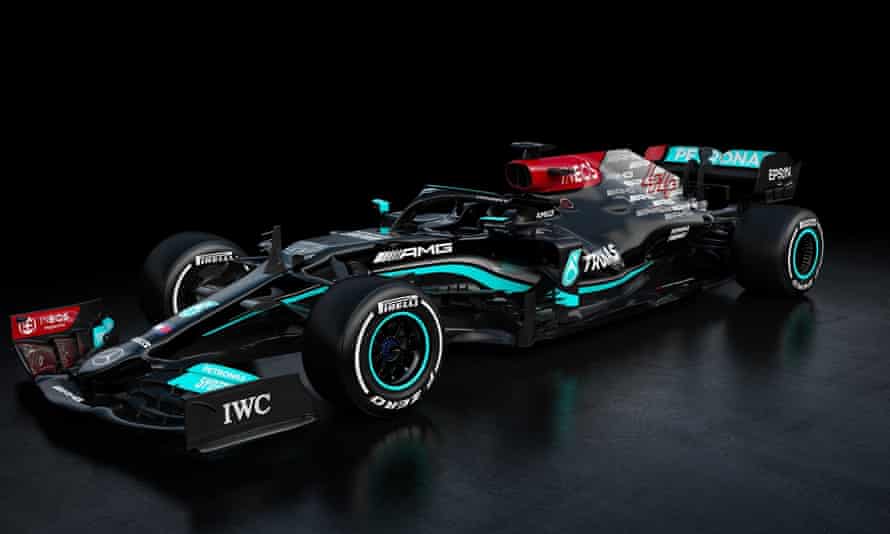 “Last year there was a lot of discussion around diversity and it remains an issue and it is not going to change overnight. What is really important is to make sure we are delivering and actually taking action,” he said. “We are starting to see progress and it takes one step at a time. That’s my driving force this year too, to make sure we continue to push for accountability. On top of that hopefully I can deliver some good performances.”

Hamilton last year created a commission in partnership with the Royal Academy of Engineering to investigate engaging young black people in the Stem subjects – science, technology, engineering and mathematics – and encourage them into motor racing and engineering. Mercedes are running their cars in the black livery they adopted last season to highlight their commitment to anti-racism. When Hamilton signed a one-year contract with Mercedes, part of the deal was the establishment of a joint foundation between team and driver to create greater diversity and inclusion in motorsport. These are all avenues he intends to pursue vigorously this season.

His future in F1 remains uncertain and he has yet to decide whether to continue into 2022 when a major regulation change will shake up the sport. Having equalled Schumacher’s title tally and surpassed the German in victories, he is already the most successful driver of all time. However, he was emphatic that how long he continues in racing will be dictated by if he is still enjoying competing.

“I have made a really important decision that I don’t want that [title] to be the deciding factor,” Hamilton said. “I got into racing because I love racing, that’s got to be at the core of what I do. If all you’re going for is accolades, for titles, I feel like I could potentially lose my way.

“Of course it’s the ultimate dream but I don’t think that necessarily is going to be the deciding factor on whether I keep going. It’s more when I put that helmet on I still have that smile when I leave the garage. It’s going back to: ‘Do you enjoy it?’.”

Raphael Leau: Milan is a great club and deserves to return to the Champions League
Shupo-Moting has scored 4 goals in his last 5 Champions League games. He has one goal in 18 Bundesliga games
Juventus wants to extend the loan of Morata for at least another season for 10 million euros
Milan wants to buy Tonali from Brescia
Dembele has an inguinal hernia. He has been playing with discomfort for several weeks and is being treated conservatively
Alaba repeated Ribery's record for matches for Bayern for players not from Germany - 425
Mauricio Pochettino: It's impossible not to love Mbappe. It is easier to train him than anyone else

Royal Family urged NOT to apologise to Meghan Markle: 'Who does she think she is?'