Jacinda Ardern has delivered a rousing speech to the Labour party faithful at its annual conference ahead of September’s election.

Polls have Ardern’s government on track to be comfortably returned on 19 September, possibly as Labour’s first majority government since a new electoral system in 1996 came into force.

The 39-year-old’s personal popularity has soared after her government’s response to Covid-19, which has saw the country pursue a policy of elimination.

As Labour put Ardern front and centre, the prime minister herself hoped Kiwis woudl reward her government for its response to multiple tragedies during its three-year term.

“I can’t think of a time in our recent history when we have been collectively challenged by such a cruel combination of events,” Ardern said.

“A terrorist attack. A volcanic eruption. A global pandemic and now its ensuing financial crisis.

“Our national character has been repeatedly put to the test and yet we have come back with an almost stronger sense of ourselves and of what matters most to us.” 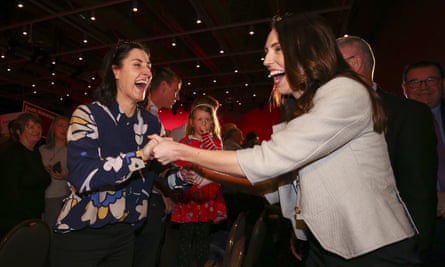 Jacinda Ardern greets a supporter after her speech congratulating the nation on its response to multiple tragedies. Photograph: Hagen Hopkins/Getty Images

Three new cases of Covid-19 were reported in New Zealand on Sunday, all involving people who have returned from abroad and who are staying in quarantine facilities. In total, 1,183 cases have been detected in the country, including 21 active cases.

The country moved to alert level one on 8 June, having eliminated community transmission of the virus. However returning travellers have since tested positive to Covid-19.

Acknowledging the complex challenge of the pandemic, Ardern said there “wasn’t a playbook for Covid”.

“There wasn’t a playbook for the recovery. And speaking frankly, there hasn’t been one for much of what has happened this term,” she said.

There are just nine scheduled parliamentary sitting days until the poll, with advance voting starting in two months.

Labour, and its coalition partners New Zealand First and the Greens, will also spend up big.

Ardern has pledged to avoid austerity during the onset of recession, and the government’s budget has a $NZ20bn ($US13bn) Covid-19 response fund to dish out.

On Sunday, she made just two new announcements.

A $NZ162m for projects designed to return dirty waterways to health, and the extension of a small business loan scheme which has already paid out $NZ1.5 bn.

Ronaldo, Messi, van Dijk, Sancho and Lewandowski - in the team of the season according to WhoScored
Maurizio Sarri: Juve are happy to have won perhaps the most difficult championship in the history of Serie A
Aubameyang is close to extending his contract with Arsenal until 2023
Rodri: Hazard is one of the best players in the world
We hit the Manchester United check for Alexis Sanchez: one goal – 11 million euros, a minute of playing time-20 thousand
Pep Guardiola: if Manchester City want to win the Champions League, they need to improve their defensive performance
The Premier League clubs voted against 5 substitutions next season
Source https://www.theguardian.com/world/2020/jul/05/lets-keep-moving-jacinda-ardern

Denial of responsibility! The World News is an automatic aggregator of the all world's media. In each material the author and a hyperlink to the primary source are specified. All trademarks belong to their rightful owners, all materials to their authors. If you are the owner of the content and do not want us to publish your materials, please contact us by email ab[email protected]. The content will be deleted within 24 hours.

Free to a good home: More than a dozen mannequins available in Darlington

Increase in foster carers in Redcar and Cleveland despite decline nationally