Patrick Vieira was seconds away from stunning Arsenal on his return to the Emirates, only to be denied in the cruellest fashion. His Crystal Palace side had overturned Pierre-Emerick Aubameyang’s eighth-minute opener, dominating the game thereafter and scoring fine goals through Christian Benteke and Odsonne Édouard in the second half. Then, with the game’s final action, Alexandre Lacazette poached an equaliser that will break the visitors’ hearts and leave Arsenal thanking their lucky stars. In the touchline meeting between two ex-Arsenal linchpins, Vieira had comfortably bested Mikel Arteta and should have departed with all three points.

Vieira was serenaded as the teams prepared for kick-off, responding with a wave to both sets of fans. Earlier, his name had been cheered loudly upon being read out over the public address system. Arsenal’s decorated ex-captain never represented them inside this arena, which has sorely missed winners of his stature. In his ninth game managing Palace, he was tasked with demonstrating that the hosts would have to wait even longer before feeling they might hold a candle to his generation.

That quest quickly became an uphill one. Arsenal had started at a rate of knots in their previous home game, the demolition of Tottenham, and Palace must have expected an early onslaught here. It duly came and Aubameyang’s opener owed plentya to Arteta’s removal of the shackles against opponents he would back Arsenal to overpower.

Nicolas Pépé returned in place of Albert Sambi Lokonga, meaning Arsenal began with four attack-minded players in front of Thomas Partey. Arteta had not felt equipped to be so bold before this season; he was rewarded when Pépé kept the ball in play near the right touchline, exchanged passes with Takehiro Tomiyasu and aimed a curler towards the far post. Stop Pépé from doing exactly that on his left foot, and he is blunted; Palace’s defence did not get the memo, though, and Vicente Guaita dived to tip the shot away. He did not get enough purchase to flick it to safety and a careering Aubameyang jabbed the loose ball into an empty net from a modestly challenging angle.

Palace had thrived here in recent times under Roy Hodgson, taking five points from their last three visits. Those had largely come about by mixing intense hustle with the verve of Wilfried Zaha; the Ivorian was sidelined through illness this time, though, while Vieira’s desire to be expansive boded ill for any expectation that they could scrap this one out. But his players belatedly settled and, by half-time, they had avoided the evisceration handed to Spurs and could feel they were in the game.

Benteke’s presence kept Arsenal honest and he forlornly requested a penalty after being snuffed out by a combination of Partey and Gabriel Magalhães. In the 23rd minute he forced a smothering stop from Aaron Ramsdale after being allowed to turn. Ten minutes before the interval, Édouard lifted Palace’s best opening over the bar after weak defending had allowed Jeffrey Schlupp to cut back; they came closer with the half’s last action, though, when Ramsdale brilliantly repelled Conor Gallagher’s dipping volley. 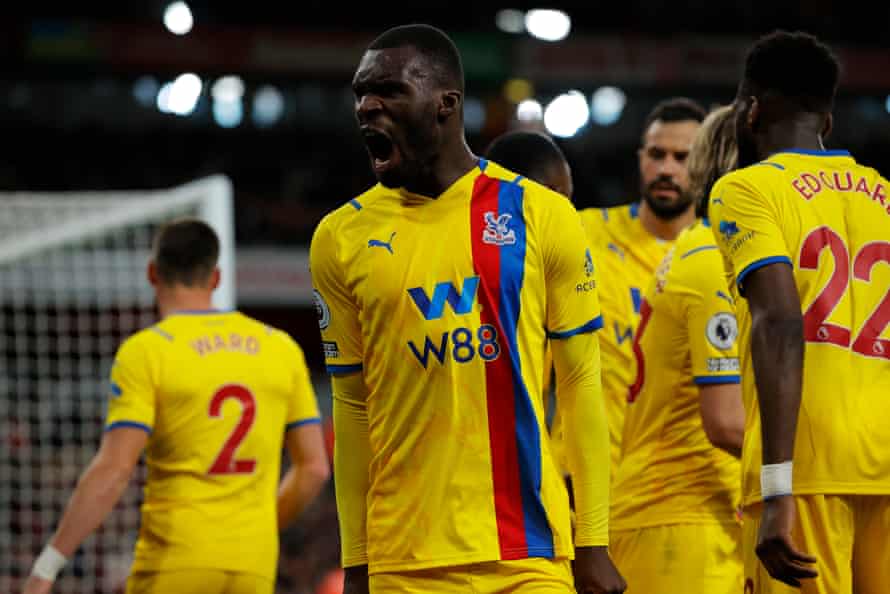 Arsenal could not be faulted for endeavour but they had become passive, increasingly living off counterattacking scraps. Beyond an Emile Smith Rowe daisycutter that Guaita held, they never looked remotely like adding to their lead before the break. A hefty whack on the leg to Bukayo Saka from James McArthur, who was booked, required treatment and meant Arteta headed down the tunnel furrowing his brow.

Saka did not reappear for the second half. That presumably owed to his injury, although the introduction of Lokonga made added sense given Palace had wrested control of midfield from around the 20-minute mark. Partey came close with an audacious 30-yard effort within moments of the restart but almost immediately gifted Palace the equaliser they deserved.

He was caught on the ball by Jordan Ayew, who was simply sharper, 15 yards outside the Arsenal area and Benteke quickly seized possession. Driving past Gabriel and directly facing Ramsdale, he finished crisply and wheeled away to celebrate his first goal since breaching the same opponents at Selhurst Park in May.

Ramsdale tipped over Ayew’s drive from the edge of the box and, shortly afterwards, exhorted his ponderous teammates to push up; as the latter stages beckoned, they still looked incapable of fashioning another clear chance.

Lacazette replaced the anonymous Martin Ødegaard and initially seemed to tilt the scales, drawing a good save from Guaita. Remarkably, Arsenal were exposed after the resulting corner. This time Lokonga was the man dispossessed, seeing Gallagher dart in and allow the recently-deployed Michael Olise to counter. Gallagher ran on in support and, after receiving the ball back, quickly slipped it to his right. Édouard gratefully took receipt, carrying it forwards before lifting a superb effort over Ramsdale as Ben White backed off.

Kieran Tierney hit the bar but Palace appeared to have earned the win. Then Lacazette pounced at the last after Guaita had saved White’s deflected shot. Palace’s players slumped to their knees.

Woman caught partner cheating after he forget their phones were paired

MLB owners lock out players in first work stoppage since 1995

The moment 19-year-old drives on pavement to escape police... before being found with drugs and guns

‘A nation’s fabric unravelling’: stars on Sly Stone’s There’s a Riot Goin’ On at 50

Can the tourism industry survive the climate crisis?

Pep Guardiola breaks record for quickest boss to 150 Premier League wins – but how far ahead of Sir Alex Ferguson is he?

Thousands still without power as snow falls in parts of UK

Gangs of up to 45 youths cause misery at retail park

Do we live in a simulation? One little known theory proves Elon Musk wrong

Voices: Vaccine inequality is a major problem – we need to fix it

Brother of missing teen, 16, charged in connection with her death after body found

The duo on a mission to revive Swansea's live music scene

The £1billion masterplan for 2,700 new homes over next 15 years for Pomona Island