“Totally unfair” Diego Simeone called it, but it’s over now.

When the Football Association handed Kieran Trippier a 10-week ban for breaking its betting regulations, Atlético Madrid’s manager asked why it should be his club that paid and how the institution passing judgment could be the same one “benefiting” from it, claims of injustice crystallising around the timing: the England defender would miss 12 Atlético games, including their first Champions League meeting with English opponents Chelsea, and conveniently return just in time for the next international break.

In fact, Trippier returns just in time for something bigger. Available again having not played since January, on Sunday afternoon he will go straight back into the Atlético side for the Madrid derby. Not just any Madrid derby, either. There will be no fans, a tiny handful of the 68,456 seats at the Wanda Metropolitano occupied and the rest lying empty, none of the atmosphere that makes this game so special. But it is a derby that may go a long way towards to deciding the league title.

Atlético are five points clear of their neighbours and Barcelona with a game in hand over both, which they play against Athletic Bilbao next Wednesday. Win and they would take a big step towards the title, the mini-crisis in which they dropped as many points in 12 days as they had in the entire season until then put behind them. Lose and those doubts will deepen and the pursuit quicken, their nerves ever more frayed. Within four days, Atlético could be 11 points clear with 12 games to go, or barely ahead at all.

Real, meanwhile, could find themselves perfectly positioned for an assault on a league title that many had already been given up as lost. Or they could find their domestic season close to over. Everybody has been swift to insist there is a race to be had regardless of what happens here, Zinedine Zidane his usual picture of calm, but they know this is big. Which is perhaps why Atlético’s chief executive complained about match officials being “conditioned” by the referees’ chief saying Thomas Lemar should have been sent off last Sunday and why, for two days running, Real Madrid TV produced preemptive hit pieces on the referee, Alejandro Hernández Hernández.

It may also urge caution, the desire to win weaker that the need not to lose.

The officials will, as ever, be the inevitable, tedious focus, but there are others, men more worthy of attention. Luis Suárez and Karim Benzema especially. This game has two of the world’s best goalkeepers, Jan Oblak and Thibaut Courtois. There may be no better midfield anywhere than Casemiro, Toni Kroos and Luka Modric, and no better player in La Liga this season than Marcos Llorente, the Atlético midfielder who began at Real, where his father, grandfather, uncle and great uncle all played. There may be no better redemptive story than Suárez, although he has gone five games without a goal.

Yet Trippier’s return is genuinely significant. There is a reason he played every single league and Champions League minute until the ban. A reason why he immediately returned to the team when Fifa momentarily put that ban on hold: having missed two matches, he came back, played 90 minutes against Sevilla, provided an assist and then disappeared again when the ban was upheld. A reason he will go straight back into the starting XI on Sunday, even though the opponents are not the kind of side against whom you risk a man who hasn’t played for two months. 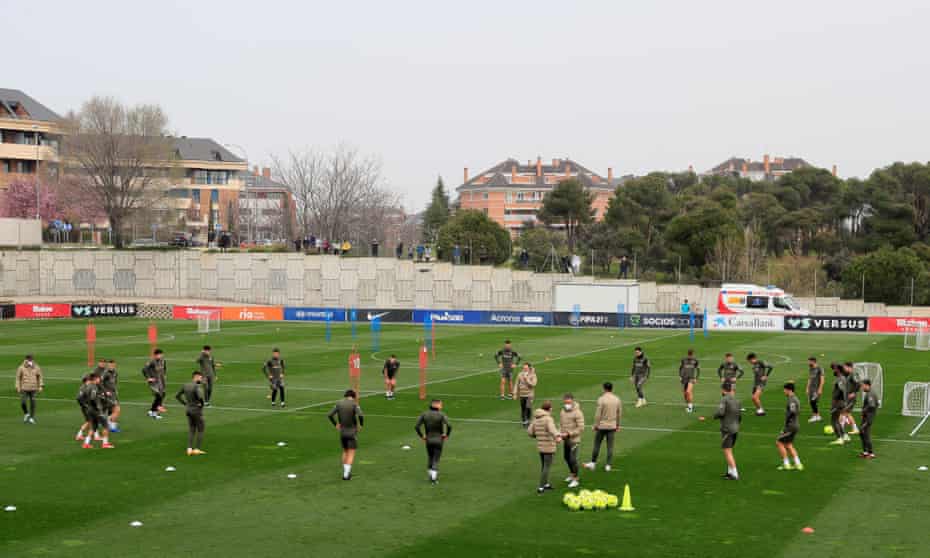 At their Cerro del Espino training ground this week Atlético prepared with him at right-back in a four. It is still possible Simeone opts for a five but either way Trippier will be in it – and he is in extremely good shape too. Originally banned from training with his teammates or even alone at Cerro del Espino, isolated and following an individual programme at home, when Fifa applied what Simeone called “a parenthesis”, he rejoined the group. Although the ban was upheld, Atlético understood that they had Fifa’s authorisation for him to train, against the FA’s judgement.

In total, with Trippier in the team Atlético won 11, drew two and lost one. They conceded only five times in 10 games. Without him, they won seven, drew two, and lost one in La Liga. They have conceded 11 goals in 10 games. It is no collapse, but it is a change. Until the tense 2-0 win at Villarreal last weekend, they had conceded in eight consecutive games – the worst run under Simeone. Two draws and a defeat in four games suddenly revealed a vulnerability that had been sneaking up on them, on edge for a while.

It is not just about Trippier of course, but his absence mattered. Only one man had occupied the right-back slot all season. The first game Trippier was absent, against Getafe on 30 December, three men did so. Since then, five have – Sime Vrsaljko, Yannick Carrasco, Ricard Sánchez, José María Giménez, and Llorente – and none entirely convinced. Those changes also conditioned everything else.

Previously playing just ahead and inside Trippier, an impressive understanding building between them, Llorente had been the best of those alternatives at right-back. But then he has been the best everywhere else too, Simeone all too aware that playing him in defence denies them an impact further up the pitch. To judge from the week’s preparations, Llorente may be chosen ahead of João Félix to play off the front against Madrid. His return to a more natural place could be key.

If Atlético’s season has been marked by absences, so has Real’s; if Simeone’s side may be marked by returns – Carrasco is also available again – so may Zidane’s. The Real Madrid coach said he has no explanation, but also said it is “not chance” that they have sustained more injuries than anyone else – just short of 40 this season. Eden Hazard, a phantom figure, irrelevant since joining Madrid, will be absent. So will Sergio Ramos and Dani Carvajal. The big question is whether Karim Benzema, who trained on Friday, makes it.

He may need to. The contribution from Real’s other forwards reads: Vinícius Júnior 3, Lucas Vázquez 2, Marco Asensio 2, Hazard 2, Mariano Díaz 1, Rodrygo 0, Isco 0. Their second-top scorer is Casemiro. Although they have improved defensively, clinching the kind of wins that won them the league title last year, they have struggled for goals. Last weekend – in which first played sixth, second played fifth and third played fourth – had been expected to load pressure on Diego Simeone’s side but instead ended with Atlético winning in Villarreal and Real failing to defeat Real Sociedad.

So now as derby day arrives the balance is tilted back in Atlético’s favour, just as Trippier returns and with the Atlético-supporting city mayor doing the honorary kick-off too. But they have never beaten their neighbours at the Wanda Metropolitano and if anyone knows never, ever to write off Real it is Atlético. Trippier knows that, too. He returns at last, having been beaten only once all season. Having only even been behind once, in fact. And that was against Real.