Two schoolboys have been filmed clinging to the back of a bus travelling along a busy Nottinghamshire road at around 30mph.

The ‘reckless and dangerous’ pair were seen hanging on to the Trentbarton service as it went through Kirkby-in-Ashfield last Thursday, May 13.

Liz Todd, 32, said she could not believe it when she spotted the youngsters – believed to be 13 or 14 – balancing on the back of the Nottingham-bound number 3.

The carer had been travelling home along Berry Avenue at about 3.30pm when she saw the pair riding on the rear bumper in the middle of busy school-run traffic.

She recorded the footage while driving behind them, and said she was scared of running them over.

Ms Todd said the youngsters precariously held on to the back of the vehicle for more than a minute, before jumping off and running away.

The mum-of-two, from Kirkby-in-Ashfield, said: ‘I just couldn’t believe my eyes that these two young lads were on the back of a bus doing something so stupid. 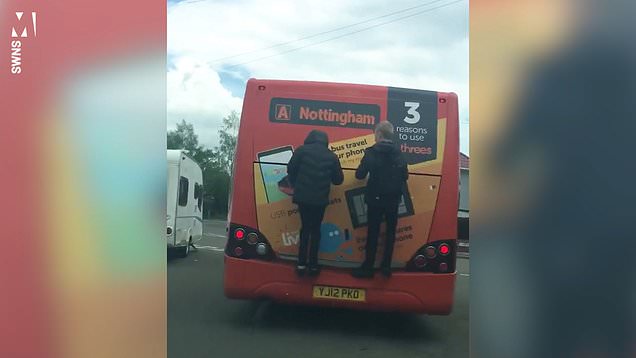 ‘I didn’t see them get on but I noticed them on the back after the bus stopped to pick up some people, so I think they got on then and hung on for about a minute.

Liz continued: ‘The bus wasn’t actually going that fast but they could’ve fallen off at any time. I was worried they would fall off and get run over by myself or another car.’

‘First one boy jumped off and then the other followed. In the video you can hear me swearing because I was so shocked.

‘I was shouting “are you mad, are you mad?”, but they ignored me. 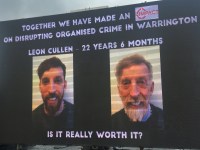 ‘I showed it to my daughter and her friend and they recognised the boys from year nine at a local school.’

She said the video racked up thousands of views on Facebook with some viewers suggesting it was funny.

Liz continued: ‘It’s only funny until someone gets seriously hurt.

‘But other people are saying it is disgusting.

‘It was selfish of them and dangerous for other people too.’

A Trentbarton spokesman said: ‘We were shocked to see this footage.

‘Not only are these boys endangering their own lives, they are also risking the safety of other road users.

‘Our driver would have been completely unaware of their reckless actions.’

He continued: ‘Our message to these boys in particular, and any other young people thinking of trying something similar, is simple – do not risk a broken bone or worse.

‘If our CCTV cameras record such dangerous behaviour, we will report it to the police.’

Lev before the game with France: I am calm, because Germany did what they wanted in the last 14 days
Skrinjar-player of the match Poland - Slovakia. Inter defender scored the winning goal
Czech Republic coach Shilgava: The main thing is that we survived the starting pressure of Scotland. Then we went into the game
Laporte wants to move to Barcelona and asks Man City to let him go
Krychowiak received a red card in Poland's match against Slovakia. This is the first elimination at the Euro
Scotland coach Clarke on 0:2 with Czech Republic: This is a good lesson, even though we did not come to learn
Chic about the goal from the center of the field: Watched the position of the goalkeeper during the match