But it did not prevent Nurmagomedov from retaining his lightweight crown on Fight Island with a second round submission in Abu Dhabi.

Unbeaten Khabib then announced a shock retirement following his 29th straight win, which was the first since the death of his father from Covid-19.

And UFC president White admitted Nurmagomedov, 32, deserved to go out on top, having gone to great lengths in order to headline UFC 254.

He said: "We are all lucky that we got to see him fight tonight because apparently he was in the hospital with a broken foot three weeks ago.

"I think he has two broken toes and a bone in his foot broken, that’s what his corner told me.

"He never told anyone, was just walking around as normal, he is one of the toughest human beings on the planet.

"He is the No1 pound-for-pound fighter in the world and you have to start talking about him having GOAT status with whoever else you think is the GOAT.

"When guys want to fight, the fight and when they don’t they don’t. 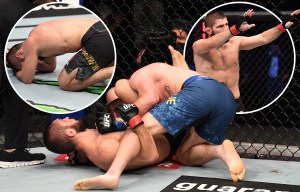 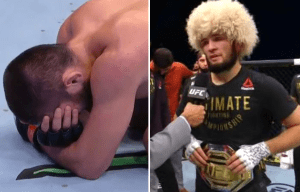 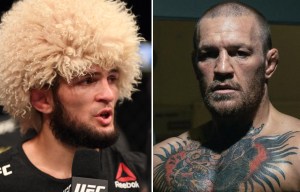 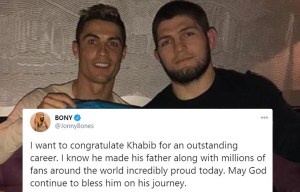 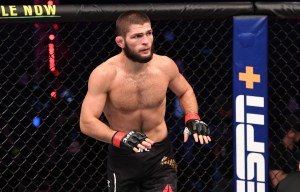 "You have got to give them time and let them heal mentally more than physically, with what he has gone through losing his father.

"We are all lucky to have seen him on Saturday night."

Nurmagomedov was left in tears after beating Gaethje, as he dedicated the win to his dad and coach Abdulmanap, who passed away aged 57 due to coronavirus in July.

But he said he feels unable to fight on without his influential father and mentor, who he had trained with since the age of eight.

Nurmagomedov said: “Today, I want to say this is my last fight.

“I want to say thank you to Lorenzo and Dana. All this UFC team, everybody, they made a great show.

Steve McManaman: Real Madrid are an aging team. They need new players if they want to reach their previous heights
ISCO could move to Sevilla in January. Lopetegui is personally Interested
Bilyaletdinov about the Champions League: Loco can leave the group. Unmotivated Bayern can be beaten in the 6th round
Zlatan Ibrahimovic: I Thought about retiring, but I wanted to change the mentality of Milan
Vasco da Gama sports Director: Balotelli will be like Maradona for us
Real Madrid won't buy Mbappe in the summer of 2021 due to the crisis (Le Parisien)
Ibra scores in 39, Buffon drags in 42, Ronaldo has no plans to finish. Is football really getting old?
Source https://www.thesun.co.uk/sport/13016370/khabib-nurmagomedov-broken-foot-toes-gaethje-ufc/

Horse racing tips: This longshot at Lingfield in the first race back with fans can start Wednesday with a bang

Alisson absence explained as Kelleher starts for Liverpool vs Ajax

MEP resigns after being caught at illegal sex party in Brussels

The Gatland favourites Wayne Pivac clearly doesn't rate as much

Strangers give hundreds to elderly woman who had last £90 stolen

How can I find a life partner if I never feel turned on by anyone?

The Real Housewives of Potomac: Who is the richest housewife in the series?

Pop-up school for US asylum seekers thrives despite pandemic