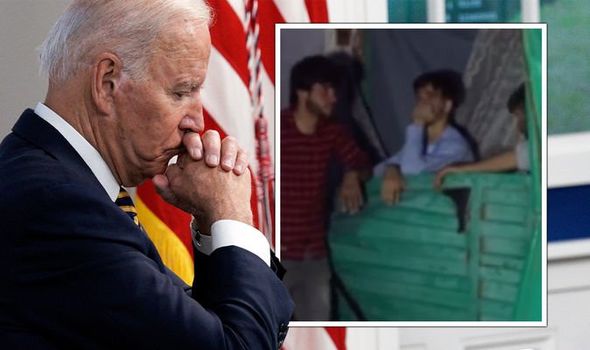 The US admitted its drone strike in Afghanistan killed innocent people (Image: SKY )
Sign up to receive our rundown of the day's top stories direct to your inbox

A defence official revealed the August 29 drone strike on an ISIS-K operative actually killed an aid worker and 9 members of his family, including 7 children. The youngest victims was only two-years-old. The strike was in response to a terror attack on Kabul airport on August 26, which killed at least 182 people.

In a press conference at the Pentagon, Command General Kenneth McKenzie explained the error

Intelligence “indicated” ISIS-K operatives were unloading a Corolla in front of a compound.

US intelligence assessed the Corolla “contained explosives”, and drove between points illustrated on a map in the conference.

At 4:39pm, the vehicle dropped off a passenger, then drove to its final destination three kilometres from the airport. 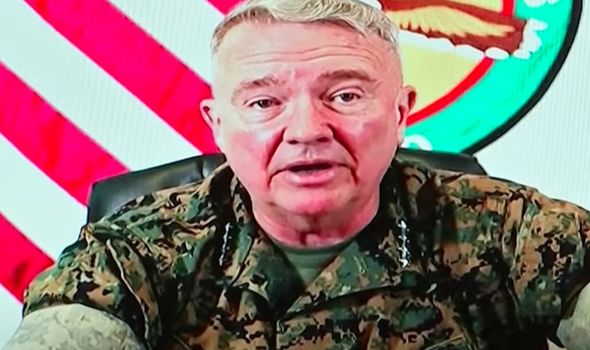 The US was “concerned” the vehicle “could move quickly” towards the airport, and was struck shortly before 5pm.

A “single hellfire missile” was fired in a way “to minimise civilian casualties”, but at 4:53pm it exploded “in a way” not typical for the explosive.

Gen. McKenzie said the explosion was akin to a “massive fireball”, with a second blast following moments after the missile strike.

They initially believed the second blast was proof of explosives, but Gen. McKenzie suggested the “most likely” cause for the larger blast was the vehicle’s oil tank.

The official admitted: “Our investigation now concludes this strike was a tragic mistake.”

US reports ahead of the press conference said that no disciplinary action is expected.

The New York Times first reported the vehicle struck belonged to Ahmadi, a 43-year-old aid worker who worked with the US, and he and nine of his family members were obliterated.

It then suggested as he pulled into the driveway of the home he shared with his family and three of his brothers' families, several of his children and his brothers' children ran out to greet him, according to family members.