When film-maker Julien Temple met Shane MacGowan to discuss making a documentary about his life, the 62-year-old, hard-living former Pogues frontman was watching a David Attenborough programme about snow leopards. The image has stayed with Temple: many times, while making Crock of Gold: A Few Rounds With Shane MacGowan, he found himself feeling like a naturalist stalking an elusive species. The film, though, is a hugely entertaining and revealing one. While MacGowan wouldn’t sit still for Temple, he would for friends and fans such as Johnny Depp, Gerry Adams and Primal Scream’s Bobby Gillespie. Temple has made acclaimed documentaries on the Sex Pistols and the Clash, as well as the cult feature film Absolute Beginners. He’s 67 and lives in Somerset.

Just how chaotic was it making a film with Shane MacGowan?
I knew it was going to be difficult going into it, so I can’t really blame anyone other than myself. Obviously, periods of turbulence were experienced. He’s a difficult guy on a lot of levels, but I guess that’s what makes him great. If you can weather the abuse and stay focused on the film, he’s definitely a subject who deserves respect. And he’s a subject for an exciting film, I believe.

When did you realise you’d have to find a different way to capture the snow leopard?
Shane made it very clear he didn’t want to do any interviews. But Johnny [Depp] was great because he got him talking and then they were suggesting other people that Shane might like to talk to. And those conversations were interesting because, rather than a sit-down interview, you got to see other versions of Shane. He’s one thing with Johnny – a buddy in a bar, drinking on equal terms – and he’s another thing altogether with Bobby Gillespie. Good old Bobby, he let us keep it in the film, but it wasn’t a comfortable experience. Then again, he’s almost like a schoolboy with Gerry Adams, it seems to me.

MacGowan has said the film makes him look “miserable”. Do you think that’s fair comment?
Um, I filmed what I saw. I certainly didn’t want to demonise him, I didn’t want to canonise him. There is a sense of tragedy in the life as well as triumph. It’s the contradictions that make the film interesting: the punk public-school boy; the Irishman deeply passionate about Ireland but brought up in London. These are compelling contradictions that make people tick and, in Shane’s case, inform his songs and his lyrics.

MacGowan and Depp have been friends for more than 30 years. Does that make sense when you see them together?
I think it makes sense. They are both very interested in reading, they share an incredible love of music and they like a drink, obviously. They’ve got a good piss-taking sense of humour about each other that is engaging to watch. That session [in the film] with Johnny, I think was eight hours, but we only use about five minutes from it. We all went to bed at 5am and they were still there at midday the next day. Incredible stamina.

After Depp’s recent libel trial, was there any concern that his involvement in this project could be a distraction?
I’m against any kind of domestic abuse obviously, whoever’s on the receiving end of it. But he was very supportive on this film. And without him, it probably wouldn’t have happened. So I’m grateful to him in that respect and he’s always been a good friend of mine.

Radio 1 has decided to censor the Pogues song Fairytale of New York this year. Where do you stand on that?
We bribed them to do that. We paid good money to do that to coincide with the release. But no, it happens every year, doesn’t it? It’s become a Christmas ritual whether they’ll ban the words or not. And it’s a difficult one, isn’t it? I’m against censorship of most kinds, but I’m very aware that people’s rights and sexual identity shouldn’t be trampled on or abused. 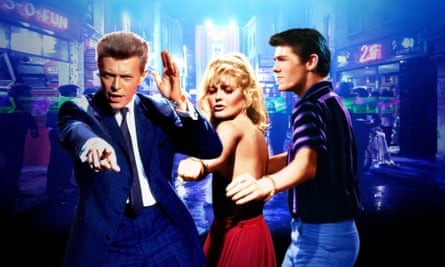 Your 1986 film Absolute Beginners was panned when it was released, but has some high-profile admirers, such as Martin Scorsese. How do you feel about it now?
Well, it’s been an albatross around my neck since I began making films. It’s still difficult for me to get funding because of it. I had to leave the UK. Scorsese helped me get a green card actually. I couldn’t get work here. I was very much the one who’d been blamed for destroying the British film industry. Now I would be proud of that, but it was a little overwhelming at the time. So I have mixed feelings: it has certainly had a huge impact on my career, forcing me, possibly, to go in directions that I wouldn’t have gone otherwise. If it had been successful, I think I could have been found upside down in a Jacuzzi in the Hollywood Hills. So I’m lucky I’m still around, hungry to make films.

You’ve long wanted to make a film about Ray and Dave Davies from the Kinks. Do volatile individuals make the best subjects for entertaining documentaries?
There’s an argument for that. I was surprised to find that Shane saw the Pogues in terms of this crusade, this mission, quite a serious thing to underpin what he was doing with that band. And I think Ray [Davies] is a very deep thinker as well. It’s a difficult industry to be serious in – not necessarily taking yourself seriously, but your work seriously. So yes, I certainly find people who are considered difficult very rich subjects for a film. Because that energy they are willing to use to defend who they are, in whatever way they can, is an interesting thing to understand.

Crock of Gold: A Few Rounds With Shane MacGowan is in cinemas from 4 December; on digital and DVD from 7 December

Klopp on 0:1 with Burnley: A real punch in the face. Losing this match was not easy, but Liverpool could
Atletico leads Real Madrid by 7 points in La Liga and has a game to spare
Liverpool do not win 5 matches in the Premier League in a row. Klopp's team repeated the worst streak in 4 years
Liverpool's 68-game unbeaten run at home in the Premier League has ended
Liverpool do not score 4 consecutive Premier League matches
Milik moves to Marseille. He was photographed with a shirt with the 19th number
Suarez scored 10+ goals in the league for the tenth time in a row
Source https://www.theguardian.com/film/2020/nov/29/julien-temple-crock-of-gold-shane-macgowan-documentary-interview