Joseph Marcell’s life has been dominated by a lot of Shakespeare and by one smash-hit sitcom. So when we meet, I bring the lyrics to The Fresh Prince of Bel-Air’s theme song, which some joker online has translated into blank verse. “In west Philadelphia born and raised / On the playground was where I spent most of my days” has become “From western Philadelphia I hail, / where in my youth I’d play upon the green” and so on. Sitting opposite me in the bar of London’s Young Vic, the 73-year-old actor laughs sweetly, stroking his frosted beard as he reads the print-out. “Oh heavens!” he says. “May I keep it? I’ll have to show Will.”

That’s Will Smith, of course, who played an ebullient goofball living with his affluent Californian relatives, while Marcell was Geoffrey, the family’s withering English butler. When I mention one of his driest rejoinders – “Run Geoffrey! Fetch Geoffrey! Perhaps you’d like me to catch a Frisbee in my teeth?” – he summons the character right there in the empty bar, baring his fangs as he savours that final word, then laughing at the memory.

Fresh Prince ran for six years from 1990. “There was not one day when I went to work and wished I was somewhere else,” says Marcell. At its height, the show attracted US audiences of nearly 20 million. Even now, strangers in the street will call out Smith’s greeting to Geoffrey: “Yo, G!” How constant is the attention? “Put it this way: if I walk into a room and I’m not recognised, I get really cross!”

But it is the Danish prince, rather than the Fresh one, that has occasioned our meeting today: Marcell is currently delivering a tender, funny Polonius at the Young Vic opposite Cush Jumbo as Hamlet and Adrian Dunbar (Line of Duty’s Ted Hastings) as Claudius. “Polonius is an honest man,” Marcell says. “I try to show that bond of family in him. He really does care about his children, and he protects Ophelia in the best way he can.” 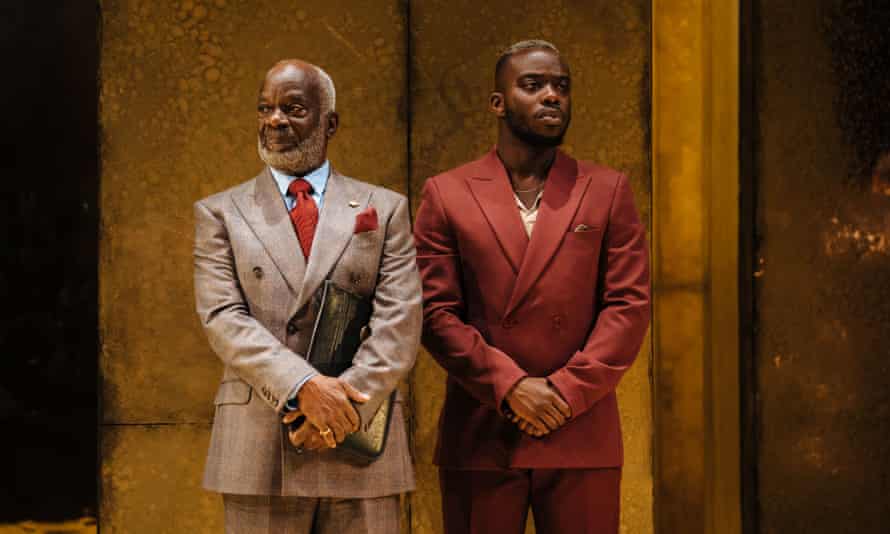 ‘An honest man’ … Marcell as Polonius, with Jonathan Ajayi as Laertes, in Hamlet. Photograph: Helen Murray

To see a Black woman as the prince is revelatory, he says. “The beauty of what Cush is doing is that you forget she’s female because of her skill in delineating the character,. Personally, I celebrate the fact that I’ve lived long enough to see this happen. It’s time. One of the most difficult things, especially with the King plays, was that you were always being reminded by people that this was English history, that kind of nonsense. It’s nice to see that’s changed. What’s that Sun Tzu quote? ‘If you wait by the river long enough, the bodies of your enemies will float by.’”

In 2013 at the Globe, where he is also on the board, Marcell became one of only seven performers of colour to have played King Lear in Britain since 1930, but he never had the chance to give the world his Hamlet despite several stints at the RSC. Were there many other parts he wasn’t invited to play? “Oh, absolutely. It was servants, et cetera, I was given. I tried not to have any pretensions. I thought of the RSC as a resource I ought to use. I’m not being Pollyanna-ish but I had a much larger vision for what I wanted to do with my life than what they had to offer.”

Other actors have spoken of similar treatment they encountered at the company: Ben Kingsley once recalled being told that he would “be very good at playing servants”. Marcell is diplomatic, even circumspect, when discussing his own experiences. “I’m dodging your question because I don’t know how to put it, and a lot of it is guesswork,” he says. “But I think we were not considered good enough to speak the verse. That had a lot to do with it. You were told certain things might not be possible. The phrase used in my case was, ‘Of course, in a fair world …’”

What can you do with a comment like that? “Tell ’em to fuck off!” he says, dropping the diplomacy. “I’m lucky enough that I don’t need the RSC. I can go to Oregon, Washington DC, California. They’ll let me play what I want.” Indeed, it was only after leaving the company that he became one of the first Black Othellos on the London stage, in a 1984 production at the Lyric Hammersmith with Siân Thomas as Desdemona. His friend Patrick Stewart told him at the time: “You know, I’ve never seen Othello played by a Black person before.” 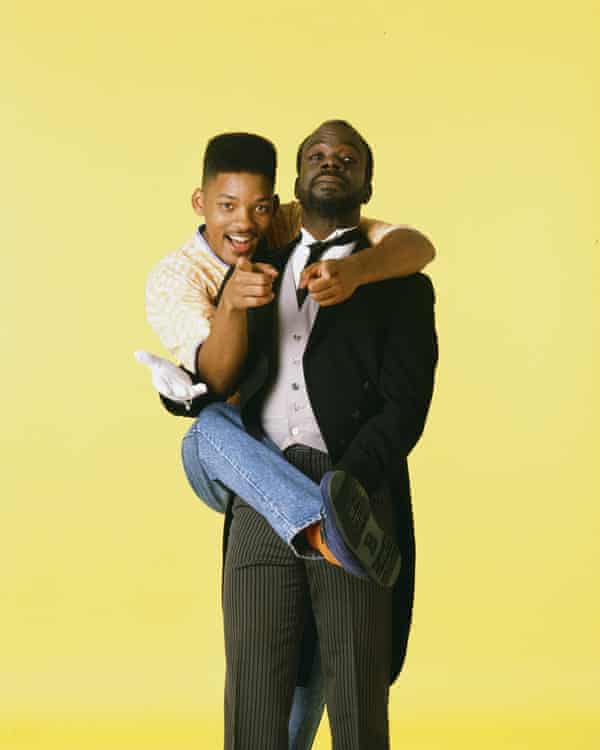 ‘Yo G!’ … with Will Smith for season one of The Fresh Prince of Bel-Air. Photograph: NBC/NBCUniversal/Getty Images

What did he bring to the Moor? “It was the first time the world had seen a self-possessed Othello,” says Marcell. “He was not a victim, and the idea of the ‘noble savage’ was not part of my construction of the character. I presented him as a man who was good at what he did. It’s just he was a little insecure. You didn’t feel sorry for my Othello – you felt sorry he had this tradition which made him perhaps a little gullible.”

Discrimination had been part of Marcell’s life ever since he moved from St Lucia to London with his family in the mid-1950s, though initially the big shock was climate-related. “When we got to our road in Bermondsey, there were no leaves on the trees,” he says. “It was terrifying.” Then his father explained to him and his siblings that there were certain areas they should avoid. “That’s when it became really scary. He’d say, ‘If you go into a place and the white people start saying things, just leave. Don’t stop. Don’t talk. Just go.’ Gradually, your instincts take over.”

He was working as an electrical engineer when he had his lightbulb moment and decided to become an actor. It happened after he and his friends strolled past a West End marquee advertising a show by the American Negro Theatre. “Someone said, ‘Let’s go in.’ So we paid half a crown and sat up in the gods. I don’t remember what it was about, but seeing Black actors on stage was extraordinary. It made me think, ‘That’s what I want to do.’”

Marcell joined the RSC at the start of the 1970s during Trevor Nunn’s renowned Romans season, and returned again a decade later. His career has encompassed TV roles in everything from the groundbreaking Black British drama series Empire Road to EastEnders and Desmond’s. On stage in Bath, he played the fearsome Zimbabwean dictator in Breakfast with Mugabe, while in Leicester he was Willy Loman in Death of a Salesman. His most fateful stage work, though, was on the RSC’s American tour in the late 1980s, when Patrick Stewart directed him as Angelo in Measure for Measure and as the bin-dwelling Nagg in Beckett’s Endgame. It was here that Marcell was spotted by producers casting a new NBC sitcom: in a bin one moment, in Bel-Air the next. 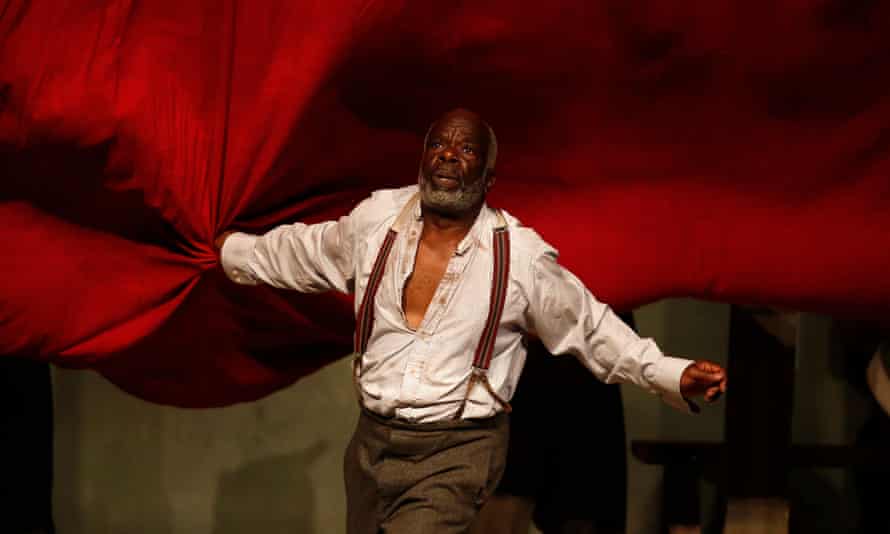 Trailblazer … as King Lear in the Globe’s production in 2014. Photograph: Darrin Zammit Lupi/Reuters

What were his first impressions of the show’s star? “I thought Will was a total bloody lunatic,” he splutters. During Marcell’s audition, Smith began improvising wildly. “I turned and said, ‘Is that how he’s going to do it?’” This is recounted in his crispest Geoffrey voice. “Everyone fell about. Including Will, who said, ‘Yeah man, that’s how I’m gonna do it.’” Years later, Smith told him: “We knew you were OK, but that was the moment we knew you were exactly right.”

Most of the surviving cast members meet up every few years, which is convenient for Marcell, who divides his time between the UK and his other home in California. He is just back from there, in fact, where he has been shooting a new series for Ryan Murphy, the pop-culture titan with whom he worked on Ratched, the One Flew Over the Cuckoo’s Nest prequel made by Netflix.

Marcell talks affectionately about his old sitcom colleagues, especially Smith. “What I loved about him – and still do – is that if Will says it’s so, then it’s so. He’s an honourable man.” Could he be persuaded to do Shakespeare? “Maybe. I did want him to play Mark Antony but he was busy with Independence Day.” Does he have an Othello in him? “I think he does, yes. But he needs somebody who can handle him on stage.” He is all but tapping his nose now. “I have plans,” he says. Leave it to G.