Arteta has never managed before, and has spent the past three seasons working under Pep Guardiola at Manchester City.

He emerged as a favourite to replace Unai Emery as Gunners manager just days after the Spaniard was sacked, and agreed a three-and-a-half year deal with the club this week.

On Friday, Arteta spoke to the press as Arsenal boss for the very first time.

He revealed his delight at being back at the club he represented as a player and outlined his plans to turn things around in north London.

But Tottenham boss Mourinho rained on the Spaniard's parade just hours later when he suggested Carlo Ancelotti should have got the job.

Mourinho said: "The only point I can find – and it is for us to laugh a little bit – is that years ago the best managers were the guys with more victories and now the best is the guy with the fewest defeats.

"So Ancelotti has three Champions Leagues, won the league in Italy, France and England and won cups here and there – but Ancelotti has lost, I don't know, 200 matches?

"I think now it is not about how much you won, it is about the matches we didn't lose. So probably the best managers now are the managers with zero defeats.

"I cannot find another reason."

Arteta has a big job on his hands at Arsenal, with the club currently floundering down in tenth in the Premier League.

The Gunners take on Everton this weekend, but interim boss Freddie Ljungberg will remain in charge for one last time while Arteta watches from the stands at Goodison Park.

On his aspirations at Arsenal, Arteta said: "The first thing is a little bit to change the energy. Last week I was here with Manchester City and I was a little bit down after the game when I felt what was going on.

Carlo Ancelotti had been in the running to get the Arsenal job (Image: AFP via Getty Images)

"We have to build a culture that has to sustain the rest. If you don't have the right culture, in the difficult moments, the tree is going to shake, so my job is to convince everybody that this is how we are going to live, and if you are going to be part of this organisation it has to be in these terms and in this way.

"And after that, we can talk about other things. Obviously now we need an immediate impact, we need to start winning games, we need to start to raise the level of confidence of the players, and finally we need the fans.

"We need to engage them, we need to be able to transmit with our behaviours, our intentions, what we want to bring to this football club. 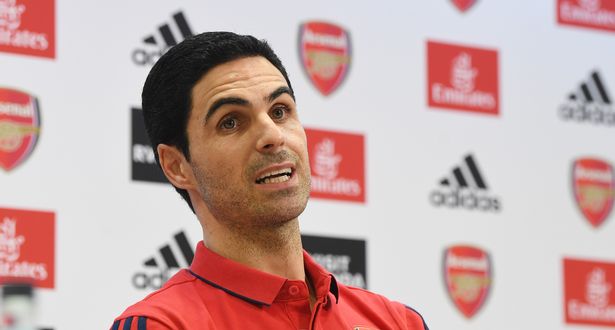 Arteta spoke to the press as Arsenal boss for the very first time on Friday (Image: Arsenal FC via Getty Images)

"I think that's the only way, where we give them a little bit, they give us a little bit, and suddenly we feel that connection, because when plug plug these two things together, it is so powerful.

"I've been outside this football club and when you're outside you look at it and you say 'wow, this is massive'. So this is how I'm feeling.

"There is so much to do, I am so excited, and I think we have the right team, I have many conversations with the senior people at the club, and I feel we're on the same path. So I have a good feeling."

What time is the Europa League draw? Manchester United, Wolves and Rangers to learn opponents

Best prom dresses and eveningwear under £100