The doctor's outfit consisted of an ivory coat and a matching dress that were custom-designed by Gabriela Hearst.

Her silk wool cady dress was embellished with embroidery of the federal flowers from each state and territory for the United States, the designer said in a press release.

She also wore leather gloves and a double-breasted cashmere jacket.

"The color blue was chosen for the pieces to signify trust, confidence, and stability," according to the design house.

"The look was carefully crafted by a small team in the heart of New York City's Garment Center and hand-finished by O'Neill in her West Village studio."

The Biden family turned heads on Inauguration Day with their choice of outfits.

Hunter Biden's wife, Melissa Cohen, turned heads as she stunned in a red coat to celebrate her father-in-law's big day.

Melissa was pictured carrying the President's newest grandson, an eight-month-old reportedly named Beau in honor of his late son.

She was pictured wearing a chic red coat as she was snapped talking with Hunter, 50, on stage at they arrived for the 59th Presidential Inauguration.

The South African filmmaker also appeared to be wearing large gold hope earrings and a stylish rose gold mask as she could be seen with the rest of the clan.

Her outfit offered another a splash of color on the inauguration stage as both incoming Vice President Kamala Harris and Hillary Clinton opted to wear purple.

It is believed the use of the color - a mixture of red and blue - was attempted to be a show of bipartisanship. 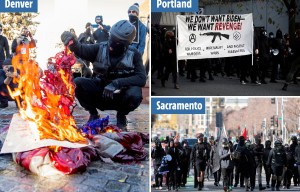 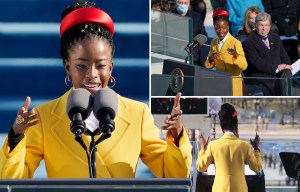 The outgoing First Lady Melania Trump meanwhile opted to wear all black as she left the White House.

Her outfit was completed with a $50,000 handbag as her and Donald left the White House as left Washington DC - snubbing the inauguration.

Boyarintsev about the time in Nosta: The metallurgical plant was puffing at the top of its lungs. The sediment on the field fell out, sometimes
Fonseca about 1:2: Roma failed in the first 20 minutes and could not cope with the high pressure of Milan
Director of Akhmat about 1:2 with Dynamo: Logic is not always present in everything
National team coach Panikov on Golovin: For actions at speed with the ball-top. The more, the better the result
Manchester United have not lost 20 consecutive games away from home in the Premier League. Up to Arsenal's record of 7 games
Pioli on 2-1 with Roma: Milan could have scored more
Simeone repeated Aragones record for wins (308) with Atletico, having played 100 games less
Source https://www.thesun.co.uk/news/13813531/jill-biden-white-inauguration-outfit-message/