Jacinda Ardern and Judith Collins are preparing for the first TV debate of the New Zealand election, amid a campaign dominated by coronavirus.

The pair will face off in a debate in Auckland held on the same day that Covid-19 restrictions eased in most parts of the country, but not the nation’s largest city, which has been battling an outbreak.

The prime minister and Labour party leader will meet National party leader Judith Collins in the TVNZ studios in Auckland at 7pm for the debate which will last an hour-and-a-half.

It is the first of four planned debates between the leaders and will be hosted by veteran radio and television broadcaster John Campbell, who has moderated leaders’ debates since 1999. However, there will be no live audience in the studio due to level 2 restrictions, a TVNZ spokesperson said.

Ardern, the clear favourite in the election, is an experienced debater and earned a reputation for wit and playfulness during the last campaign in 2017. Last month, she was named the world’s most eloquent leader by the Development Academy.

Collins is a long-time lawyer who is well known for her acerbic tongue and mischievous retorts and often lights up in confrontations in parliament, or with the media.

Theodore Zorn, professor of organisational communication at Massey University, described Collins as “highly articulate, forceful in her speech and quick on her feet” in a piece for the Conversation. However, because she had not been leader for long she was viewed as untested.

“As Ardern and Collins are no doubt aware ahead of their debate, history often reserves a special place for those able to capture the zeitgeist with their words and ability to deliver them,” Zorn said.

The election will take place on 17 October after being delayed for a month due to the Auckland outbreak.

When asked how they were feeling ahead of the event, Ardern said her mind was preoccupied with running the country, while Collins said she was looking forward to it. 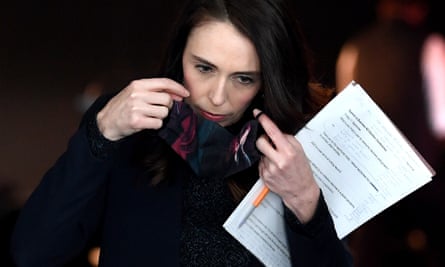 Collins is the third National party leader this year and is likely to criticise Ardern’s government for issues such as the failure of the affordable housing KiwiBuild scheme, and the resurgence of Covid-19 in Auckland, blamed by many on lax border controls.

Collins has vowed to tighten borders, reduce taxes and boost the economy. While many of Labour’s Covid-19 strategies are similar to the National party’s, Ardern remains committed to eradicating child poverty, increasing housing affordability and combating climate change.

Collins is more liberal than previous National party leaders and she and Ardern have much in common, having both voted yes to legalising abortion, same-sex marriage and euthanasia. Collins, like Ardern, has described herself as against “all forms of racism and sexism”.

Ardern is riding high in the polls after steering New Zealand through the Covid-19 pandemic with fewer than 30 deaths, and 2,000 infections. A 1News-Colmar Brunton poll in late July had Labour on 53%, well ahead of opposition National’s 32% in the first poll by the company with Collins as leader.

The survey isn’t as shocking as a Newshub-Reid Research poll earlier in the month that had Labour at 61%, the highest result on record. A new poll was due to be released on Tuesday evening.

Collins, 61, is a famously tough, take-no-prisoners party stalwart, nicknamed “Crusher Collins” for her desire to destroy the cherished cars of boy racers. She is also known for her tough stance on crime, supported the introduction of Tasers to the police force, and argued for officers to have better access to firearms.

In a recent interview with the Guardian, Collins praised Ardern as a “gifted communicator”, and said she relished rising to the challenge of matching Ardern’s star power.

“I love the thrill of the challenge – I really love that,” Collins said. “I am a person of confidence. I like to get in there and get things done.”

Political analysts have said that the general election campaign lacks spark this year, with Labour polling so far ahead of the National party.

On the campaign trail, both Ardern and Collins have presented as unusually muted, though excitement has been tricky to generate with bans on large gatherings of people and the requirements for many to wear face masks and practice social distancing.

Experts said live televised debates were able to hold the attention of voters who usually weren’t interested in politics, and viewers would be watching for leaders “being quick on the spot and being able to have good energy and bring that performance”.

Many voters used debates to make a gut instinct decision on who they’d prefer as their leader, and likability and charisma was a strong factor.

Andrea Pirlo: Messi is still on top. With such players, we must hope that they do not have the best day
The figures of Robert Lewandowski, which frightens not only the locomotive
Who will be the top scorer in the Champions League?
La Liga President on the departure of Ronaldo and Neymar: it is better to leave because of taxes than because of anything else
Kane and Son gave each other 29 assists in the Premier League. Only Lampard and Drogba (36) did it more often
Veron about Messi: Playing in Barca gives him discomfort
Mitryushkin on the move to Fortuna: Germany is a country of goalkeepers. I can learn a lot here
Source https://www.theguardian.com/world/2020/sep/22/jacinda-ardern-and-judith-collins-to-face-off-in-first-tv-debate-of-new-zealand-election