It’s up to parents, NOT schools, to teach their children how to eat well

WHEN it comes to children eating healthily, parents have the main role to play.

I guess we have known that since way back, even when Jamie Oliver tried to banish Turkey Twizzlers in schools, only for outraged parents to sneak chips and Mars bars through the school fence in protest.

We are the ones who feed our kids every day. But we are also their role models in terms of food choices. If we breakfast on Pringles, pizza and doughnuts then the odds are they will too.

By the same token, if we start the day with porridge, seeds and fruit, they’ll likely grow up assuming that’s the best way.

School is a huge influence, too, and it is great Jamie did succeed. In fact, he started a nationwide trend of schools providing and promoting a healthy diet.

But some schools are taking it too far. At one primary I know of, teachers and dinner ladies patrol the lunchtime tables hunting out contraband such as sugary drinks and chocolate, to confiscate it then attempt to shame the parents into submission with letters about their snack misdemeanours.

Other schools, it has emerged, are taking it even further than that, with pupils being followed when school has ended.

Yes, following them from the school gates to the high street to intervene if they are seen going into a takeaway.

Children at Cotham School, in Bristol, have been told they are not allowed to enter at least three convenience stores and a takeaway between 2.45pm and 3.15pm.

Not only that, but school staff acting as bouncers have been patrolling the shopping parade and standing in high-vis jackets outside the chippy.

The school says it is using powers given by Michael Gove’s 2011 Education Act, which allows it to rule over the conduct of pupils in certain circumstances outside the school gates.

The school’s business manager, Allison Crossland, said teachers have the authority over what the pupils do even after the end of the school day.

And they are doing so to, “ensure the safety of children on their way home from school”.

According to one takeaway owner, teachers went inside and started giving out detentions to children they found in there, although the school denies this.

But the takeaway shops on the street say they have seen a drop in business since Cotham School staff started patrolling the streets and, unsurprisingly, they are up in arms as a result.

I’m not saying it’s great for kids to snack on high-fat or sugary food when they leave school. Of course it’s not.

But is it really the responsibility of their teachers to make sure they don’t? Is it right teachers can rule on what your kids eat when they leave school?

I don’t think so. And if I was a parent of a child being told what to eat by someone other than me, I’d be furious.

I know some people will say this comes down to money, that it’s more expensive to eat healthily.

And yes, it is cheaper and easier to snack on sugary foods such as chips and biscuits.

Some might say that school dinners are not satisfying enough.

Parents need to take it upon themselves to learn about how to cook and eat healthily.

You don’t have to spend a fortune to eat well. Look at Jack Monroe, who has written a book on how to cook well with tinned food.

There is no doubt something needs to change when it comes to kids and food.

The number of obese people in the UK has almost doubled in 20 years. Rather than paying staff to patrol the chippy, I would vote to bring back domestic science and teach all children how to cook properly from scratch.

But as parents, it is our duty, and no one else’s, to look after our children and teach them how to eat well.


It's NATO lads grew up

I KNOW they were doing important work at the Nato summit and all . . .

But bloody hell, it was easy for the onlooker to be distracted, wasn’t it, with all the world leaders’ power-mongering going on?

First of all there were the handshakes. The amount of one-upmanship that can occur in a simple greeting is staggering: Who gets to overpower who by making sure their hand is firmly on top throughout the shake.

Who lets go and de-shakes first, and who insists on prolonging the handshake so enthusiastically that it is impossible for the other party to get away until the prolonger is good and ready.

Donald Trump famously shakes LONG and HARD. I think it is called the Power Shake and is often employed by people who think the harder they squeeze, the more important and manly they are.

They hold on to show they have control over you. But at this summit, Trump possibly met his match with Canada’s Justin Trudeau, who was repeatedly filmed gripping people’s hands so hard that both sets of knuckles were going white.

Mind you, that is better than the limp shake. No one likes nor trusts someone with a limp handshake. It’s like shaking hands with a person with no bones.

But my least favourite is the sweaty-palm shake.

And then there was the footage of Trudeau, France’s Emmanuel Macron and Boris Johnson apparently gossiping about Trump like a bunch of naughty schoolboys.

It all left me feeling like they need to grow up.

And then I saw the photo of our magnificent Queen and all 29 Nato allies. Guess how many women were in the group? I counted seven, including the Queen. I can’t help but think if there were more women involved, less of this childish stuff would go on. 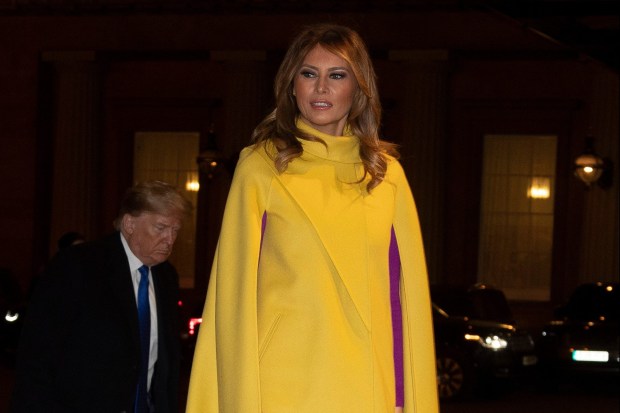 I’M sure being married to Donald Trump is not everyone’s idea of fun.

But it comes with at least one benefit: An utterly fabulous clothing budget!

I have never seen Melania in the same outfit twice (and I don’t just mean clothes, but also bags, shoes and even sunglasses).

She wore a coat a few months ago which I quite liked the look of, so I thought I might buy it.

I looked it up online and it was £7,500, for something made out of wool. I passed! Mind you, whatever the cost, she looks great and oozes class.

Is it worth it?

I SHUDDERED when I read the story of Jayney Nascimento, 48, who borrowed £20,000 from her mother for liposuction in the hope of having skinnier legs.

But instead of getting the legs of her dreams, she contracted a deadly flesh-eating bug called necrotising fasciitis, which left her fighting for her life and she almost had her legs amputated.

Jayney, an administrator from Shropshire, says: “I paid for an expensive cosmetic procedure so I would feel comfortable showing off my legs.

“Instead, I nearly lost them and I hate them more now than I did before the operation.”

Talk about a sobering reminder that all cosmetic surgery is invasive and has potentially life-threatening side-effects. Is it really worth it?

I’m guessing this woman would say no.


Christie is still a booty at 65

CHRISTIE Brinkley was photographed looking absolutely spectacular at an event in New York.

Wearing this black, trenchcoat-style mini- dress, with bedazzling purse and sparkly calf boots she seemed about half her age, which is, incredibly, 65.

If I have half of her joie de vivre and charisma at that age, I will be over the moon.

And so should she be.

POOR Rhodri Giggs, who told this week about the devastating effect brother Ryan’s affair with his wife has had on the family.

Quite understandably, he hasn’t spoken to footballer Ryan, 46, in eight years, since the affair with Rhodri’s wife Natasha was revealed.

But shockingly, he said his mother Lynne hasn’t spoken to him in the past eight years.

Rhodri, 42, says she has taken Ryan’s side: “Because I haven’t got 35 medals, I haven’t played for Manchester United for 20-odd years and own a big house.”

Turns out this was a triple betrayal. His wife. His brother. His mother. Your entire support network gone overnight. Shame on his mother if that is true.

DID anyone else wince over Jeremy Corbyn vowing to confront Donald Trump at this week’s Buckingham Palace reception?

It was about the sanctity of the NHS, which Trump does not appear to be interested in having anything to do with anyway.

In the end, Corbyn didn’t get a chance as he was kept firmly away from the US President, possibly after publicly announcing his intentions.

But the US is our main ally and it’s quite shocking that on a visit by the President, the opposition leader has to be kept away from Trump because he can’t be trusted to act with respect.

What a calamity it would be if he became the leader on December 13.

Bluff, gruff Princess Anne is nobody's fool and a jewel in the Crown

It's time to choose between a Tory majority... or dead-end calamity

Taking care of our vets

JUST when I thought my admiration for black cab drivers had reached a peak, I got an invitation to a Christmas lunch organised by the Taxi Charity for Military Veterans.

They offered Christmas lunch – turkey and all the trimmings – to 150 veterans who were taken to the venue by a fleet of black cabs driven by volunteer cabbies.

It is so heart-warming that it actually brought a tear to my eye.

Human rights report to oppose extradition of Julian Assange to US

Top 20 West End Shows of all time include Cats, Phantom of the Opera and Lion King

Cuba and Jamaica struck by their ‘biggest earthquake on record’

Alison Phillips: Anne Sacoolas and Prince Andrew are now prisoners of no conscience

UK Huawei decision appears to avert row with US

Daycare worker wrote ‘out of diapers’ message on toddler’s belly

The European Union’s new muscular militarism in a ‘dangerous world’

Ironically enough, Democratic rules are only benefiting Mike Bloomberg. They need to be changed

Dad ‘starved baby daughter to death because she was too weak to help on farm – and mom left it happen’, cops say

Woman arrested after three children aged 9, 7 and 3 found dead at home in Dublin

Dad trapped in Travelodge lift thought he was 'going to die'

Coronavirus UK: Foreign Office warns against 'all but essential’ travel to China

Could Remainers have got a softer Brexit by abandoning EU membership?