But moviemaking has come a long way since Charles Ogle's appearance as the Frankenstein monster (popping up from a smoking cauldron) 110 years ago.

Charles Ogle as the monster in Frankenstein (1910)

That said, some movies have retained their power to shock.

Here's our selection of the ten most terrifying movies - in order of the date they were made - to watch this Halloween:

10. Nosferatu may be 98 years old but Max Schreck's bald-headed vampire count remains the stuff of nightmares.

Ironically, the makers of Nosferatu were sued by the widow of Dracula author Bram Stoker for plagarism.

In a bid to avoid a costly court case the company that made the film - Prana Film - declatred bankruptcy - but that didn't stop judges ordering all copies of the movie to be destroyed.

Luckily for horror buffs copies in America - where the film was awaiting a release - survived (because Dracula was already out of copyright in the US) and a masterpiece of the macabre was preserved.

Schreck's make-up has become iconic. It was reused by Werner Hertzog for his so-so remake of Nosferatu in 1979 and a variation appeared the same year in Salem's Lot. 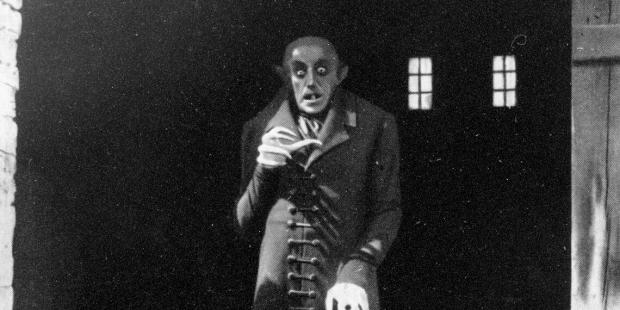 9. Frankenstein: Bela Lugosi kicked off the Universal horror era with Dracula in 1931 but it was the follow-up which really sent audiences reeling from their seats. Lugosi famously refused the role of the monster (but not before he filmed a test reel in the make-up) so the role went to little-known British actor Boris Karloff.

Universal threw money at Frankenstein and the result is hugely impressive. The black-and-white photography is terrific and the expressionist sets are superb.

The death of a little girl was censored in the UK and a fully restored print was not screened here for decades.

The sequel, Bride of Frankenstein, is a masterpiece in its own right but ramps up the laughs at the expense of the chills.

8. The Cat People: Val Lewton made a series of low-cost horrors for RKO in the 1940s. For budgetary (as well as artistic) reasons they majored on psychological scares rather than ambitious make-up.

Cat People is the best of the lot. The story of a strange woman (Simone Simon) who turns into a panther when she is aroused, Cat People is a masterwork of suggestion.

The scene where the heroine is stalked which ends with a jump shock is so good it became known as 'The Lewton Bus' because it was reworked by so many other films.

7. Dead of Night: Ealing may be best known for genteel comedies but it's sole horror entry is one of the very best.

A portmanteau work woven around a never-ending nightmare, Dead of Night was the first Brit horror after the Second World War and it blew audiences away.

All the stories are good (even the comedy element) but 'Room for one more inside' and the ventriloquist's dummy are the best.

6. Dracula: Hammer Films became the world's leading exponents of horror throughout the 1960s and into the early 1970s off the back of this masterpiece.

The previous year's Curse of Frankenstein had laid down the template - garish colour, blood, violence and more than a suggestion of sex - but it was Dracula that cemented the studio's reputation and made stars of Peter Cushing and Christopher Lee.

5. Psycho: Alred Hitchcock wanted to make Robert Bloch's novel so badly that he agreed to make it on a shoe-string. Using a crew largely culled from his television show, Hitch fashioned a chilling portrait of insanity.

The shower scene (which may - or may not - have been directed by Saul Bass) has been copied hundreds of times - but never bettered.

4. Night of the Living Dead: Former documentary film-maker George A Romeo shook up horror cinema with this black-and-white zombie shocker.

Until Night zombies had been voodoo-inspired shambing wrecks. Romeo made them cannibalistic rotting corpses that could only be stopped by a bullet to the head.

Romeo wasn't the first to show graphic on-screen violence (HG Lewis had gone much further in his infamous gore movie Blood Feast back in 1963) but he did make it authentically real.

Night's subtext about race means it remains as relevant today as it was in 1968.

3. The Exorcist: People queued around the block to watch this film which became the first Hollywood horror blockbuster.

Dick Smith's make-up and Mercedes McCambridge (who provided the voice of the demon inhabiting Linda Blair) are the stars of the show.

Immitators like The Omen mined a rich vein at the box office but only The Exorcist retains its power to shock.

2. Texas Chain Saw Massacre: Made on a tiny budget by a bunch of youngsters fresh out of film collage, Chain Saw's gruelling filming conditions have given the film a sweaty, gritty authenticity that has never been bettered.

Banned in Britain for decades (and one of the first video nasties) Chain Saw is surprisingly light on blood letting but the savagery of its protagonist (Leatherface) is so frightening that audiences are convinced they are seeing more than is on the screen.

Tobe Hooper did some good work after - Salem's Lot, Toolbox Murders - but nothing like this.

1. Saw: The sequels may have degenerated into blood-soaked dross but the original Saw is a true shocker.

Violent, well-acted and well-plotted, Saw is the best horror of the 2000s.

The film twist will leave you slack-jawed.

Honorable mentions: London After Midnight: Lon Chaney's turn as a vampire was his masterpiece. Chaney did his own make-up. He used sharpened teeth and wires to pull his skin back from his eyes so they bulged from his skull. The original print was destroyed in a fire in the 1960s and all attempts to find another has come up empty.

The Wolf-Man: Lon Chaney Jnr followed his dad into horror. His werewolf make-up (courtesy of Universal maestro Jack Pierce) is iconic and the film packs a few chills but has lost its ability to shock.

Reanimator: Shocks and laughs, plus non-stop action, make this a perfect Halloween night treat. The poster sums it up: "Herbert West has a good head on his shoulders... and one on his desk."

Theatre of Blood: Vincent Price at his very best. So many memorable scenes and a great cast. The highlight? When pooor old Arthur Lowe has his head sawn off in his sleep.

An American Werewolf in London: Rick Baker's transformation effects may have aged but the film remains a classic of the genre. Great fun and some genuine scares.

Left field TV choices: Beasts - Nigel (Quatermass) Kneale's horror anthology gave a generation sleepless nights in the 1970s. The best episode? During Barty's Party when a couple are besieged by a pack of frighteningly intelligent rats.

And our most frightening movie of all?

Threads: The BBC docu-drama about a nuclear strike on Sheffield is guaranteed to give you nightmares.

Why is it so frightening? Because it could really happen.

Dele Ayenugba: they didn't believe in African goalkeepers in Europe, but now a Senegalese is playing in Chelsea, and a Cameroonian is playing in Ajax
Bavaria has watched the midfielder, Inter Aguma. He was included in the list of the best born in 2002
Davies can play in the match Bayern-Lokomotiv, Kimmich-at the beginning of the new year
Barcelona can sign Atalanta midfielder de Ron for free
Hyslop on the racism of Newcastle fans: from 50 yards they insulted me, from 50 feet they sang my name
Hertha celebrated the victory with empty stands: they applauded, talked, Guendouzi even threw a t-shirt
Tuchel does not intend to renew his contract with PSG. He will become a free agent in the summer
Source https://www.thetelegraphandargus.co.uk/news/18822699.terrifying-move-time---shot-right-yorkshire/?ref=rss

Cold conditions forecast for the weekend

Ghana heads to polls next week as democracy tested in region

Joe Biden can’t save the planet from the climate crisis, at least not alone

From Messiah to Jonas Kaufmann: the best classical Christmas albums of 2020

Dawid Malan: I’m proud of being No 1 but it guarantees nothing

The different faces of East Lancashire in seven pictures

The five most viewed properties in Newcastle on Zoopla in November