For the residents of the central neighbourhoods of Gaza City the last nine days have been unusually brutal.

The affluent heart of Gaza’s Palestinian society, in past conflicts areas like Tal al-Hawa and al-Rimal have been less heavily hit by the periodic wars between Israel and Hamas that have shaken the coastal strip since 2008.

All that, however, has changed in the latest round of conflict.

In the apartment blocks and houses from where Gaza’s professionals and businesspeople watched the worst of the bombing in past wars from their windows, the conflict has been brought home in recent days.

Over the weekend, Israeli strikes hit at the heart of al-Rimal, killing 42 people alone in Wehda Street, the thoroughfare that runs from close to the Shifa hospital and cuts through the heart of the district.

Another controversial strike, brought down the Jalaa Tower, home to the offices of Associated Press and Al Jazeera.

On Tuesday morning an Israeli military spokesman Hidai Zilberman said al-Rimal district would be the focus of strikes again and would continue to be attacked throughout the day.

Most of the professionals who live in the more affluent areas have not had to flee to a UN-run shelter. Instead, in the past, they have received relatives from locations further out.

“Al-Rimal is the backbone of Gaza City,” said Taghreed Al-Omari, 38, who lives in a three-story building with her husband’s siblings and their children.

“It’s the most beautiful place in Gaza City. At this time of year it’s usually full of people for the Eid holidays and beyond. But now it is empty, full of rubble and sadness. 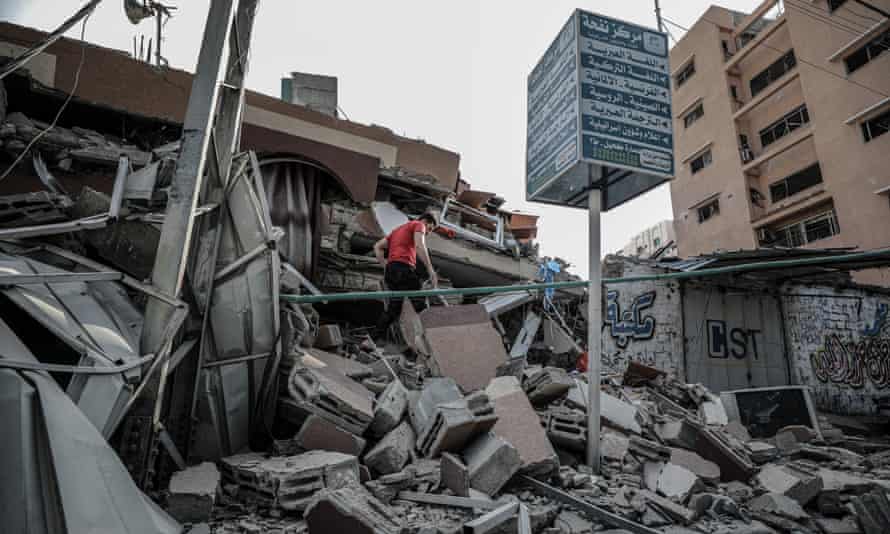 “Now every day there is bombing in our area and there is a building that collapses. Most of the windows of the house are smashed, we replaced it with plastic temporarily and there are cracks in the walls of the house.

“I used to check on my friends in other areas of the Gaza Strip. This war I am receiving calls to check on us. In similar periods of conflict in the past my husband’s relatives would come to our house to escape from their homes in different areas of the Gaza Strip. This time no one came to our house because the bombing is bombing closer to us than them.

“Usually people in the border areas, most of them go to UNRWA [United Nations relief and works agency for Palestine refugees] schools as shelter. We have never gone through that experience. And if our house is targeted, we will go to the house of our relatives or friends.

Far removed from the narrow lanes of the crowded refugee camps like neighbouring al-Shati, where Hamas was born, those who live in these areas are the minority able to afford to socialise and dine at the Gaza Strip’s restaurants and hotels, buy solar panels when electricity is in short supply, and survive most easily its economic, security and social vicissitudes.

Made up of Gaza’s university professors, doctors, civil servants and businesspeople, they are a class, sometimes apart and often more secular, that historically has tended towards being more critical of Hamas.

All of which raises the question why areas like al-Rimal have been hit so hard.

While the Israeli Defence Forces have talked about Gaza City as a whole being Hamas’s “nerve centre”, and say they are targeting Hamas assets and senior leaders hidden among the civilian population, including claims of a massive buried tunnel network, some Palestinians in Gaza believe the areas are being attacked precisely because they are more wealthy.

Mkhaimar Abusada, professor of political science at Al-Azhar University in Gaza and a well known analyst, has also noticed the middle class being hit far harder than in previous conflicts.

“It’s clear that there is pressure being exerted on Gaza’s middle class by bombing the al-Rimal area more heavily. Forty two people were killed on Wehda Street, which constitutes about a quarter of those killed during the war.

If it is a tactic to push an influential section of Palestinian society by bringing the war home to them and push Hamas to stop firing rockets, Abusada is not convinced it will necessarily be effective.

“It seems that there is an understanding being suggested in recent days: stop firing rockets towards Tel Aviv in exchange we’ll stop the bombing the towers in Gaza.

“But I don’t think that pressure on Gaza’s middle class will push people to demand Hamas to stop firing rockets.

“Because there is no real economy in Gaza in the actual sense. Gaza is not Beirut, it is not Cairo, and it is not Amman. The Arab countries have something to lose, while Gaza has nothing to lose.”

For Muhammad Al-Mashlakhoun, 42, a father of four works who for a non-governmental organisation and lives in an apartment on the fifth floor of a 10 storey residential building in the middle of al-Rimal, the last week and a half have been harrowing.

“This war seems more cruel here than other previous wars,” he told the Guardian, describing his experience of the current fighting.

“I’ve lived in Gaza all my life. Previous wars [in 2008, 2012 and 2014] were fought much more in the border areas, but this time I don’t know why, there have been deliberate strikes in the centre of Gaza City.

“There is bombing in many areas in the Gaza Strip, but these areas haven’t seen what has happened in al-Rimal and the centre of Gaza City this time.

“Many buildings neighbouring ours were hit. Government headquarters and towers were bombed, including Shorooq Tower, which is 100 metres away from my home, as well as the Jalaa Tower, where AJ [Al Jazeera] and the Associated Press are located.

“And there was the Al-Jawhara tower, which is less than 500 metres from my house.

“What should I do? I don’t know. Should I go to areas farther from the Gaza City centre? There is no safe place in the entire Gaza Strip.”