WHETHER it's a night of luxury in a jaw-dropping skyscraper or a blissful few days in a country retreat, the Beckhams are spoilt for choice when it comes to their impressive property portfolio.

And The Sun has now revealed the couple's latest purchase is a £20million apartment in the “most luxurious” Miami skyscraper in the area, complete with its own helipad, pool and gym.

David, 44, splashed out on the 10,000 sq ft, five-bed property in the One Thousand Museum high-rise after taking ownership of the new Inter Miami Football Club.

But it's far from his only swanky residence - and the former footballer has owned some seriously incredible apartments, villas and family homes right around the world over the last few years.

Here's a look at the Beckham property empire - both past and present...

Beckham's latest purchase is his eye-popping Miami apartment in the One Thousand Museum high-rise.

The luxury block, which is 700ft tall, was designed by the late British-Iraqi architect Zaha Hadid, who was behind the 2012 Olympics Aquatic Centre in Stratford, East London.

It features huge free-standing baths, a pristine and huge kitchen, car parking, a pool and gym, a spa and even a helipad.

And there's an incredibly modern concierge desk to ensure the family have the most upmarket welcome possible to their new home too.

The building has “townhouse-style properties at levels 10 to 14 and half-floor apartments from storeys 15 to 49, to full-level penthouses on the next eight levels and a duplex penthouse across floors 58 and 59”. Prices start at £5million and go up to £45million.

When the Beckhams are in the UK, they reside in a swanky seven-bedroom London house in Holland Park that they bought for a cool £31.5million in 2013.

And no expense has been spared when it’s come to decorating and furnishing the luxury home.

It perfectly accommodates Victoria’s flair for fashion, as it contains two dressing rooms and a catwalk-style runway.

Other quirky features include a playroom, gym, spa area and salon-style room.

David and Victoria have spent an estimated £8million changing the house, and enlisted the skills of interior designer Kelly Hoppen, before replacing her with Rose Uniacke, dubbed 'the Queen of Serene'.

Ever the perfectionists, it took nearly three years for the home to be completed and the family finally settled in over summer 2016.

The front of the house is typical of the area and features a wrought-iron canopy at the entrance with black and white tiles.

On entering the house, the family appear to have stayed true to the property's early Victorian period, with the hallway featuring wall-mounted lighting, antique mirrors and chandeliers on the landing.

Spread over three floors, all the couple's four children Brooklyn, Romeo, Cruz and Harper, have their own bedroom and a small sitting room.

The family bought their stunning Cotswolds retreat - a Grade II-listed farmhouse that was converted into the sprawling mansion-like building they're currently isolating in amid the coronavirus outbreak - in December 2016 for a reported £6.15million.

And with chandeliers and an enormous roaring fireplace, the Cotswolds bolt-hole is a step above the self-isolating experience most of us are enduring, with the famous family having plenty of space to roam around in.

The garden also features a plunge pool that sits outside their country barn conversion, and on the far side of the kitchen the sprawling eating area leads to the living room where the family have thrown some of their famous parties, including their now-traditional New Year's Eve fireworks bash.

And there is lots of opportunity to exercise too, with David and Victoria's son Romeo, 17,  seen showing off his impressive football skills on a treadmill so big you can pass a ball around on it.

The property also boasts a tennis court where the family can knock a ball around if they fancy.

While they're often seen in their UK and US properties, David and Victoria Beckham have also previously bought two stunning homes in Dubai - one of which is in the famous Burj Khalifa.

David splashed out on the property in the world's tallest tower in 2009, and is still thought to own it now.

The couple have kept glimpses of their apartment fairly under wraps, however, and rarely share photos from inside on social media - unlike their other properties.

According to Times of India, the family bought the apartment for around $5million (£4million).

The Burj Khalifa is a huge tourist hotspot in Dubai, with people from all over the world flocking to its observation decks for uninterrupted views over the entire city.

It seems one Dubai property isn't enough, as David Beckham also previously splashed out on a lavish Palm Jumeirah villa too.

And while the football ace is reported to have bought it for £1.3million in 2002, Now magazine claims its value rose to around £8million by 2008.

However, it was previously reported he gifted the property to Victoria's parents Tony and Jackie that same year.

"David realised he was not going to be able to spend any time in Dubai," a source previously told the News of the World.

"He's got his commitments in Los Angeles and it's a long trip, especially when he still has to spend a lot of time in London - so he discussed it with Victoria and decided that the Dubai place would be a really special present for her parents."

While the Beckhams are still thought to own many of these properties - as well as Victoria's clothing stores and co-owning the new Inter-Miami stadium - they've sold a fair few off too:

The Beckhams put their luxury South of France retreat on the market in 2016 after reportedly only visiting it on a few occasions.

Former Spice Girl Victoria splurged £1.5million on the 19th century home, near the Cote d-Azur, in 2003 after falling in love with its rustic charm.

The six bed property in the French village of Bargemon - which was dubbed Beckingham Palace-sur-Mer - eventually hit the market, however, after Victoria is claimed to have spent millions on renovations.

It's unclear when, or even if, they managed to sell it.

A source previously told The Sun: “The Beckhams might have poured millions into the mansion, but they didn’t seem too keen to enjoy the results of their cash."

The ground floor boasts a state of the art kitchen and breakfast room, plush purple sitting room and a formal dining room with an open fireplace, while the first floor, which is accessed by two staircases, has a guest suite with private terrace, three lavish double bedrooms and a family bathroom.

And the second floor has a master bedroom - complete with chandelier - as well as a suite with a terrace that leads to the lush gardens and an infinity pool.

The family didn't just branch out once in Europe, as they also enjoyed a few years living in a beautiful Spanish villa too.

Beckham moved out there in 2003 to play for Real Madrid following his exit from Manchester United.

After renting when the family first arrived in Spain, David eventually bought a stunning villa in 2005 - but it wasn't to last, as he then hit LA just a few short years after.

After listing the property and keeping it on the market for around eight years, the Beckhams finally sold their stunning Madrid home in 2015 for £4.2million, making a profit of £1million from when they first bought it.

As he built up his career at Manchester United, he wooed his first girlfriend Krista Kemp at the property.

After falling head over heels for Spice Girl Victoria Adams in 1997, the pair resided together at the location too, before he eventually sold up in 1999 for a £40,000 profit.

After moving from Manchester, Posh and Becks snapped up a historic penthouse in Alderley Edge, Cheshire, in around 1998.

In an iconic photoshoot with OK! Magazine, the pair proudly posed in their new property, as Victoria boasted she designed the entire interior herself. They eventually sold it in 2002 for a £283,000 profit.

Following Victoria’s pregnancy with Romeo, the celeb couple moved to a converted barn in Alderley Edge, Cheshire, in 2002.

The characterful five-bedroom house had its own gym and indoor pool, but the celebrity couple only stayed there for two years before they sold it for £1.75million - making a profit of £500,000.

For almost two decades, Posh and Becks also owned a second property in Hertfordshire, which was coined ‘Beckingham Palace’ by the press.

The stunning seven-bedroom house is nestled on 24 acres of land and contains some unique features.

From marble flowers, to velvet curtains and a medieval-style maze, the Beckhams certainly didn’t scrimp on renovations.

They eventually sold their famous palace for £11.35million in 2015, making a profit of £9million. 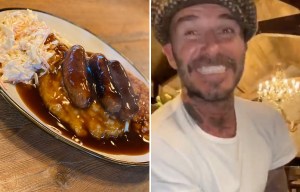 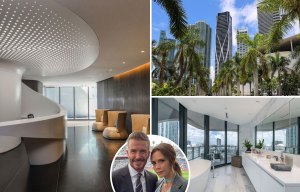 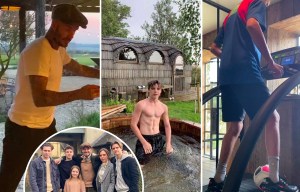 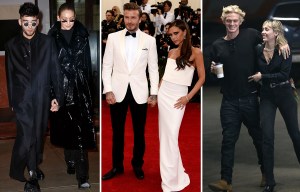 Twinning celebs who prove that couples who dress together, stay together 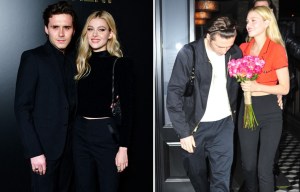 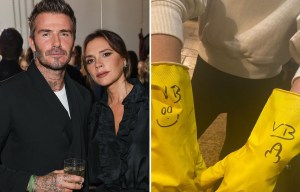 Following Becks’ signing at LA Galaxy, the family decided to purchase a six-bedroom house in Los Angeles in 2007.

With the help of close pal and interior designer Kelly Hoppen, the pair furnished the home to perfection.

However, they eventually sold it in 2018 for £25million, making an impressive profit of £13million.

Jerome Boateng: Children are not born racists. It is important to teach them that racism is unacceptable
Tottenham believes that it may not receive 200 million pounds by June 2021. The club took out a loan of $ 175 million. Tottenham used the state loan system
Manchester City fans will display banners in the city about UEFA-Power, corruption and lies, UEFA-the mafia. Decomposes football since 1954
Raul can lead Schalke
The final of the Hungarian Cup showed what will happen if you now launch fans into the stands
Higuain injured a thigh muscle in training
💛Borussia Dortmund players got down on one knee, forming a heart: For a tolerant world!
Source https://www.thesun.co.uk/tvandshowbiz/11296193/beckhams-property-portfolio-homes-skyscraper-apartments-miami-london/