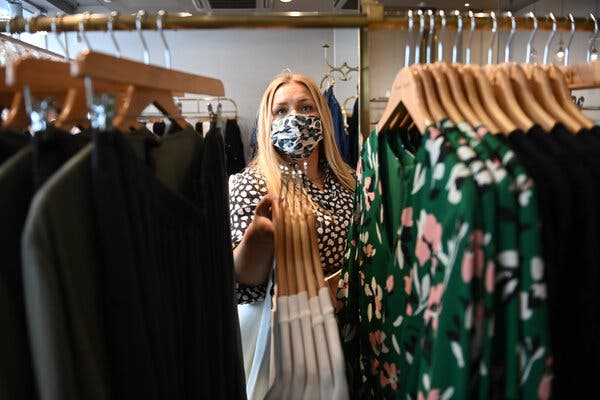 A worker preparing a display of clothes in a shop in London. Prices rose 0.6 percent in May from the previous month, driven by increases in clothing and other areas.Credit...Neil Hall/EPA, via Shutterstock

Inflation in Britain accelerated at its fastest pace in nearly two years last month, as businesses reopened and social distancing restrictions were relaxed. Consumer prices rose 2.1 percent in May compared with last year, the national statistics agency said on Wednesday.

It is the first time the annual inflation rate has climbed above the Bank of England’s 2 percent target since July 2019. In April, the rate was 1.5 percent.

Prices rose 0.6 percent in May from the previous month, driven by increases in clothing, transport, restaurants and hotels, and recreational expenses like computer game downloads.

Across Europe and the United States, policymakers and investors are watching inflation closely for signs of whether the current upward pressure on prices is temporary or here to stay. Some of the jump in annual inflation rates can be explained by the fact that prices were so low a year ago, when economies shut down in response to the pandemic.

But the reopening is also causing prices to jump as businesses try to keep up with a sudden increase in demand. If inflation remains high and keeps rising faster than expected, it could be a sign the economy is overheating and central banks would be forced to pull back on monetary stimulus. On Wednesday, the Federal Reserve will make its next policy announcement amid rising inflation expectations in the United States.

“The firming of price pressures in the U.K. is part of a global phenomenon as the world emerges from the Covid-19 pandemic,” Ambrose Crofton, a strategist at JPMorgan Asset Management, wrote in a note. “As a result, central banks are gradually tiptoeing towards the exit of their emergency monetary support programs.”

The Bank of England expects inflation to rise to about 2.5 percent by the end of this year before drifting lower. Its next policy meeting is on June 24.

Holland about 175 million euros for him: I hope this is a rumor. Very big money for one player. I like Borussia
Bayer moved the training to the premises due to an explosion at a chemical plant in Leverkusen
Tottenham sold Alderweireld to Qatar's Al-Duhail. The deal is estimated at 13 million pounds
The sale of Varane is part of Real Madrid's plan to sign Mbappe. The club does not buy players to save money on the PSG forward
Manchester United are ready to sell Lingard, Telles, Jones, Dalot, James, Williams and Pereira. The departure of Martial is possible
Barcelona supported Morib after insults in social networks: We love football and fight against racism
There were photos of the blue away uniform of Real Madrid with orange inserts and a graffiti pattern

Pumphouse could be transformed into holiday lets and lodges

Dear Fiona: How do we support our son and daughter-in-law after our grandchild’s cot death?

FirstGroup boss to quit amid tussle with activist investor

Indian teen whose body was found hanging off bridge was killed by her family for wearing jeans, says report

The best Nintendo Switch deals you can get in August 2021

Island allotment inundated with demand as interest booms after lockdown

Cops search for missing OAP, 83, after she vanishes from village home as man in his 40s arrested on suspicion of murder

Island allotment inundated with demand as interest booms to Covid

The big gigs happening in Cardiff this summer

Banks need to do more to protect our security in digital age, says new research

Kids moan they have ‘nothing to do’ just 5 days into the summer hols despite parents spending £1.3k

Start now to get another growing season out of your garden

Demand for defibrillators on the rise after high-profile incidents

17-year-old Stockton cyclist injured after being hit by car

FIFA 22 Beta code sign up, likely release date and how to get a code

Police warning after idiots fed bacon sandwich to a horse