Michael Mohammed Ahmad won’t apologise for his reality, even if writing about it truthfully makes people feel uncomfortable. It was “confronting stuff”, he says, of the cameras and barbed wire fences that were permanent fixtures of his education at Punchbowl Boys High School; of growing up as a Muslim in the era of the Skaf gang rapes, 9/11, the Cronulla riots; of seeing schoolmates get stabbed.

His New South Wales Premier’s Literary Award-winning novel, The Lebs, which was also shortlisted for the Miles Franklin, tapped into so many of those experiences. But it is his frustrations with late cartoonist Bill Leak’s caricatures of the fatherhood of “men of colour” – depictions that Ahmad says are racist and deeply offensive – that underpinned his desire to write a more tender and loving Arab and Muslim masculinity in his new novel, The Other Half of You.

“I feel like Arab fathers and Muslim fathers, and more broadly, Indigenous fathers and fathers of colour – are always dehumanised, constructed [as not loving] our children in the same capacity as white men love their children,” Ahmad says.

He believes such portrayals are part of a “strong conflation in western culture between patriarchy and masculinity”, in which Arab men who happen to have masculine traits – Ahmad describes them as “big, dark, hairy and extroverted” with loud voices – are immediately seen as patriarchal.

“Most men of colour can’t escape being masculine,” he says, arguing that the way men of colour often look and speak aligns with masculine cues and stereotypes. “[Academic and activist] bell hooks argues that we need to be able to honour and revere that which is masculine and beautiful separate from patriarchy.”

I do want to talk honestly about problematic fathers. I don’t want to romanticise them, but ... to show their humanity

Ahmad’s latest autofiction novel – the third instalment in the life of main character Bani Adam, following on from The Lebs and Ahmad’s first novel, The Tribe – explores a young Muslim boy’s complex negotiation of faith, family and tradition when it comes to romance. In it, a young, naive and zealous love between a Christian girl and Muslim boy is brought to a premature end by the wagging tongues of Bani’s community and his father’s accusation that he had “brought shame on the House of Adam”.

Ahmad balances his protagonist’s quest for the kind of love he’d studied in literature’s great classics with his respect and reverence for his father, the safeguard of his heritage and identity. “I feared my dad … not like I feared barking dogs and child molesters, but like I feared the sun, which gave me life, and could just as easily incinerate me,” Bani reflects at one point, of a masculinity that manifests itself both symbolically and physically in his life.

The Other Half of You is written with Ahmad’s trademark honesty and grit, but the affection for his characters, despite their very clear shortcomings, is obvious.

“My job as a writer is not to tell a positive story, my job is to tell an honest and complex story,” he says. “On the one hand I do feel a strong responsibility to look after my community, to represent their diversity, to show their strengths. But I don’t shy away from their weaknesses and flaws, because there are flaws. And there are elements in our community that we have to improve.”

He lists the bad fathers in the book, which include multiple perpetrators of domestic abuse, physical and emotional. 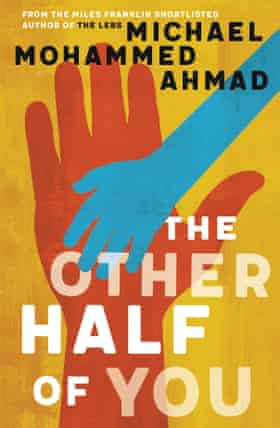 He’s adamant that it’s not his role to speak for Arab-Australian women. But, he says: “I do want to talk honestly about problematic fathers. I don’t want to romanticise them, but what I try to do is counterbalance that, to show their humanity … to show moments where they show the capacity to grow, to change.”

Bani’s father is one such character. Ahmad wanted to explore his capacity to love his children, and to choose them time and time again, despite the “horrible world he came from and what he had to overcome”.

Ahmad speaks fondly of his own father, a once-illiterate man who now travels to Ahmad’s western Sydney home once a week to teach Ahmad’s “mixed-race” son Kahlil how to read and write Arabic.

Ahmad believes that it’s no coincidence that there’s been such a negative narrative around Arab people, citing scholar Edward Said’s argument that the reason why university literature courses omit the Arab canon, despite it being thousands of years old, is because it humanises them.

“Said argued that if you’re going to invade, and take these people’s land and wipe them out, you can’t show any humanising details about them. And because the Arab canon is so poetic, so romantic, so chivalrous, you might actually feel compassion for these people,” he says.

“We don’t actually have a terrorist narrative; we have a very romantic, very spiritual, and loving narrative. And for me, in the spirit of what Edward Said was saying, this book tries to give that picture in the hope that it does influence the way that Australians see us.”

Ahmad sees literacy and education as instrumental in breaking cycles of patriarchy and violence, and founded Sweatshop: Western Sydney Literacy Movement to empower young people of culturally and linguistically diverse backgrounds through reading, writing and critical thinking, and mentor them to write their own stories.

“I wrote this book to create a humanising and beautiful portrait of the love and connection of an Arab and Muslim father and son,” he says. “And I don’t want it to just be a representation of my love for my son, but a representation of our love, of the love of men of colour for their sons and for their daughters, and also the love and respect we feel for the women in our lives who bring our children into this world.”