During Nicola Sturgeon's daily coronavirus briefing, she was asked why theatres and concert halls are better off in England than Scotland. Ms Sturgeon looked visibly rattled as she told the press conference "I am the First Minister of Scotland" twice in response to the question.

Ms Sturgeon was asked: "Why are theatres and concert halls better off in England instead of Scotland when it comes to restrictions?"

The SNP leader replied: "I am the First Minister of Scotland and I have to decisions that I think are right for Scotland.

"That is my job, that is my duty, I am not in possession of all the facts and figures to the same extent that I am in Scotland about the situation in England. 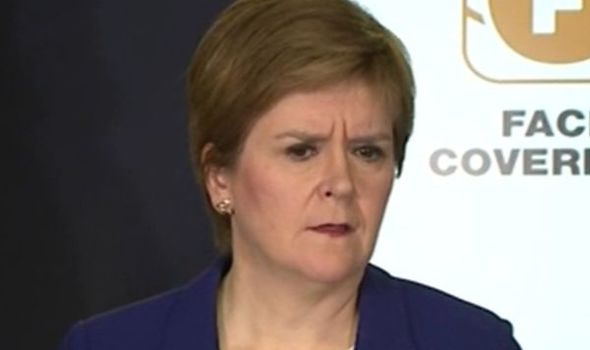 Nicola Sturgeon has been Scotland's First Minister for over half a decade (Image: BBC)

"England has its own Government to take those decisions.

"I am the First Minister of Scotland."

Nicola Sturgeon's SNP won the May 2021 Holyrood election but fell one seat short of an overall majority.

The SNP leader has admitted she will push for a second Scottish independence referendum during the first half of the SNP's fourth consecutive term in Government.

IndyRef2: Campbell asks Blackford ‘do you have the time?’

On Monday,- Alastair Campbell highlighted SNP game-play on Scottish independence during the crucial Scottish Parliamentary election in a heated exchange with Ian Blackford.

Alastair Campbell questioned whether Nicola Sturgeon's party had used the Holyrood election as a mandate for independence despite the Scottish Government's support possibly coming as a result of their leadership in Scotland during the coronavirus pandemic.

The former Labour spin-doctor highlighted the SNP played down independence in the run-up to the election whilst support for breaking up from the UK remained close to 50 percent.

The Conservative Party, Welsh Labour Party, and the SNP all won their respective May elections, highlighting the public backing for the current Governments across the UK.

Mr Campbell said regarding Scottish independence: "Do you have the time to get that all done?

"It is a massive thing, you know this from the first time, there were massive unanswered questions about the currency, the border, the future of the military.

"These are huge questions, are you really saying you have time to come through the pandemic, have the referendum and get Scotland ready for independence?

"By the way, I do think you did play independence down in this campaign."