“I knew of it from pictures I’d seen online and I thought it looked pretty, but when you arrive and see it yourself, it’s like, ‘Oh wow, this is insane,’” says actor Guido Garcia Lueches about the Minack Theatre. “It’s probably the best theatre I’ve ever performed in.”

Carved largely by hand into a craggy, granite cliff-face, the dizzying outdoor venue on the south coast of Cornwall looks magnificent in the summer sunshine. Tiers of subtropical foliage splash colour throughout the landscape and weathered concrete seats bearing the titles of past shows rise abruptly from the stage. The ocean, 100ft below, looks an enticing shade of green.

“When you’re on stage, there’s a wall of people in front of you – it feels like the audience goes on into the sky,” Garcia Lueches adds. “I wouldn’t say it’s daunting as an actor, but it makes you want to live up to it. Sometimes you get distracted when you look around at the sea while you’re changing backstage. Then you’re like, ‘No, shit, I have a scene to do, run, run’!” 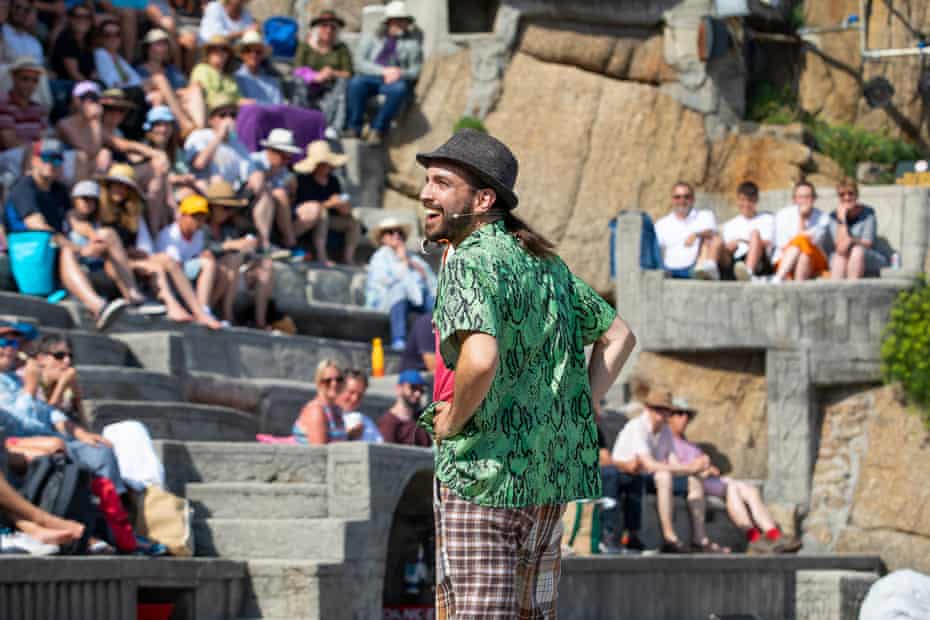 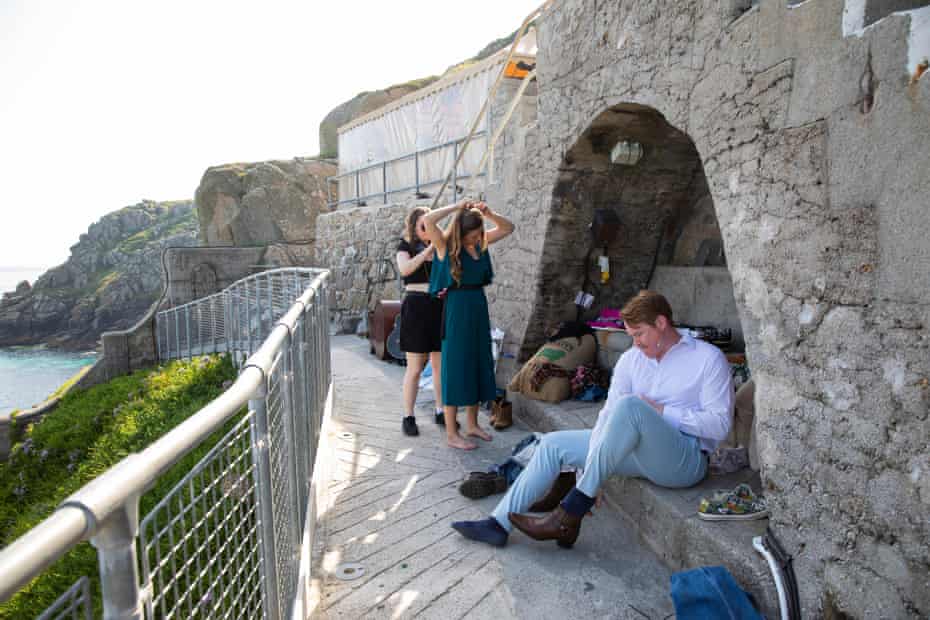 Actors change backstage, with a view of the sea below 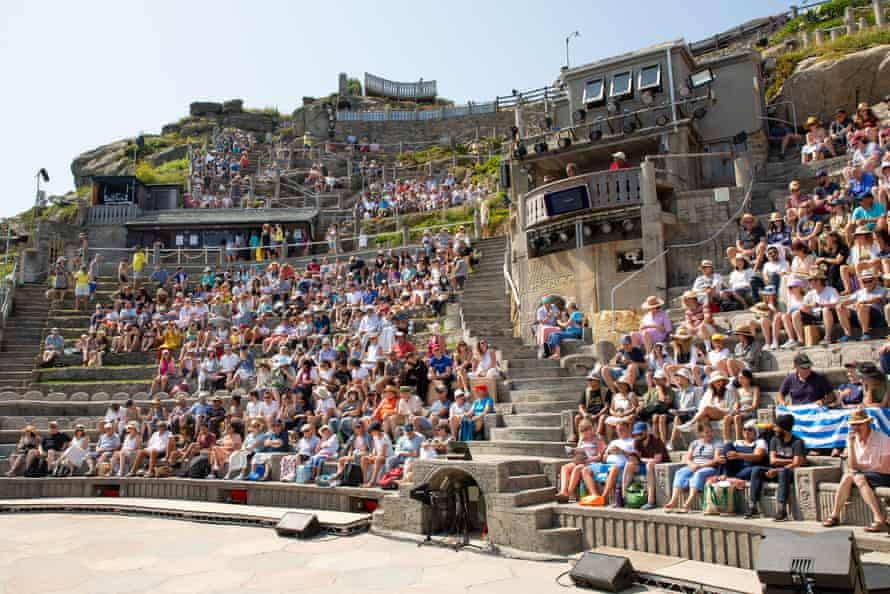 Visitors take their seats ahead of a performance

A view from one of the private balconies

Created by Rowena Wade in the early 1930s, the Minack is a towering feat of landscaping. The basic stage and surrounding terraces were shaped within six months, though Wade would spend the rest of her life continuously improving and redesigning the site. An exhibition room at the top of the cliff pays homage to her work.

“She was extraordinarily out of her time and fiercely independent,” says Zoe Curnow, executive director at the Minack. “Originally, she just wanted to create a performance space for The Tempest in 1932 in what was essentially her garden.

“The astonishing thing is how much work she did in those first few winters, but even into her late 70s she was still changing things. Right after a show, she would talk about getting the boys in from the mines to use dynamite to blow bits up. I don’t think she ever sat back and thought, ‘I’ve finished it.’ 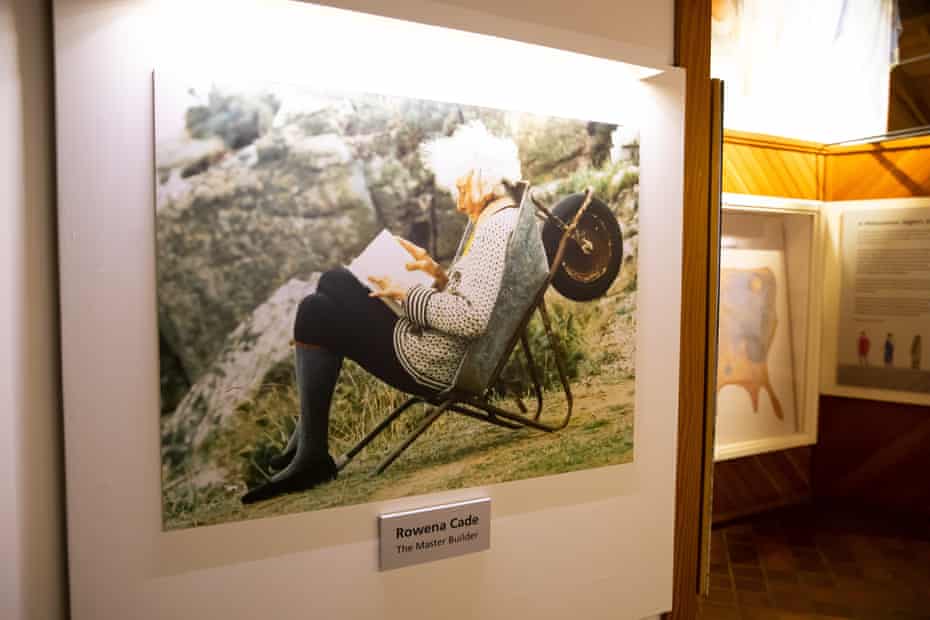 An image of Rowena Cade sitting in a wheelbarrow, part of the on-site exhibition 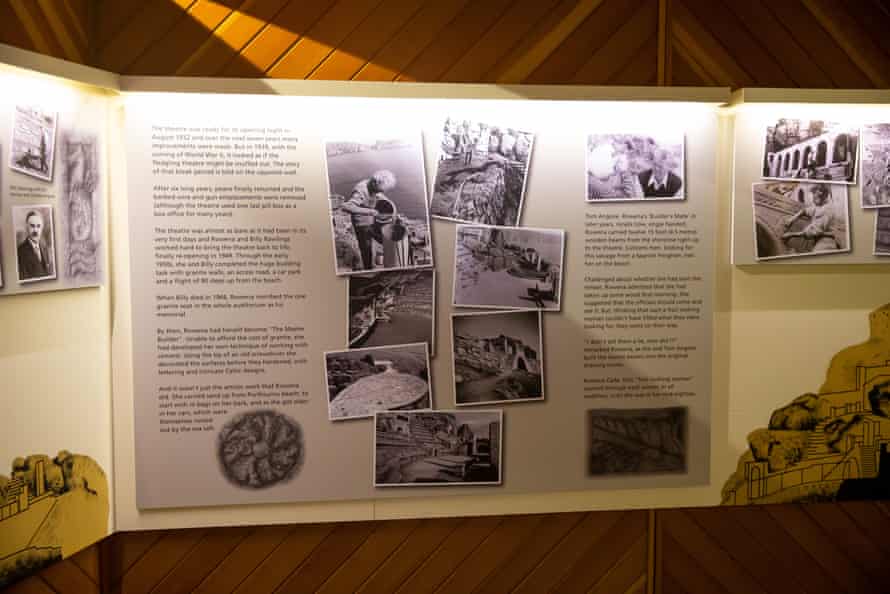 One of Minack’s groundskeepers, Claire Batten, describes the cliff garden as “paradise”. Batten clambers gamely from terrace to terrace, secateurs in hand, explaining how each small patch has a microclimate within a microclimate – “a bit like Russian dolls”. The temperature is 25C and the plants are in their element.

“All the plants here are predominantly South African, South American and Mediterranean,” she says. “The soil is poor but acid-rich and free-draining, plus we get high UV, low pollution and lots of reflection off the sea. So it’s the perfect storm for plants from those regions.

“My favourite plant at this moment is the red crassula coccinea, which is a vibrant succulent. We introduced a lot more colour during lockdown and people seem to be loving it.” 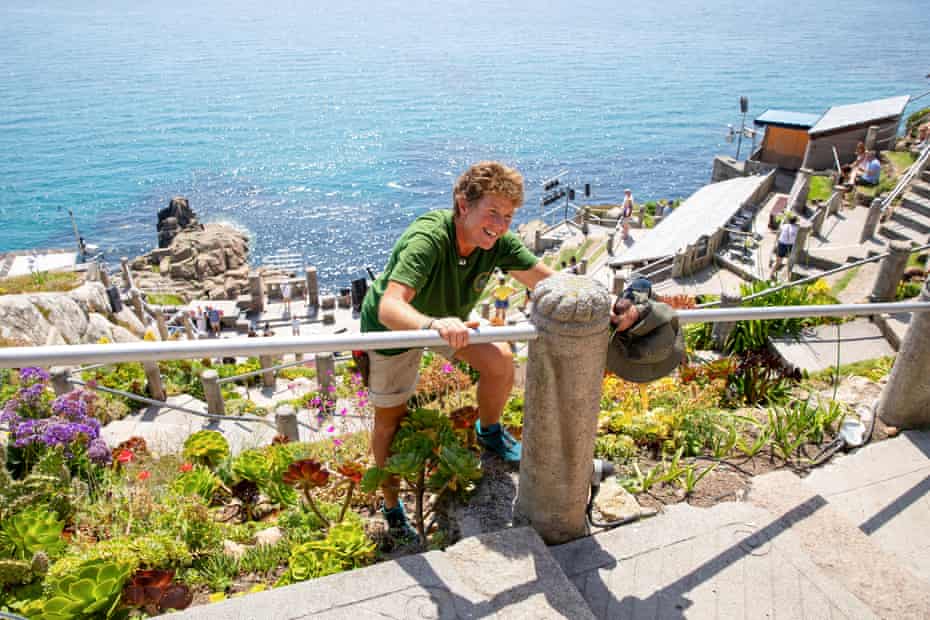 Claire Batten, one of the grounds team, climbs up to the pathway after tending to some of the plants

Backstage at the Minack, actors and musicians performing in The Winter’s Tale are readying themselves for their next show. Their warm-up routine includes a sequence of tongue twisters and mouth exercises followed by a rendition of Sweet Child O’ Mine “so that we’re all starting on a high”, says actor Lucy Crick. During the interval, she also rehearses a line-dance routine, an amusing feature of the show’s unorthodox second half.

However, Crick warns that you can’t always prepare for what might happen during a live outdoor performance. “I’ve been upstaged by a pod of dolphins here before. But it’s like with all outdoor theatre – you have to be spontaneous. There’s no way 700 people are going to ignore 20 dolphins going by, so you just bring it into the show.” 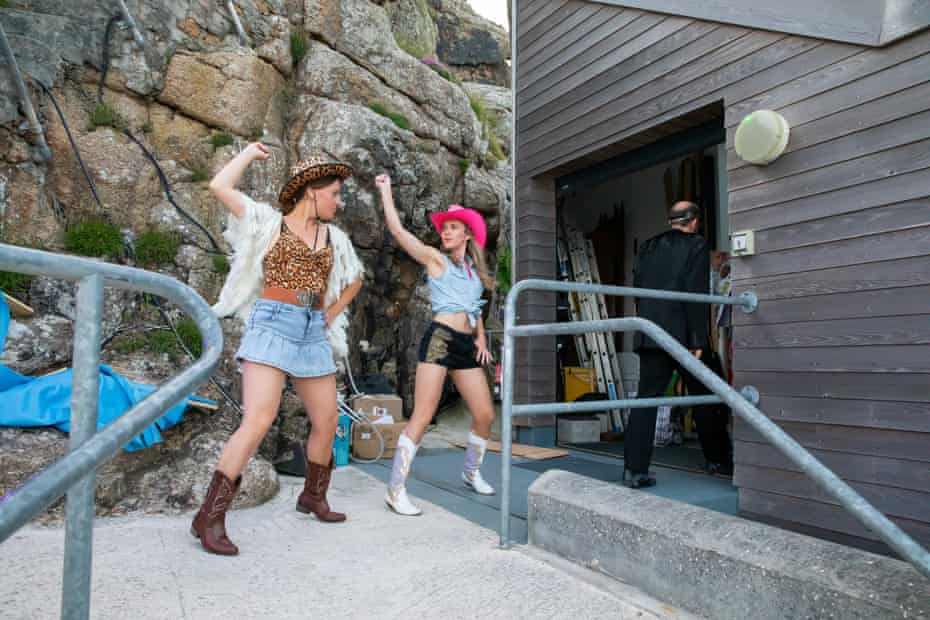 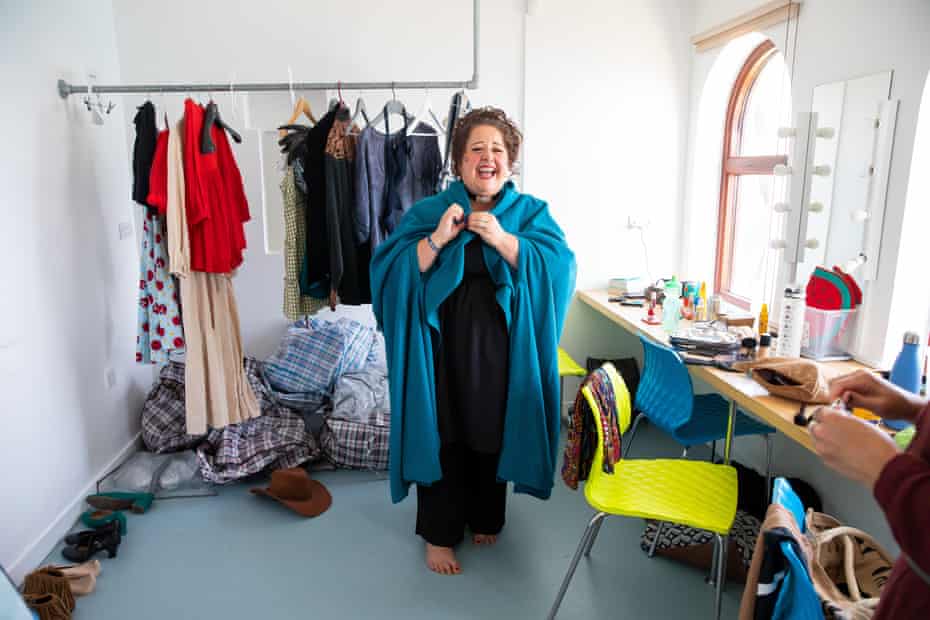 Anna Franklin in the dressing room shortly before curtain call 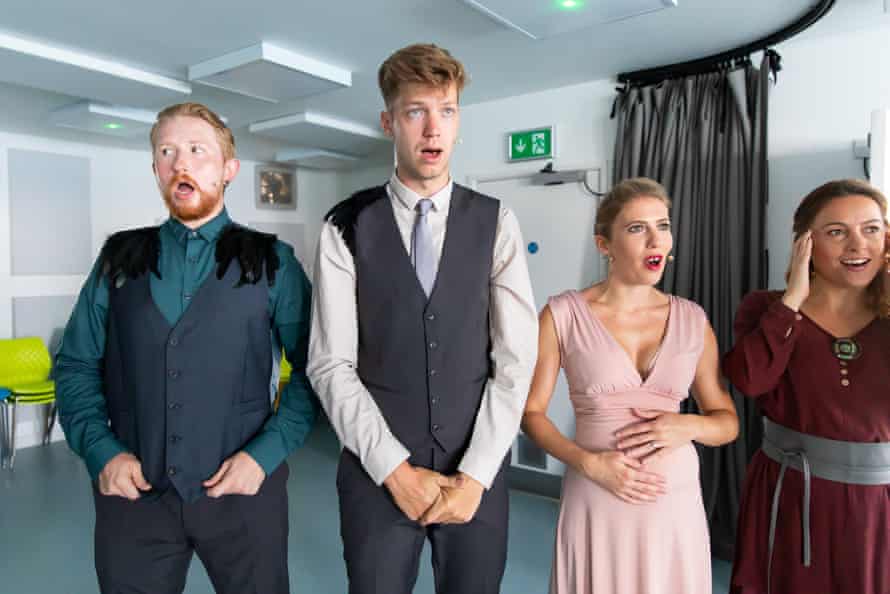 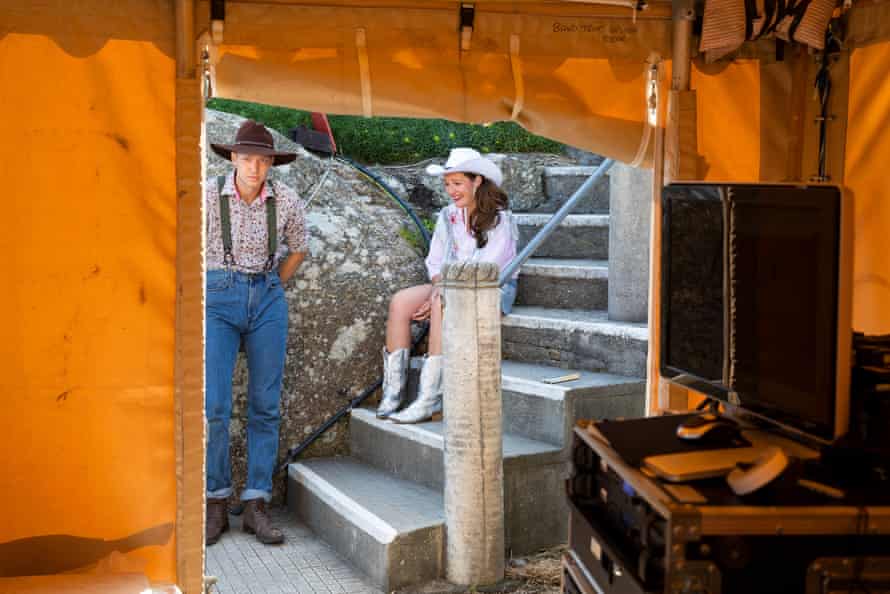 Mark Harandon is a veteran performer at Minack and routinely plays the character of Billy Rawlings, Wade’s gardening assistant, through which he recounts the venue’s rich history. He mimics Rawlings’ unusual Cornish twang but comically avoids using the kinds of expletives for which Rawlings and Cade were both well known.

“Minack is a difficult place to play because it has many peculiarities,” he says. “The stage has a reverse rake which tilts away from the audience and the seating is much more steep than a normal theatre.

“I played here in 1984, before there was any sound reinforcement [microphones and speakers]. In those days, if the sea was big and the wind blowing against you, you really had to project your voice.

“It has a special atmosphere here because it faces out to the ocean and Logan Rock. I always say to people, even if the play is no good, it’s stunning regardless.” 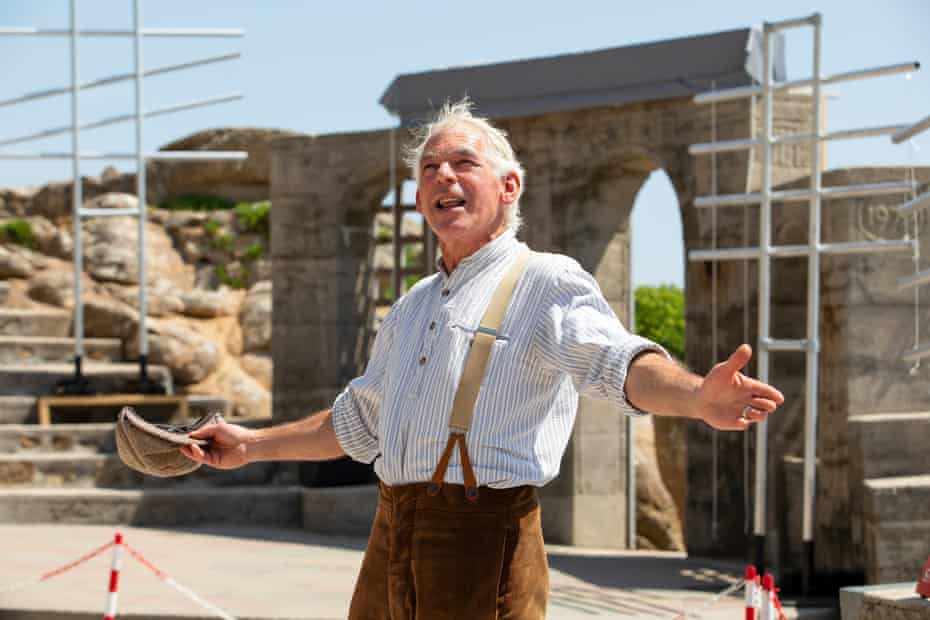 When Covid-19 restrictions were lifted on 19 July, Minack welcomed a full house of spectators for The Winter’s Tale. It marked the end of a miserable year for much of the theatre industry. “To look around and see this gorgeous theatre full was quite moving,” says Helena Gullan, a musician and actor.

“All my contracts last year were completely cancelled and financially it had a massive impact. I’ve been busking and I’ve retrained as a cocktail mixologist, but I always knew I’d come back to the music and theatre industry.

“It’s been lovely to have the appreciation from the audience, acknowledging how hard it’s been for us and what we’ve been through.” 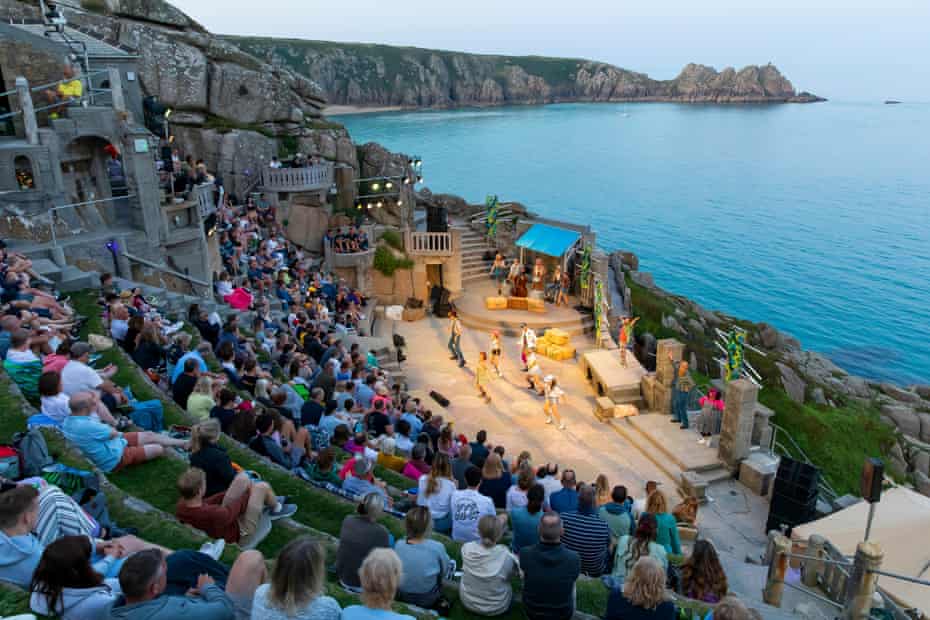 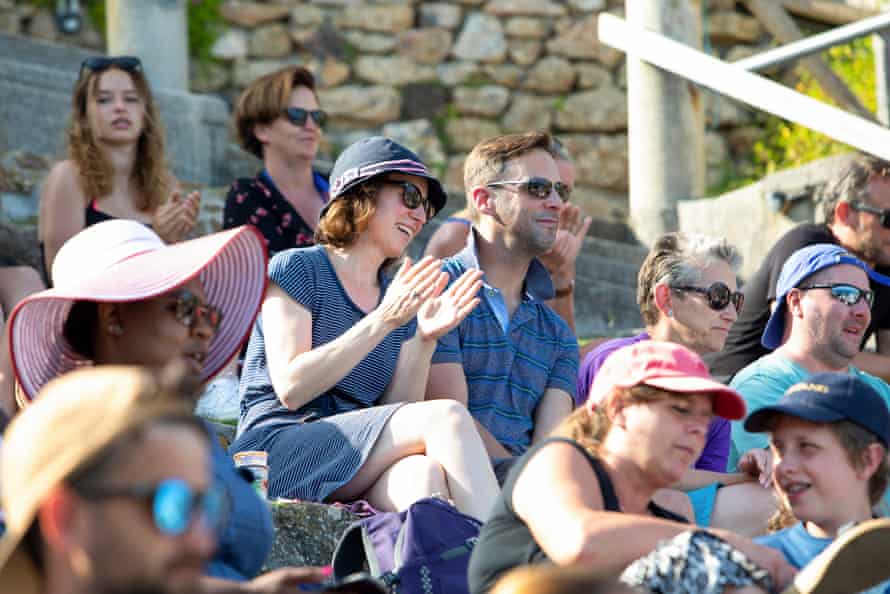 A woman applauds the performers

Sitting under the purple haze of the stage lights at the end of the evening, Adam Nichols is reflecting on the day’s performances. Nichols, co-director of the show, who also played King Leontes, describes The Winter’s Tale as “a beast of a play” due to its distinctive halves.

He and his cast perform it with a twist: the first half follows a traditional, tragic narrative; the second erupts into a wild fusion of dancing, comedy and music, featuring tunes by the likes of Bille Eilish and Whitney Houston.

“I love to see people in the audience watching a Shakespeare play who wouldn’t normally do so,” he says. “With outdoor theatre you get a lot of people who aren’t regular theatregoers, especially here, because it’s a tourist attraction. If you can hook them in with things they recognise – which is exactly what Shakespeare did – that really helps.”

Glancing around at the climb back up to the exit gates, he adds: “It takes quite a long time to come down from the high of a show, so I don’t feel exhausted yet. But I’m not looking forward to those steps!” 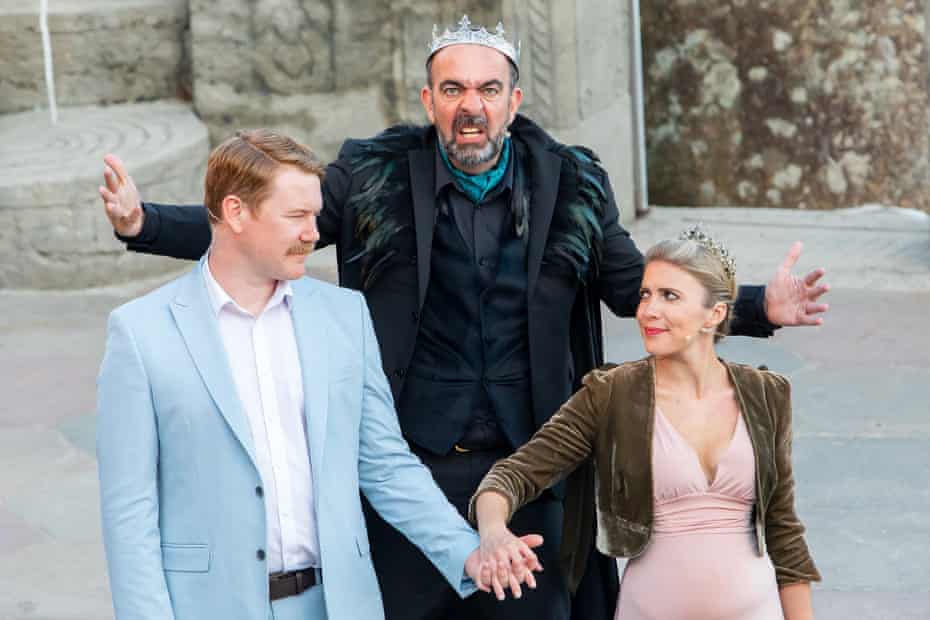 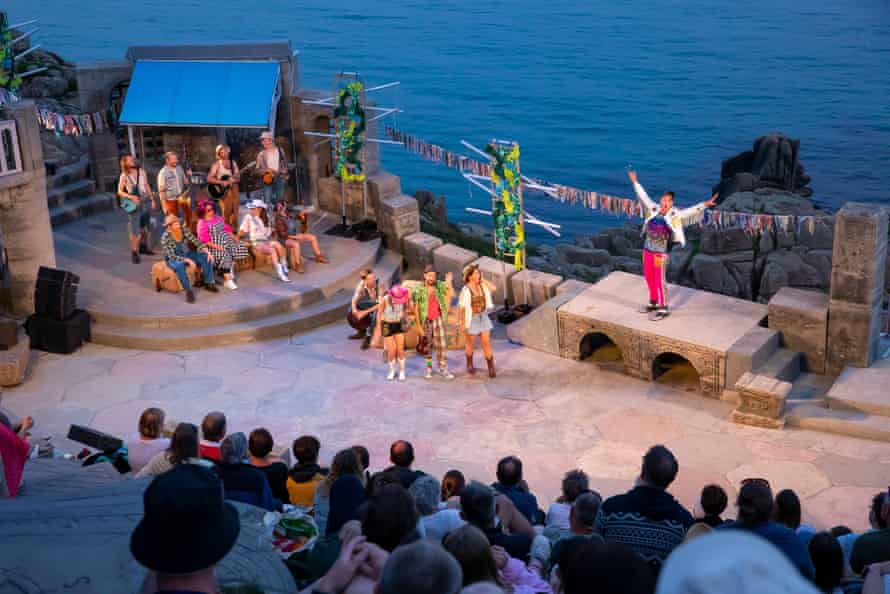 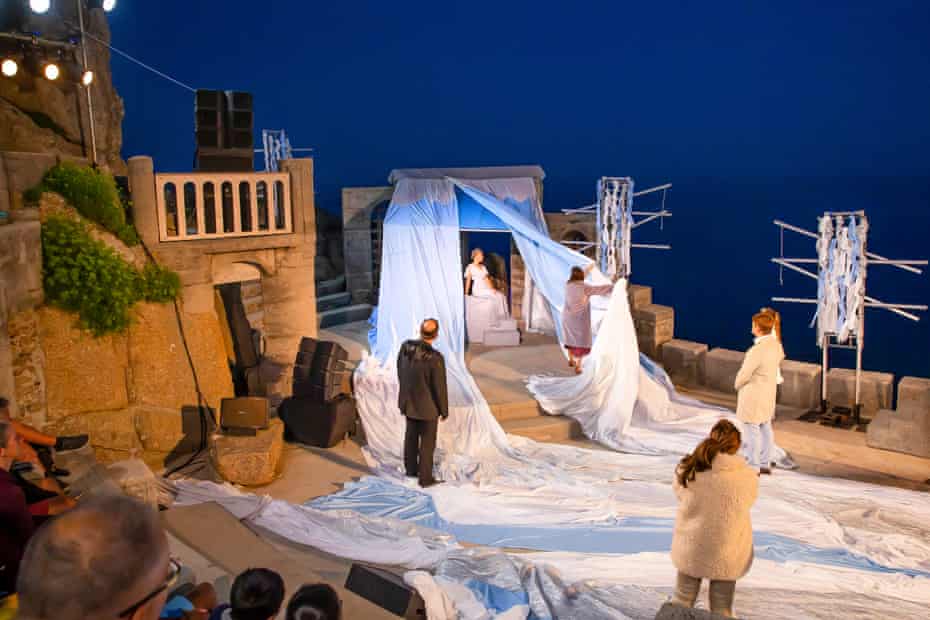 Queen Hermione, depicted as a stone figure who later comes to life 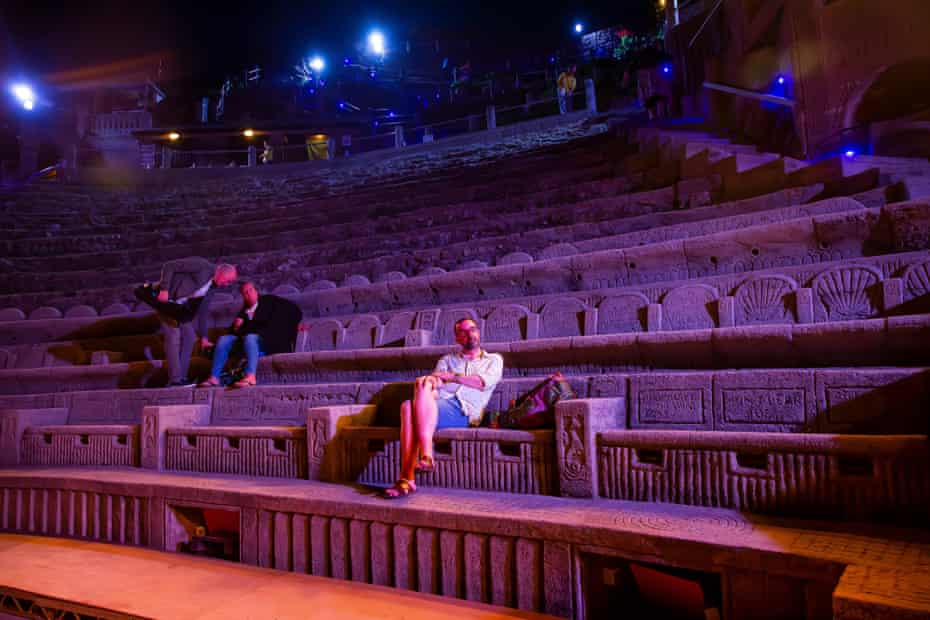 Saka has 20 assists for Arsenal since the start of last season. This is the best result in the club
Alex Ferguson: Ronaldo dreamed of Real Madrid. This is the only club where world-class players appear from year to year
The 60-year-old vice-president of Suriname played for his club in the CONCACAF League and distributed money to rival players. He was suspended from football for 3 years
Luc de Jong scored the first goal for Barca in the 4th game - with Levante
Aston Villa goalkeeper Martinez offered Bruno to concede a penalty to Ronaldo and danced after a miss by the Manchester United midfielder
English football is getting closer to banning bookmakers: the names will be removed from T-shirts, even billboards and TV commercials are questionable
Dybala and Morata will not play with Chelsea. We hope they will return after the matches of the national teams. Allegri about injuries