BIDEN whistleblower Tony Bobulinski is reportedly set to play recordings of Biden family operatives begging him to be silent, on a television segment on Tuesday that Donald Trump Jr claims will be “lit.”

Fox News host Tucker Carlson on Monday afternoon revealed that Bobulinski would be on his show for his first TV appearance since making allegations about his former business partner Hunter Biden.

“Tony Bobulinski says he met with Joe Biden about China. The media have suppressed the story, but it’s real and it matters. Voters have a right to know the details. Bobulinski sits for an extended interview Tuesday night at 8p ET on #FoxNews,” Carlson tweeted.

In a statement on Monday, Fox News said that “Bobulinski will discuss new allegations regarding his relationships with both Hunter and the former Vice President.”

Meanwhile, Sean Davis, a co-founder of the conservative online magazine The Federalist, tweeted that a source with information about the planning said that “Bobulinski will play recordings of Biden family operatives begging him to stay quiet and claiming Bobulinski's revelations will ‘bury’ the reputations of everyone involved in Hunter's overseas deals.”

Bobulinski has claimed that Democratic presidential nominee Joe Biden lied when he stated that he did not discuss overseas business dealings with his son Hunter, and was set to speak about it with the FBI.

The ex-business partner-turned-whistleblower also claimed last week that he provided phones and documents to the Senate Homeland Security Committee and the FBI.

Trump Jr added that he “CANT WAIT FOR THE MEDIA TO NOT COVER THAT AND DESTROY WHATS LITTLE IS LEFT OF THEIR CREDIBILITY FOREVER!!!”

However, no evidence has emerged that Hunter Biden’s business dealings influenced US policy or that there was any criminal wrongdoing by him or his father.

In addition, Senate Republicans who investigated the matter did not uncover any wrongdoing.

The Biden scandal began earlier this month after the New York Post published emails and photographs from a laptop that allegedly belonged to Hunter Biden.

Bobulinski, a retired US Navy lieutenant, was the recipient of a May 2017 email unveiled by the Post that appeared to show Joe Biden’s involvement with his son’s business dealings abroad.

The email allegedly sent from Hunter Biden’s business associate spelled out “renumeration [sic] packages” for a Chinese venture and a provisional agreement with “10” going to Hunter “for the big guy.” 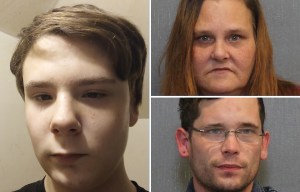 Bobulinski told the Post that “the big guy” referred to Joe Biden and that the “email is genuine.”

“I’ve seen Vice President Biden saying he never talked to Hunter about business. I’ve seen first-hand that that’s not true, because it wasn’t just Hunter’s business, they said they were putting the Biden family name and its legacy on the line,” Bobulinski said.

Bobulinski is the CEO of Sinohawk Holdings, which he has described as “a partnership between the Chinese operating through CEFC/Chairman Ye and the Biden family.”

Steve McManaman: Real Madrid are an aging team. They need new players if they want to reach their previous heights
ISCO could move to Sevilla in January. Lopetegui is personally Interested
Bilyaletdinov about the Champions League: Loco can leave the group. Unmotivated Bayern can be beaten in the 6th round
Zlatan Ibrahimovic: I Thought about retiring, but I wanted to change the mentality of Milan
Vasco da Gama sports Director: Balotelli will be like Maradona for us
Real Madrid won't buy Mbappe in the summer of 2021 due to the crisis (Le Parisien)
Ibra scores in 39, Buffon drags in 42, Ronaldo has no plans to finish. Is football really getting old?
Source https://www.thesun.co.uk/uncategorized/13030984/hunter-biden-ex-business-partner-bombshell-trump-jr/

I’m a Celebrity: Who has been evicted so far?

Boy, 7, left fighting for life after being thrown 100ft from Tate Modern is learning to walk again, family reveal

Debenhams to shut down stores putting 12,000 jobs at risk

Spotify Wrapped: Ed Sheeran and Stormzy are most streamed British artists of 2020

Rare nine-legged octopus discovered by man boiling it for dinner

Cinemas, bars and football stadiums 'could ask' for proof of Covid vaccination

Sainsbury's bidding to raise £8m for most in need this Christmas

Debenhams preparing to close UK stores with 12,000 jobs at risk

ADVERTORIAL: Drivers urged to avoid speeding fines so 'you can keep your money for Christmas'

What Man United player Fernandes did after Cavani equaliser vs Southampton

Government publishes data behind decision to bring in tiers system

'Dumped' car engulfed in flames after being torched near home

How boob sizes have changed through the decades, from Pamela Anderson’s ‘bouncy’ 80s bust to Katie Price’s 00’s 32FFs