A Hull woman has been left horrified after finding a dead spider in her sachet of coffee.

The woman, 27, of west Hull, who does not wish to be named, opened the Nescafe 3 in 1 sachet looking for a much–needed caffeine boost.

Instead, a dead spider fell out of the packet, leaving her shocked. She immediately contacted Nestle which produced the Nescafe products raising her concerns.

The woman said: “To be honest it has traumatised me. I’m wary and rather paranoid of drinking sachets of any kind and especially wary of coffee.

To get the Hull Live headlines to your inbox, click here.

“It made me feel sick. What if the spider was poisonous? Imagine if it has laid eggs in the batch of coffee sachets they sent out. It is contaminated clearly.”

The woman is also deeply unhappy with the response she received from Nestle.

She said: “The response from Nestle has been shocking and disgraceful! I feel they have just pushed it aside. They offered me a good will gesture of £15 just so they don’t have to deal with the situation.

“However, they state the £15 is to purchase more of their goods. Are they joking?!

“For a complaint of this kind to be brushed under the table is disgusting. I have contacted trading standards and Citizens Advice.” 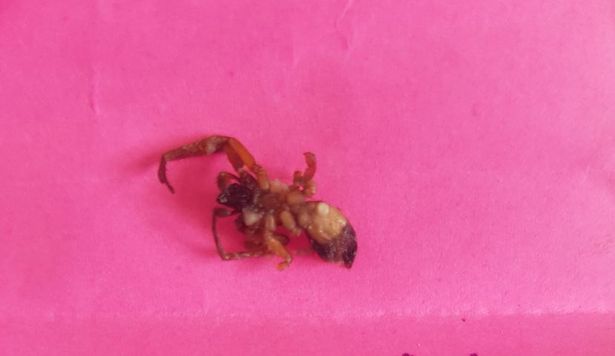 Hull woman finds a dead spider in her sachet of coffee

The woman has been in correspondence with Nestle. After the initial complaint, the company responded by saying: “We were very sorry to learn that you have had cause to complain about the presence of a foreign material.

“We appreciate during this unprecedented time it may not be possible for you to return the item. We'd like to re-assure you we're still keen to investigate the reason for your disappointment.

“We'd be grateful if you can send us a photograph of the goods in question, this will help us start our investigation into the cause of the complaint, with a view to taking steps to avoid it happening again.”

The woman sent over all the relevant information and photographs and then even returned the product complete with spider.

But it was a week before she received a further reply to say an investigation was taking place.

The woman has even emailed the UK CEO of Nestle Stefano Agostini. She then received a letter complete with the £15 voucher towards her next Nestle purchase.

The letter said: “In view of the precautions we take to prevent insects from entering our production areas, we are very concerned that an insect managed to become incorporated in the product.

“This product is manufactured at a high temperature and no insect could survive intact during that production process. Hull woman finds a dead spider in her sachet of coffee

“We have stringent precautions in place in our production areas to prevent insect contamination in our products. All exits and entrances are protected by self-closing doors and exterior windows are fly-proofed.

“Also we employ the services of a leading firm of pest control experts whose specialist personnel make frequent inspections of the premises.”

Nestle also provided Hull Live with a response and insists such incidents are very rare. A spokeswoman said: “We have stringent procedures in place across all of our manufacturing and our teams work very hard to avoid our products leaving our factories any less than perfect.

“This type of complaint is very rare and we will investigate how it could have happened and, if required, take steps to make sure it cannot happen again.”