SINGER HRVY has spoken for the first time of his close friendship with tennis sensation Emma Raducanu, revealing they have been in contact since her astonishing US Open victory.

The former Strictly star, whose real name is Harvey Leigh Cantwell, says the pair are “good friends”, have spoken this week and plan to meet soon on the tennis courts.

He said: “I’ve spoken to her since she won. What an absolute star. She’s amazing.

“We chat all the time. We’re close. We’re good friends.

“She’s just stunned about winning. I watched the match with my whole family, like the rest of the nation.

“She is a lovely girl and she makes me proud to be British.

“She’s waving the flag for us. She’s a talented young girl in the sports industry and she created a really amazing awareness.”

Speaking to promote his new single Runaway With It at London’s Rosewood hotel last week, Hrvy said he hoped Emma would give him a private lesson.

He added: “I’m going to play tennis with her soon. I’m sure she can probably teach me a thing or two.

“It makes me sound really bouji but my family used to have a tennis court, so I actually grew up with the sport.”

Hrvy will be on hand to help Emma deal with her newfound fame, and said: “I think people can be harder on young women and judge them.

“Men can get away with a lot more and that shouldn’t be the case. Women seem to get it a lot harder on social media. I’ve got a lot of female friends and I’m close to my mum.”

The singer, who finished runner-up on last year’s Strictly alongside pro dancer Janette Manrara, first contacted Emma on social media. At the time, he was linked romantically to EastEnders actress Maisie Smith.

Of their friendship, he said: “Maisie is so cool. We got on so well, as we were the youngest ones on the show.

“We really bonded on that level and we would talk all the time. The audience wasn’t as nice to Maisie as they should have been. People were scared of how beautiful, young and talented she was, as they saw her on TV every week.”

DUA LIPA shows she’s no shrinking violet by hitting the stage in a skimpy purple leotard.

The singer celebrated her Hotter Than Hell performance at the iHeartRadio music festival in Las Vegas by partying with rapper pal Megan Thee Stallion afterwards. She later posted vids of the pair dancing on Instagram.

It comes after Megan said: “I really do want to do a song with Dua Lipa. I saw this, like, mash-up on Twitter and it was fire.” 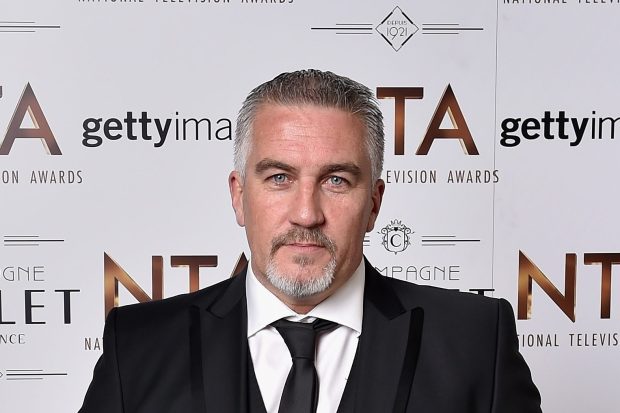 THE Great British Bake Off judge Paul Hollywood has splashed out more than £200,000 of his hard-earned cash on a new F8 Ferrari supercar.

The TV favourite, who returns to our screens next week on the latest series of the hit baking show, is a self-confessed petrolhead.

And sources said that Paul could not wait to get behind the wheel of the supercar, which costs a minimum of £203,476, after being handed the keys.

One said: “It’s no secret that Paul loves his fast cars and bikes, and he’s excited about this newest turbo-charged addition to his garage.”

Paul – who earns a reported £400,000 per series of Bake Off – has owned an impressive series of luxury cars, including an Aston Martin Volante.

The presenter, who is a qualified racing driver, has said in the past: “While baking is my job and what I’m best known for, cars have always been my greatest love.”

Nicola so focused on Ella’s image

NICOLA ADAMS is right behind model girlfriend Ella Baig being on X-rated site OnlyFans . . . and she is behind the camera too.

The ex-boxer and former Strictly star told us: “It’s like Instagram, except she earns money from it. I’m happy to be her photographer.”

Speaking at the launch of Haugen restaurant in East London, Ella added: “We’re really enjoying being one of the few lesbian couples in showbiz right now. A lot of people say we inspire them.”

FREYA TURNS UP THE HEAT 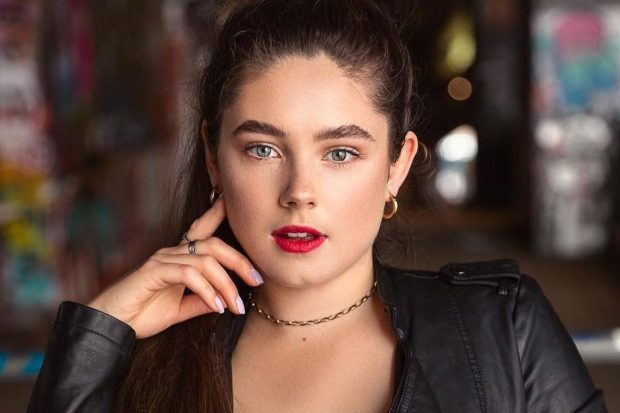 GREAT BRITISH Bake Off hopeful Freya Cox turns up the heat with this sultry pose.

The psychology student is signed with top model agency VauHaus and has done a series of shoots.

It’s good to know that keen horserider Freya has her fingers in a few pies.

Rylan all set to ring changes

RYLAN CLARK-NEAL recently returned to work after taking ten weeks off to deal with the breakdown of his marriage – and now it looks like it could finally be over.

The popular TV presenter, who was widely reported to have split from his husband Dan Neal, whom he wed in 2015, wasn’t wearing his wedding ring while presenting on The One Show on Friday.

It follows months of Rylan stoically keeping it on throughout the summer.

NEIL PLAYING HEART TO GET 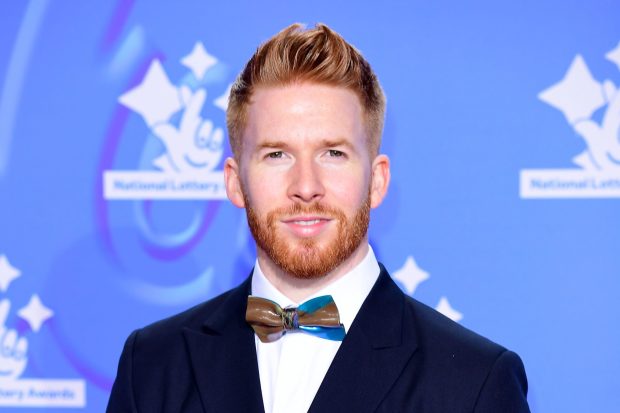 STRICTLY pro dancer Neil Jones was paired with Nina Wadia on last night’s show . . . but we hear there’s another new woman in his life.

Our sources say the pro dancer has been growing close to a stunning fitness enthusiast called Sophie Lily.

And Neil – who was married for six years to fellow dancer Katya Jones – has been showing his appreciation for Sophie’s sexy Instagram snaps by leaving love hearts on her page.

One source said: “Sophie is a gorgeous girl and has really caught Neil’s eye. He’s been sending her lots of flirty messages and she has been responding. It’s been going on for nearly a month now and things are definitely heating up.

“Neil is going to be pretty busy for the next few months with rehearsals, but his chemistry with Sophie has put a smile on his face.”

The love heart emoji is a signature chat-up move for Neil. He used it to express his admiration for old flames Luisa Eusse and Kelly Lopez.

Given how those flings worked out, perhaps Neil should try having a chat instead.

It comes just weeks ahead of the launch of his long-awaited flick No Time To Die, which features ten different motors by the luxury British sports car firm. Eight were made especially for the film, but it is unknown how many remained intact after filming.

In his last outing as Bond, in 2015’s Spectre, ten Aston Martins were used but only three of them survived filming.

In a glossy new book, James Bond’s DB5, Daniel said: “I don’t need to tell anybody how important Aston Martin has been for Bond over the years.

“Not just a car, but a character in each of the movies they appear in.

“I have had the thrill of driving everything from their newest creations to the timeless charm and sophistication of the legendary DB5.

“Every time I get behind the wheel, I smile to myself and I have to pinch myself.

“I am so grateful to Aston Martin for allowing me to play in their sandpit.

“I hope they haven’t minded the odd one I broke.”

BILLY OWES IT ALL TO... BILLY

The actor was unsure about pursuing a career in the performing arts until he caught the hit musical, about a boy discovering a passion for ballet, in London’s West End for his mother’s 40th birthday.

Billy said: “I come from a sporty family and the question was always, ‘Do I go down the sports route or the acting route?’ When I was ten, I went to see Billy Elliot and signed up (for auditions) on the way out. It all went from there.”

DAVID BECKHAM: We love that he took his mum Sandra to the Who Cares Wins awards – on C4 tonight at 7.30pm.

CONOR McGREGOR: The MMA star’s fisticuffs on the red carpet with Machine Gun Kelly at the MTV VMAs was so childish.

The actor was unsure about pursuing a career in the performing arts until he caught the hit musical, about a boy discovering a passion for ballet, in London’s West End for his mother’s 40th birthday.

Billy said: “I come from a sporty family and the question was always, ‘Do I go down the sports route or the acting route?’ When I was ten, I went to see Billy Elliot and signed up (for auditions) on the way out. It all went from there.”

The Club World Cup will be held in the UAE in early 2022 (Tarik Panja)
A bunch of clowns. Griezmann's father on the removal of Antoine and yellow Zlatan in the Champions League
Juventus players are called humpbacks. Perhaps Benito Mussolini Stadium is to blame
Infantino about the World Cup every two years, but with different teams: We need to think about it. It is necessary to expand the list of participants
FIFA will discuss calendar reforms and the World Cup every 2 years at a summit on December 20
Ceferin - Infantino about the World Cup every 2 years: The consequences can be terrifying. This is harmful for clubs and leagues, but they do not have the right to vote
Newcastle gives Dembele a salary of 15 million euros a year and a signing bonus of 15 million. Barcelona will not repeat this offer

Westminster Dog of the Year: All the dogs competing for the crown

Where is Myakkahatchee Creek?

Spy Kids star Alexa PenaVega reveals son, 2, lost his FINGER after she shut the door on his hand in ‘traumatic’ accident

Dominic Calvert-Lewin injury: Everton striker out for a ‘number of weeks’ after suffering setback

How Tottenham could line-up in Europa Conference League as Nuno leaves stars at home and Dane Scarlett, 17, set to start

From ditching halogen to not leaving appliances on standby, basic ways to go green and save money

Paris Hilton calls for 'bill of rights' for children in care

‘When every country’s term paper is due’: Tom Steyer says Cop26 summit poised to be ‘transformational’

Sajid Javid warns pandemic is ‘not over’ saying cases could hit 100,000 a day

Javid vows to protect NHS as he says Covid infections could hit 100,000 a day

Yes, we have to live with Covid – but not with such irresponsible ministers | Philip Ball

South Africa starts vaccinations for those aged 12 to 17

What is the Law of Action?

Racing tips: Templegate NAPS 11-4 shot at Carlisle who ran a screamer at Cheltenham last time out

Inside the Harry Potter Forbidden Forest experience with wand battles, centaurs and butterbeer

Concetta Caristo: the 10 funniest things I have ever seen (on the internet)

The most popular fashion brands and products revealed

Covid daily cases could soar to 100,000 this winter, Sajid Javid warns: ‘Pandemic is not over’

Son furious as ‘Eon tries to charge parents £16,850 a year for power to small two-bedroom house’

UK could be hit with 100,000 cases a day and 1,000 hospitalisations in winter months, Sajid Javid warns

Coffee machine Black Friday deals 2021: What to expect in the sale from Nespresso, De’Longhi and more

Where is Brian Laundrie now?

Drivers face £5,000 fine and nine points for wearing Halloween costume behind the wheel

Who are Maya Millete’s parents?