LAST week, Little Mix star Leigh-Anne Pinnock announced her pregnancy, shocking fans all over the world - especially as no one had noticed a baby bump while she'd been doing promo for her new single, Confetti.

And this week, her Little Mix bandmate Perrie Edwards has done exactly the same thing - revealing she's pregnant with her and boyfriend Alex Oxlade-Chamberlain's baby.

Leigh-Anne, 29, proudly unveiled her bare bump on Instagram, posing in some gorgeous pictures with her fiancé Andre Gray.

She captioned the post: “We've dreamed about this moment for so long and we can't believe the dream is finally coming true... we can't wait to meet you.”

Perrie, 27, took to Instagram a few days later, choosing to bare her bump in a black and white image, wearing a bra, posing next to her footballer boyfriend Alex.

She wrote: "So happy to be on this wild journey with my soulmate. Me + Him = You 🌎♥️

But, while fans were overjoyed for Leigh-Anne and Perrie, many couldn't help but point out the lengths their bandmate, Jade Thirlwall, had gone to in order to make sure her best mates' secrets weren't unveiled too early.

The girls have done everything from wearing baggy outfits to posing in front of each other's bumps, and now body language expert Judi James has exclusively revealed to The Sun just how protective the girls have been of each other.

As a trio, Little Mix have recently been posing for lots of pictures together, and they've made sure to cover Leigh-Anne and Perrie's bumps constantly.

While Perrie's jacket slightly hid her bump, Judi notes how Leigh-Anne tends to be in the middle so Perrie and Jade could "subtly eclipse her body as they pose around her".

On Valentine's Day, Little Mix shared a picture together, likely to have been taken not long after finding out about their happy news.

And Judi says: "Their cluster signals suggest emotional bonds plus a desire to protect each other, although it’s clear they’re also keen to share their pride and their happiness more openly.

"Perrie’s signals are very much ‘big sister’ as she rests one hand on Leigh Anne’s shoulder and tilts her head towards her in a gesture of both pride and a desire to protect.

"Jade is more snuggled in to Leigh-Anne, using her body as a protective barrier and closing her eyes with a wide mouth smile that suggests she’s sharing Leigh Anne and Perrie’s blissful happiness and excitement."

Little Mix delighted fans when they dropped their music video for their new single, Confetti.

As well as wearing baggy tracksuits for part of the video, each of the girls cross-dress in the vid, wearing oversized, baggy clothes to help conceal their identities - as well as their physical appearance.

The video is a far cry from their previous one for Sweet Melody, in which Perrie, Leigh-Anne, Jade and Jesy writhed around in black, barely-there outfits.

This would have been harder for Leigh-Anne and Perrie to conceal their bumps in outfits like that, so the girls clearly came up with something creative to keep the secret for longer.

Little Mix are known for wearing very skimpy outfits, and have even been blasted by the likes of Mel C for their clothes in the past.

So it has been quite surprising to see Perrie, Leigh-Anne and Jade rocking baggy outfits while promoting their first single as a trio, Confetti, recently - after Jesy Nelson quit the band to go solo earlier this year.

Fans initially put the change of style down to a rebrand following Jesy's exit, but, since Leigh-Anne and Perrie announced their baby news, it's clear they were just making sure they were able to distract from the growing baby bumps. 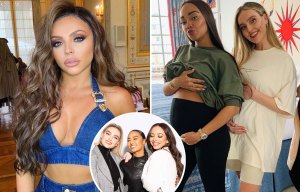 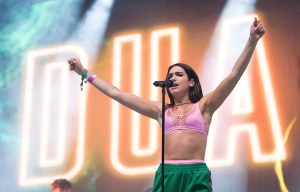 What time are the Brit Awards 2021 and how can I watch them? 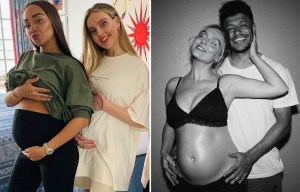 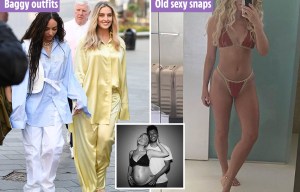 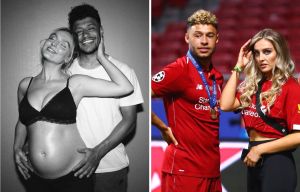 Who is Perrie Edwards' partner & father of her child Alex Oxlade-Chamberlain?

In fact, body language expert Judi says: "They’ve even gone one step further by allowing Leigh-Anne to wear the sexiest outfit, with her legs being shown off, while Jade and Perrie are both completely covered by their pyjama suits."

Noting how Jade is extremely happy for her pals, while the others are buzzing for each other, Judi adds: "Those protective traits and the mirrored joy are still visible.

"Jade eye-checks Leigh Anne as though sharing a secret as well as some concern that she’s happy and ok, while Perrie walks slightly behind with her eyes down but a smile of suppressed happiness hinting she’s bursting to share the good news."

Roberto Donadoni: Ronaldo scores a lot, but Messi is more important. In terms of technique, he is on a different level
Joel Glazer: Debt has never stopped Manchester United from signing players. Planning transfers
Lev before the game with France: I am calm, because Germany did what they wanted in the last 14 days
Skrinjar-player of the match Poland - Slovakia. Inter defender scored the winning goal
Czech Republic coach Shilgava: The main thing is that we survived the starting pressure of Scotland. Then we went into the game
Laporte wants to move to Barcelona and asks Man City to let him go
Krychowiak received a red card in Poland's match against Slovakia. This is the first elimination at the Euro

Latest: All 5 areas with highest Covid cases are in Lancashire