Hotel worker Darren Coyne ended up with a shortage of PPE… after his pet dog ate 30 of his rubber gloves.

And seven-year-old Rottweiler Rambo needed a three-hour ­operation to remove the items, which could have killed him.

The dog had found the box of gloves in Darren’s car and hid them under a bed before scoffing the lot.

His owner only realised when the pet, who didn’t appear to be ill, brought one up.

He took Rambo to a vet, who spotted the other gloves inside him during an endoscopy.

Darren, who had been provided a number of boxes of PPE gloves to help him with his role at Holiday Inn, said he was “gobsmacked”. 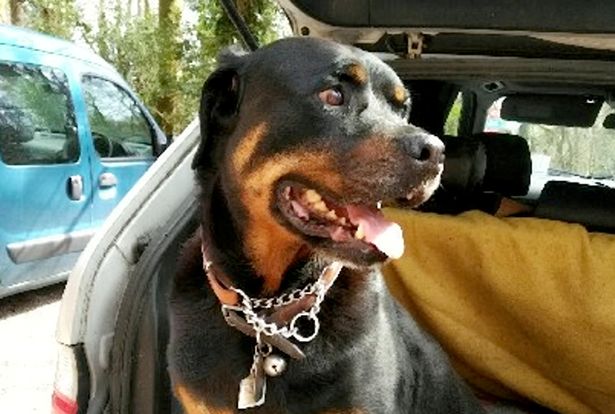 Rambo looking none the worse for his glove-eating ordeal (Image: Vets4Pets / SWNS)

Rambo would be taken in the car for local exercise walks, and would travel in the rear of the car, near where the gloves were stored.

Darren said: “I thought they might find one or two, but I was gobsmacked when they pulled out 29.

“I’ve been taking Rambo in the car with me for many journeys and he’s never paid much attention to anything in the car. “I just assumed I’d used all of one box, which is why Rambo got away with eating them.

“When he was sick with a glove I recognised it and searched the car for any evidence of him eating anything else.

“That was when I found the box hidden underneath his bed and the missing gloves.” The first glove is located in Rambo's stomach through the endoscopy (Image: Vets4Pets / SWNS)

Keith said: “Each time we pulled a glove out, we went back to check it was the last one and found another one. It was something we’ve never seen or heard of before.

“While Rambo was outwardly in a healthy condition, it wouldn’t have taken much for his situation to have turned critical and his owner’s quick thinking to bring him in effectively saved his life. Some of the gloves retrieved from Rambo's stomach (Image: Vets4Pets / SWNS)

Darren said: “I thought they might find one or two other gloves, but was absolutely gobsmacked when Keith and his team eventually pulled the 29 gloves out.

“I can’t thank them enough for how they helped Rambo, particularly as he seemed to be his normal self and oblivious to the dangerous situation he was in.”

Rambo was able to go home less than 12 hours after arriving for his endoscopy and has now fully recovered. Keith added: “Dogs are inquisitive animals and the huge increase in usage of PPE gloves thanks to the Covid-19 pandemic mean they’re more likely to come across these new and potentially fragrant items.

“While Rambo was lucky, other pets might not be, so we’d encourage all owners to make sure to keep items that dogs or other pets shouldn’t have, way out of reach.

“But, if something does happen, then following the steps Darren took will really help their pet’s predicament.” Rambo is lucky to be alive (Image: Vets4Pets / SWNS)

Rambo is now separated in the car from anything he could possibly eat, and the gloves stay firmly locked away.

“He’s a lucky dog, the gloves are now stored away out of his reach and I’ve told him ‘hands off’ my equipment,” added Darren.

Rambo has now fully recovered from his ordeal.