THE McQueens' blackmailer will finally be revealed on Hollyoaks in a 25th birthday special episode.

Hollyoaks will show viewers who the sinister blackmailer in tonight's episode, The Sun Online can reveal.

The McQueen family were thrown into chaos when a sinister culprit started threatening them over their secrets.

Mercedes, played by Jennifer Metcalfe, and Theresa McQueen, played by the recently returned Jorgie Porter, found a creepy doll standing on the bar of The Dog.

Theresa McQueen (Jorgie Porter) also reunites with the rest of her family as she returns to the village in the new storyline, after enjoying the last four years in Spain.

The macabre doll revealed that unless the family pays up, all of the family's biggest secrets will be revealed.

Mercedes has refused to meet the doll's demands and her husband Sylver paid the price, after he was arrested for his mum Beda's murder.

The creepy doll recorded him saying he was responsible for his mum’s death and the footage was delivered to the police.

In Wednesday's first look episode on E4, the creepy doll gives them family until noon to work out who the blackmailer might be, but Mercedes again refuses to play along.

She puts on her familiar red dress and drags the family to The Dog to try and dance their worries away.

But what viewers see and the McQueens don't know is that someone is watching the family's merriment through the window, and could very well be the blackmailer.

Mercedes actress Jennifer Metcalfe said she was "shocked" to find out who the blackmailer was. 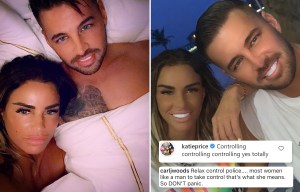 She told Inside Soap: "I'm excited to see the reaction – I know who it is and I couldn't believe it! I hope viewers are as shocked as I was."

Jorgie Porter teased Hollyoaks fans telling them to be "excited about what the show has in store for the big reveal.

"I think you'll all be very excited. It's the 25th birthday, which is a big deal for Hollyoaks, and you just don't know who's going to pop up…" she told Digital Spy.

Hollyoaks is celebrating its 25th anniversary all this week and continues on weekdays on Channel 4 on at 6.30pm followed by a first-look episode on E4 at 7pm.

Gasperini on 2:0 with Liverpool: This is unbelievable. Atalanta played their football
Simeone on Maradona's death: Impossible to believe. He infected us with football. This is a great loss for me
Bayern and city are already in the Champions League play-offs. Who is already with them, and who is in step?
Conte Pro 0:2 from Real Madrid: We saw the difference between them and us. Inter made too many gifts
Liverpool have never scored a goal against Atalanta in their home Champions League match
Liverpool lost at home for the first time in 2 years! Gave Atalanta a couple of goals and never hit a goal
Zidane about 2:0 with Inter: real deserved to win by playing well. I am very happy with the players
Source https://www.thesun.co.uk/tvandshowbiz/12986998/hollyoaks-shock-as-mcqueens-stalker-revealed-tonight-birthday-episode/