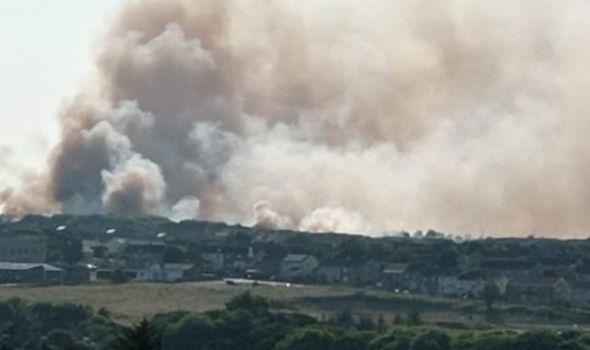 Highlands wildfire: Thick clouds of smoke as firefighters battle raging blaze in Scotland (Image: Ron Gunn/Facebook)
Sign up to receive our rundown of the day's top stories direct to your inbox

Firefighters were called to Thurso moors in the Highlands at 4pm and the blaze continues to rage.

Ron Gunn shared a shocking photograph of smoke above the town, which has a population of around 8,000 and is located on Scotland's north coast.

He wrote: "This looks a bit serious."

Resident Billy Gray captured video as work to extinguish the fire was under way.

He told Express.co.uk: "At about 4pm, I was heading upstairs and I have a window that looks over the Thurso moors.

"I saw lots of smoke and it just got worse.

"At 4.15pm, I called the fire brigade who were aware of the situation.

"I continued to spend most day upstairs monitoring what is going on as it was not far from my house.

"By about 9pm it looked well under control there were plenty appliances at the scene."

Olly Stephen’s dad breaks down as he blasts ‘vain selfish girl’, 14, who lured his son, 13, to Snapchat ‘execution’

Yves Saint Laurent to stop use of fur by 2022

Four-bed townhouse in North London on sale for £500,000 but every room, hall and stairwell is piled high with junk

New head of Time's Up pledges openness after Cuomo scandal

Daily pill to treat Covid at home could be available in MONTHS, scientists say

Teachers can suffer with maths anxiety as well as pupils, says expert

Gabby Petito sent a message in ‘morbid’ knife emoji Instagram post where she wished to be in North Carolina, sleuths say

Who is Tom Ballard’s sister Kate?

Petrol panic as huge queues line up at Scots pumps

'That's quite strong!' Sophie Wessex caught by surprise as she samples whisky

ADVERTORIAL: 'We all deserve a certain minimum' - teacher reveals sad incident that opened her eyes to hygiene poverty

Why are Apple and Fortnite fighting? Tech firms locked in legal battle

Climate strikes: Why are young people across the world taking to the streets?

Boy, three, died after being run over on farm as he was playing with his sister and cousin

Shoppers should brace for price rises of five per cent, warns retail expert

I love ISAWITFIRST's work attire for every occasion

Traffic delays and huge queues as people rush to get petrol

ADVERTORIAL: 4 top tips from Merian Odesho on how to detangle your hair and reduce breakage