Steven Gerrard's side raced out of the blocks at Easter Road and goals from Ryan Kent and Joe Aribo stunned the hosts inside the first 10 minutes.

Jermain Defoe drilled in a clinical third before Ryan Porteous was sent off for a reckless lunge at Borna Barisic.

Overall, it was an impressive showing from the Ibrox side as they responded to Celtic's 2-0 win at Tynecastle on Wednesday.

Hibs keeper Ofir Marciano was caught cold in the opening minutes and his lazy clearance was deflected into the path of Kent and he lashed high into the net.

Aribo, outstanding in an advanced role off the left, then sidefooted in a stunning second after combining with Ryan Jack.

Jack Ross' side fought back briefly after the break but Defoe's deadly third sealed the points for the visitors.

You can look back over all the action below.

A comfortable victory for Steven Gerrard’s side marred by some ugly incidents on and off the pitch.

Goals from Kent, Aribo and Defoe were the difference but headlines will focus on Barisic being targeted by a bottle as he received treatment from Ryan Porteous’ red-card challenge.

With victory, Rangers cut the gap on Celtic back to two points.

They’re not letting up as we enter four minutes of stoppage time.

The visitors are proving patiently in and around the box with Hibs looking increasingly weary.

Hibs look to break quickly in behind but Goldson is quickly across to outmuscle Doidge and retain possession for his side.

A little bit of afters between Doidge and McGregor.

The Rangers keeper shepherds the ball out of play and the Hibs striker drags him down the shirt, McGregor knocking into the advertising board as he hits the deck.

Ryan Jack, who has been excellent again, is replaced by Greg Stewart.

Rangers about to deliver a corner.

Tavernier in so much space

The right-back has enjoyed the freedom of Leith this evening, although Aribo’s influence in opening up that space can’t be underestimated.

Brandon Barker next to come on for Rangers, a former Hibs loanee, of course.

The winger about to be Rangers’ first sub.

The tempo has dropped significantly after that unplanned interval and Rangers are simply seeing this one out.

There’s still some football to be played, after all that commotion. 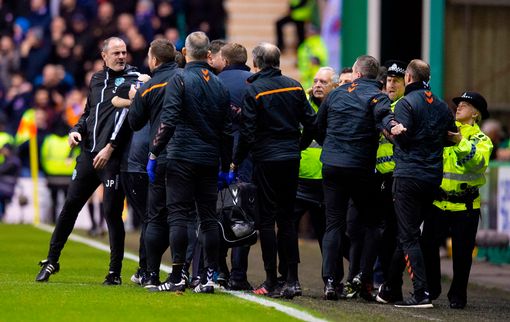 Hibs coach John Potter and his Rangers counterpart Tom Culshaw have now been sent to the stands for their part in the touchline rammy.

Daryl Horgan and Connor Goldson have been booked in the aftermath.

Nick Walsh now making his way over to the touchline... 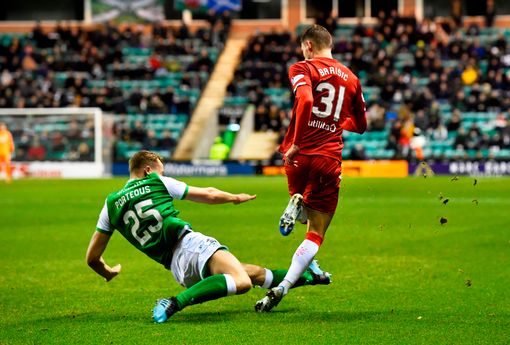 Ryan Porteous shown a straight red for a wild challenge on Barisic.

There was no hesitation from the referee and Porteous can have little complaint, he’s cleaned out Barisic.

The tackle sparked a furious reaction from the Rangers bench and there’s coaches from both sides having to be kept apart.

Barisic, meanwhile, is back on his feet after receiving treatment on the pitch.

The home side were coming into the game before that goal but it’s all Rangers again now.

Their players, however, still have another 32 minutes to endure. 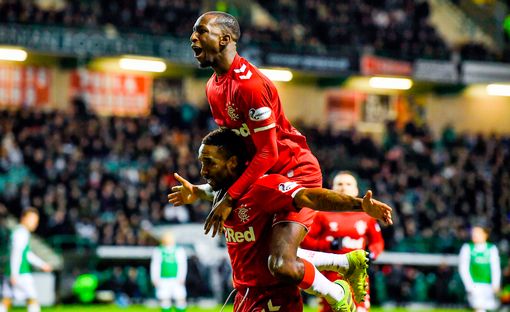 Hibs clear their box initially but the visitors keep it alive and the ball loops towards the striker at the back post.

He controls on his chest but it’s the second touch, jinking back inside before he drills low past Marciano, that makes the difference.

Brilliant work again from the midfielder as he drifts in from the left, leaving defenders in his wake.

But, under pressure from Stevenson, he skews his shot well wide with his weaker right foot.

The delivery is floated to the back post and the final touch appears to come off Katic.

Again, though, Nick Walsh points for a goal kick.

Ryan Porteous isn’t happy with that.

Good work again from Boyle and he forces another corner.

Before we get on with it, Nick Walsh books Melker Hallberg for an earlier challenge on Scott Arfield.

He’s been Hibs’ brightest spark and the winger pounces on a loose ball to drive forward and force a corner.

The home side have started this half on the front foot.

Kent looks to charge upfield on the counter and is cut down by Boyle.

Into the the book he goes.

Instant impact from Horgan as he feeds a dangerous cross into the box but it evades everyone and goes agonisingly wide for the hosts.

Horgan and Slivka are indeed on, for Mallan and Kamberi.

That will surely dictate a change of shape from Hibs as well. 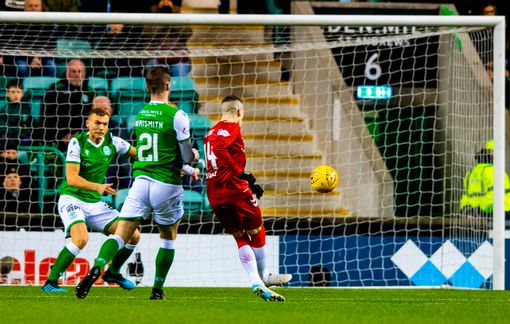 A devastating opening from Rangers put them firmly in control at Easter Road.

Marciano’s error allowed Kent to fire home the opener before Aribo, who has been outstanding, finished off a sweeping move with a stunning finish.

Hibs’ diamond shape is playing right into Rangers’ hands and they could easily have scored more.

Plenty for Jack Ross to fix at half-time.

Rangers cut through Hibs with ease again - Arfield’s dummy allows Kent to clip in behind for Kamara who’s low cross is just about dealt with at the back post.

However, the midfielder had strayed offside before delivering.

Another nice move from the visitors, though.

Patient build-up from Rangers ends with Tavernier heading into the grateful arms of Marciano.

Barisic whipped a pin-point cross onto the head of the captain but he couldn’t quite direct it far enough into the corner.

Still 2-0 as Lewis Stevenson goes into the book for a foul on Tavernier.

Jack floats a ball out to Tavernier on the right and he whips a superb low across down the old ‘corridor of uncertainty’.

There are no takers in the six-yard box, however, and Hibs escape again.

That wasn’t too far away.

Mallan cuts across a shot that spins just wide despite provoking little to no reaction from McGregor.

Inter striker Esposito goes on loan to SPAL
Frank de Boer will lead the Netherlands national team. Contract - for 2 years
Dynamo Stavropol about the match with Rotor: Transfers in the Russian Cup are prohibited. The RFU said that there is no way back
Maccabi entered the Champions League without 11 players due to covid. UEFA allows you to play if there are 13 players from the application
Ole Gunnar Solskjaer: De Gea saved us for years, Henderson did the same today. Lingard played well
The semed said goodbye to Barcelona: Thank you for the opportunity to realize the dream. Eternally grateful
Juve have leased Morata from Atletico for 10 million euros with the right to buy out for 45 million
Source https://www.dailyrecord.co.uk/sport/football/hibs-vs-rangers-live-score-21135917

Google Maps reveals how Bradford has changed in past decade

Man City have improved their defence without buying a defender

On the crest of a wave after shortlist success