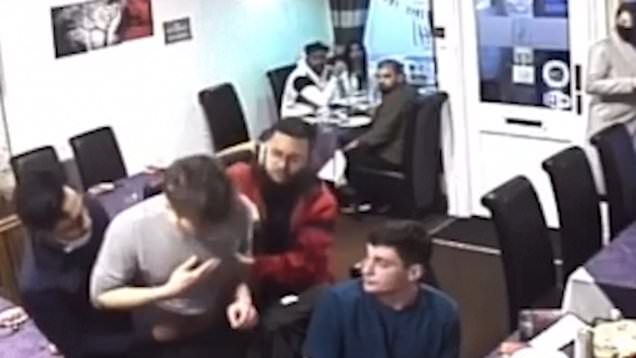 Jake Snelling, 19, couldn’t breathe and had gone red-eyed as he choked on a bite of curry at Bangor Tandoori in North Wales.

But Sheikh Rifat, 24, came to the rescue by springing into action and performing the Heimlich manoeuvre.

A video of the tense incident shows him perform the action repeatedly until a bit of food comes out.

The restaurant erupts in applause as Jake leans against the chair and takes deep breaths following the incident.

University student Sheikh has been hailed as a hero, with local police officers even saying they hope he will come to work for them one day.

After presenting him with a certificate of appreciation, North Wales Police said: ‘Rifat received a presentation from a number of guests attending a ceremony at Bangor Tandoori.

‘He was thanked for his heroic actions after he recently helped a man who was choking, therefore saving his life.

‘We were privileged to be invited to thank Rifat and congratulate him on his first aid skills.

‘It is hoped that he will one day join North Wales Police and be part of the policing team in Bangor. We wish him well with his application.’