For Daniel Levy, the backdrop at Tottenham takes in an increasingly angry fanbase and a team that have fallen short of expectations this season. The chairman backed José Mourinho to deliver a trophy and then, with results having stalled, sacked him six days before the Carabao Cup final on 25 April. The bullet had been loaded and yet the timing of its discharge does not look any less curious today.

Ryan Mason, the 29-year-old caretaker, in his first managerial post, is trying manfully to steady the ship, although it is easy to feel sorry for him as he sits in the crosshairs of media conference questions that he cannot answer. He is a temporary appointment and so he has no say on club strategy decisions such as recruitment, player departures or, cough, joining a European Super League.

For some supporters, the move to sign up to the doomed breakaway was the final straw; the moment when their dissatisfaction at Levy’s running of the club morphed into calls for him to leave. Hence the recent protests outside the stadium and the way that #LevyOut has trended on Twitter.

The search for a manager, meanwhile, rumbles on. The club have spoken to candidates, including Bayern Munich’s Hansi Flick, although it still seems that he will take over the Germany national team from Joachim Löw after Euro 2020 . There has also been a conversation with Ralf Rangnick, the former RB Leipzig manager. It is unclear whether that was about the manager’s job or a director’s position.

And so for Levy, fighting fires on multiple levels and with uncertainty swirling, it was difficult to imagine a worse time for Harry Kane to take the pin out of a hand grenade that he had held for some time. The striker’s decision to push for a transfer this summer threatens so much at Spurs but not least Levy’s chairmanship. Because were he to sell a generational talent, one who connects so easily with the fans, it is easy to see the formation of a scar that will never heal.

There is anger at the club over the timing of what one back-page headline called the ‘H Bomb’, coming as it did at the start of the final week of the Premier League season, with the team still trying to salvage European qualification. 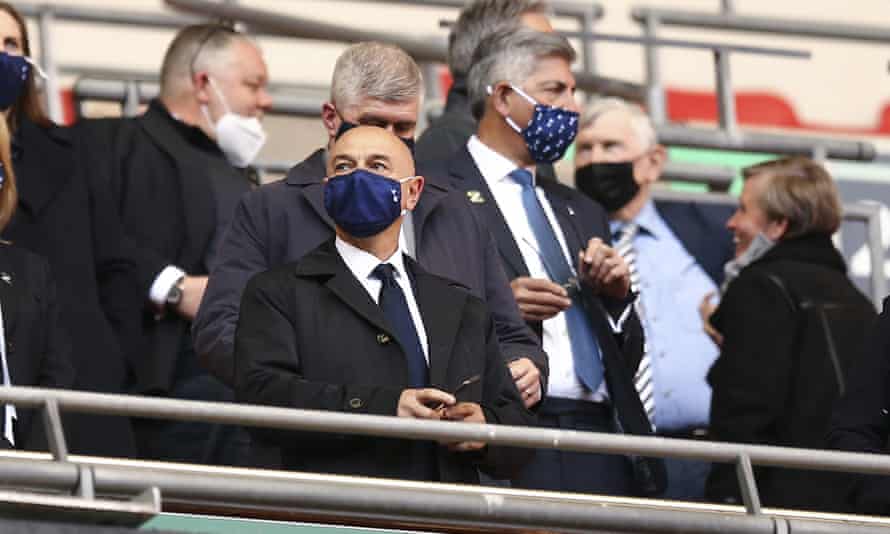 Daniel Levy has overseen the sales of Gareth Bale and Luka Modric at Spurs, both to Real Madrid. Photograph: Michael Zemanek/BPI/Shutterstock

They face Aston Villa at home on Wednesday, then travel to Leicester on Sunday. It was not what Mason needed before his press conference on Tuesday lunchtime, although he was never going to throw any shade in the direction of his close friend. And it was certainly not what Levy needed as he tries to secure the new manager. It makes that particular pitch even harder.

What Levy must decide is whether monies raised from selling Kane could fund an overdue rebuild of the squad; a move to make the collective stronger. In other words, could he sell a prospective sale to the supporters?

It is extremely questionable, mainly because to strip Kane from this team is to lose both its heartbeat and cutting edge. The message it sends is the wrong one, of a club being backed into a decision it would not proactively seek – however unfair that might be on Kane who, until now, has brought only positivity. It was Kane’s decision to sign a six-year contract in 2018, which was always going to confer upon Levy a degree of control.

Double despair for Chelsea and Alisson in wonderland – Football Weekly

The idea has to be to sell from a position of strength and there is no guarantee that Spurs would be able to emerge as a more cohesive whole given the difficulty of adding the right players in the coronavirus market place. When they sold Gareth Bale to Real Madrid in 2013 for £86m, only one of the seven players from the spree that summer was an unqualified hit: Christian Eriksen.

Kane believes that he has a deal with Levy from last summer when he was considering his future; if he stayed and gave his all under Mourinho, Levy would allow him to leave this time out.

We have been here before. Luka Modric claimed in 2011 to have reached an agreement 12 months previously with Levy that, if he signed a new contract, he would be permitted to move if “a bigger club came in with a concrete offer”. Chelsea did that but Levy refused to sell. Modric had to stay for another season before he got away to Madrid in 2012.

Levy has been criticised for not knowing the optimum window to sell a player, not least towards the end of Mauricio Pochettino’s managerial tenure. Players effectively went past their sell-by dates and ended up digging in, running down their deals and stunting the natural ecosystem of a club, the processes of renewal.

But with Kane, it is not as simple as getting a massive fee (if anybody, most likely one of the Manchester clubs, can pay it) and cashing in. With the battle lines drawn, Levy will play the game on his terms, at his pace and, as always, he will rely upon the player to show professionalism if he ends up being held to his contract.

Kane has made his move, it is an aggressive one and he has further cards to play, including the submission of a transfer request. Whichever way he slices it, Levy is in a horribly tight spot.

Echo Comment: Despite all the Brexit fears, Nissan is still here, making Qashqais

Teaching assistant, 57, ‘groomed and sexually abused vulnerable boy between the ages of 12-14’

Tariffs axed immediately on Australian beef and lamb, triggering fears that farmers will be sent ‘to the wall’

What They Want: Divergent goals for Biden, Putin at summit

Cumbria's new Covid cases with rises in the Lake District, Carlisle and Barrow

Stacey Solomon thanks NHS as Rex has lip operation in hospital