HARLEQUINS promised Mike Brown that they will 'go balls-out to defend him' after his red card for a head stamp.

The moment of madness from the England man threatened to ruin an end-to-end and crazy game that was lit-up by Marcus Smith's heroics.

Full-back Brown saw yellow in the first-half for a deliberate knock-on.

And just three minutes after the break he was off in disgrace after an ugly incident at the breakdown as he stepped on Tommy Taylor's face.

This was his 351st and final game for the Londoners after 16 seasons - as a hefty ban is now likely to come his way.

The 35-year-old, who couldn't even drown his sorrows at The Stoop bar named after him, joins Newcastle Falcons in the summer and could miss games for them, too.

First, though, Quins have promised to defend their man as he stares at a minimum six-week punishment for the studs-up shocker.

Ex-Lion Adam Jones, now a coach with Quins, said: "In those situations when you’re being held in it can look a lot worse than it was.

"There was a lot going on as it happened. Let’s wait until next week and see what happens.

"He is gutted. I’m sure the club will go balls-out to defend him as much as we can. 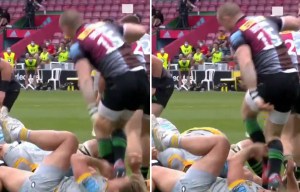 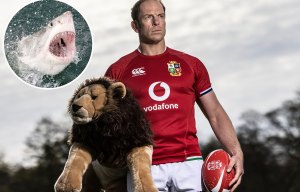 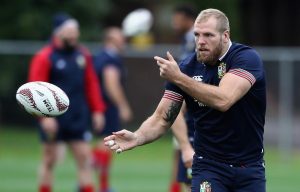 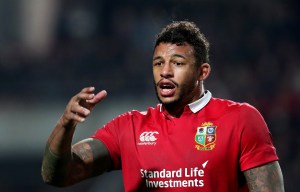 "Hopefully common sense prevails and the different issues with it come through."

As Brown lost his head superb fly-half Smith kept his with a club record 28 points in a 94-point epic.

But by the time he scored his last-second winner in this 12-try thriller, England boss Eddie Jones had bizarrely already GONE HOME.

Jones has refused to cap Smith, 22, though Lions boss Warren Gatland has him in his sights as an injury-replacement for this summer's tour of South Africa.

"He’s a young kid, but is growing all the time. He was chatted about with the Lions - so Gats has obviously seen something special in him as well.

"He was brilliant. It’s a pleasure having an outside half like that. I’ve got to be honest, if he was Welsh he would have 50 caps by now.

"He’s very much of the Welsh outside-half ilk. Hopefully he gets picked in the summer and I’m sure he’ll do a grand job.

"Looking at him last year it was whether managing a game was his strong-point, we know he runs the ball and takes it to the line well.

"But he’s an all-round player now. He’s a great goal-kicker, his line kicking is outstanding, his game management is outstanding.

"The try we scored at the end was unbelievable. That’s the club’s DNA all rolled into one. I’m lost for words a bit. It was mad."

"I want to be sat here being really positive about the things that have gone well but we can't because we've conceded 48 points to lose a game.

"It wasn't just the last ten minutes, it was throughout the game. Our defence fell off a cliff."