Thomas Tuchel laid the trap and Manchester City walked straight into it, ending their hopes of an unprecedented quadruple. Outfoxed tactically, Pep Guardiola could not complain about losing to his friend for the first time in six matches. Chelsea were worthy winners and deserve their place in the FA Cup final after beating City with a deft counterattacking goal from Hakim Ziyech.

This was no smash and grab from Chelsea. When City return to Wembley for the Carabao Cup final next weekend, they will be glad to find Tottenham there rather than Tuchel’s side. Clever and controlled, Chelsea outplayed City for long stretches and will be confident of winning their first trophy under Tuchel when they meet Leicester or Southampton in the final. For City it was an evening to forget, with their disappointment compounded by Kevin De Bruyne limping off with an ankle injury at the start of the second half.

The level of tactical expertise on the sidelines ensured that both sides could not have been better prepared. The level was high from the start, the mood intense, and there was a constant sense that the slightest mistake would receive the severest possible punishment. Neither team were geared to wait and feel their way into the contest, summed up by City’s high press forcing Kepa Arrizabalaga to concede possession with a stray clearance a mere 14 seconds after Chelsea had kicked off.

Standing in his technical area, Tuchel flung his arms above his head in frustration as Arrizabalaga’s hasty ball out from the back drifted to a light blue shirt. Yet Chelsea’s back three refused to be intimidated when City’s forwards hounded them. Jorginho was fulfilling his duties in midfield, accepting the ball in difficult positions and setting the tempo, while N’Golo Kanté was full of energy, snapping into tackles and causing problems with some surging runs from deep.

Tuchel wanted his team to be brave and for a while it was Chelsea who called the shots, dominating possession and creating early openings. There were six minutes on the clock when Timo Werner broke down the left, flying away from Aymeric Laporte before finding Ziyech, who fired past Zack Steffen from close range. Although the flag went up late for offside against Werner, it was a sign that Chelsea could hurt City on the break.

Werner’s speed was a concern for City and there was a balance to Chelsea. Building carefully, they threatened again when Ziyech cleverly released Reece James on the right. The full-back had time to cross and he was entitled to expect a better finish when his delivery reached the unmarked Ben Chilwell, who sent a weak volley wide. 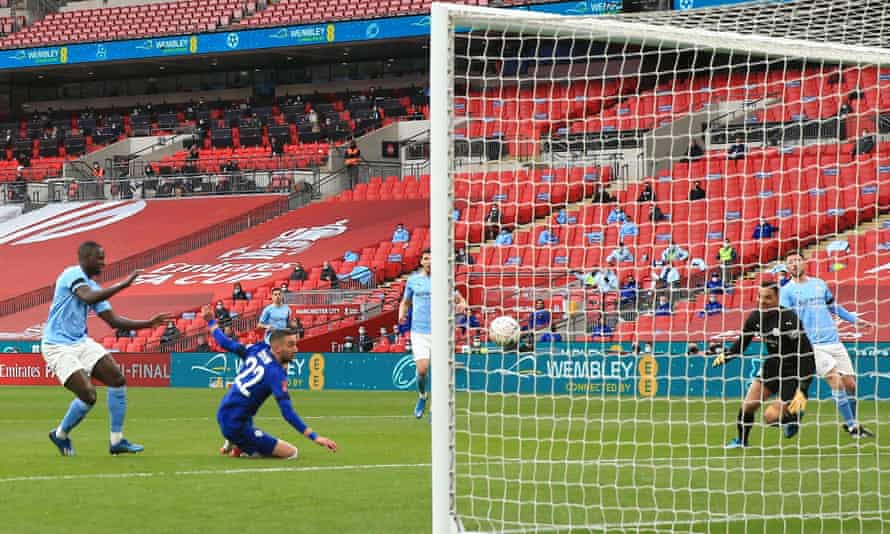 Chelsea were rattling City, who looked slightly uncertain after making eight changes to the team that beat Borussia Dortmund in the Champions League in the week. Even De Bruyne was misplacing a few passes. Chelsea’s belief was growing.

Chilwell and James were progressive wing-backs and the movement of Chelsea’s front three was impressive at times. Ziyech was intelligent in possession, Mount caused panic with a driving run and Werner, always playing off the shoulder, forced Laporte into another important block after breaking down the right.

For all their good play, though, Chelsea struggled to create clear openings. Steffen, deputising for Ederson in goal, did not have much to do and City began to settle as the half wore on, forcing Chelsea to defend more.

All the same, Guardiola needed more from his attack. Although Gabriel Jesus tested Arrizabalaga with an effort from 20 yards, Raheem Sterling and Ferran Torres were quiet and City suffered a blow when De Bruyne pulled up with an ankle injury three minutes into the second half, forcing the Belgian to make way for Phil Foden.

City were bereft of a spark in the final third, summed up by Sterling’s wastefulness when Fernandinho burst through the lines in the 55th minute, finally finding a hole in Chelsea’s defence. Offered a chance to test César Azpilicueta’s ability to defend one-on-one, Sterling could do nothing more than spurn the opportunity by running straight into the centre-back before giving away a free-kick with a clumsy foul.

It has not been an easy season for Sterling, who has fallen out of favour in recent months, and his indecisiveness looked even worse when Chelsea took a deserved lead moments later.

For Tuchel, the goal was reward for his plan to punch at City’s high line. It was a clear tactic and it worked when Mount, such a clever player, poked a lovely ball through for Werner to race away down the left. He had timed his run perfectly this time and when Steffen came off his line to close the angle, the German was composed enough to roll the ball across for Ziyech to scoop a finish into the empty net.

It was a beautifully worked goal. Once again Chelsea were benefiting from Tuchel’s shrewd tactical mind. Chelsea had spotted a weakness in City’s defence and they almost exploited it again four minutes later, only for Ziyech to shoot straight at Steffen.

Chelsea had to drop back after that miss, trusting in Thiago Silva and Antonio Rüdiger to stand firm. The pressure was relentless and Silva had to make way for Kurt Zouma. When Sterling fired over, though, City’s race was run.