Rare images of a group belonging to one of the most endangered gorilla subspecies in the world suggest their numbers could be recovering after decades of persecution, conservationists in Nigeria have said.

A group of six Cross River gorillas including infants of varying ages can be seen in the first known camera-trap images of the species, taken in the Mbe mountains in south-east Nigeria by the Wildlife Conservation Society (WCS).

The gorillas are rarely seen and are thought to be extremely wary of humans following a long history of persecution. They often reside in the deepest, most inaccessible pockets of terrain.

Once thought to be extinct after decades of aggressive poaching, the gorillas were rediscovered in the 1980s. Conservationists believe there are about 100 gorillas in Nigeria and and another 300 inhabiting a 4,600 sq mile (12,000 sq km) mountainous forest expanse stretching over the border into Cameroon. 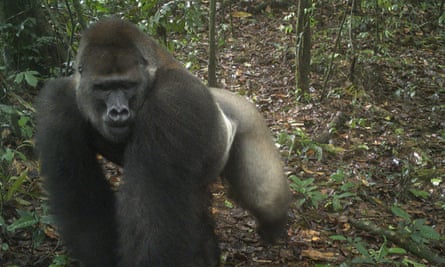 An adult male in the Mbe mountains. Photograph: AP

The images of the gorillas are the clearest sign of the species’ gradual resurgence, said Inaoyom Imong, director of WCS Nigeria’s Cross River Gorilla Landscape project.

“It is extremely exciting to see so many young Cross River gorillas – an encouraging indication that these gorillas are now well protected and reproducing successfully after previous decades of hunting,” he said.

Although the images have buoyed conservationists, Imong said better protections for the gorillas were still needed. “While hunters in the region may no longer target gorillas, the threat of hunting remains, and we need to continue to improve the effectiveness of our protection efforts.” 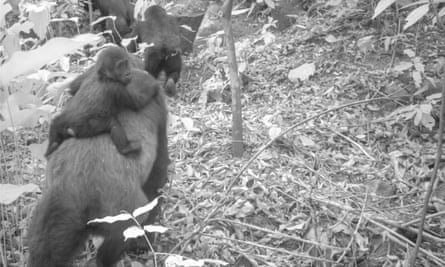 An adult female with an infant on her back. Photograph: AP

A team of 16 guards from surrounding local communities, supported by the WCS, conduct daily patrols of the sanctuary to protect gorillas and other wildlife. Conservationists monitored the gorillas’ activity by identifying their nests, dung and feeding trails. There have been only a handful of sightings in the last decade.

Otu Bernard Eban, the head of the local Abo clan, said poverty a lack of awareness had heightened the threats to several engaged species in a region rich in biodiversity. “Seeing this today rekindles my hope,” he said.

He urged authorities to “further strengthen our local laws to protect Cross River gorillas in the Mbe mountains”.

Ferdinand on Barca breeding: Bad. They still rely on old-timers
Inter wants Perisic back, even if Conte remains in the team. Bayern hopes to buy the player for less than 20 million euros
Rudi Garcia on Lyon's chances against city: the quarter-Finals showed that the favourites can also be beaten
CSKA agreed a 5-year contract with Fuchs. The transfer is estimated at 7-10 million euros
Ferdinand on Messi at Barca: Will he want to stay, given the results and the team's performance? Does he have time to wait?
I would not be surprised if Pochettino is appointed in less than 3 days. Ex-Barca winger Carrasco on the club's new coach
Alaba about Mueller: we are Glad that Bayern have such a player
Source https://www.theguardian.com/world/2020/jul/09/group-of-six-rare-cross-river-gorillas-caught-on-camera-in-nigeria