For much of her glorious acting career, Edie Falco had a secret: she didn’t know what she was doing. She accepted that, objectively, she was very good – the Golden Globe, Emmy and Screen Guild awards for her work in the Sopranos and Nurse Jackie gave that away – but struggled with her inability to explain why she was good. It all stemmed from her time at college, when she was surrounded by polished students who could articulate what made for great acting. But Falco was the only one who could produce it.

After sustained success, and a chance encounter in an airport with a Meryl Streep biography, Falco became comfortable with the fact that, as she puts it: “There’s certain people who know how to act from a more intrinsic level than an intellectual one.” Probably more than she realises.

The principle applies to almost all professional creativity. Those who can, do. But most of them couldn’t teach even if they wanted to. It’s rare to find somebody who is equally accomplished in theory and practice. The great performers usually rely on something else – an instinct which, at its best, verges on the supernatural.

Take the example of everyone’s favourite improv theatre: association football. It is analysed like never before, but most of the really good stuff, the Emmy-winning stuff, remains almost impossible to articulate. Ask anybody who has produced a moment of individual brilliance and the chances are they will struggle to explain why or sometimes even how they did it.

Dennis Bergkamp, Kevin De Bruyne, Lionel Messi, Ryan Giggs and – if you want examples from a different sport – Ben Stokes and Michael van Gerwen are among the thousands of greats who attest to the importance of instinct. There’s no I in team, but there are plenty in individual – and in instinct, improvisation, imagination and ingenuity. And every team benefits from the successful demonstration of those.

QPR were certainly grateful when Clive Allen went on impromptu zigzag through the West Ham defence in 1984. It belongs to a subgenre of solo goal, in which a player abracadabras himself from a space the size of a phonebox through a combination of skill and improvisation. (See also: Leonardo.) But it shares the same quality as 99% of all solo goals: the I-word. “To be honest,” he says, “I don’t know what possessed me to do it.”

Taking each drag-back as it comes

Allen, like all great goalscorers, spent his career trying to find space. That generally involved running on to the ball rather than trying to manufacture it while in possession. But he did a nice sideline in goals that involved the sort of imagination and spatial awareness associated with hipster darlings. Bergkamp or Dimitar Berbatov would have been very happy to score this goal at Cambridge, and they would have loved the one at Upton Park.

It started with the mundane act of stretching away from goal to control Mike Fillery’s cross, while trying to keep his balance on the muddy surface. Allen turned just outside the D and stopped to front up Billy Bonds, the West Ham captain. Bonds was leaning towards him like a sumo wrestler, waiting for the signal to engage. Their brief stand-off was interrupted when Neil Orr, appearing to Allen’s right, decided to stick his surname in. As he approached, Allen dragged his studs over the ball to move it slightly away from goal, thus partially shielding it from Orr and buying himself a split-second to work out what to do next.

Allen’s instinct told him to drag the ball again, this time to move it completely away from Orr. As he did so, Bonds saw his chance and lunged optimistically towards the ball. Before he got there, Allen produced a third drag-back to take him out of the game. Orr, meanwhile, was transfixed just outside the area, engaging in a ferocious internal debate as to what day it was.

“After the second drag-back I still had my back to goal, so I had to move it again,” says Allen. “That’s why I did another drag-back. Each touch led to the next one.”

One at a time. It’s the footballer’s cliche, usually used for taking each game as it comes. But most individual goals are created one step – or, in Allen’s case, one drag-back – at a time. There’s no bigger picture, no bird’s-eye view or medium-term planning. It’s like an arcade adventure game, where your only concern is to avoid being zapped by the nearest defender.

For all Allen’s eye-catching drag-backs, the best touch might be the one that followed, an instant push into the space in front of goal. “The ball actually got away from me a little,” he says, “and I had to stretch to finish it.”

The weight of the touch was less important than the angle. Had it been any straighter, Alvin Martin would have been able to beat Allen to the loose ball. Instead he arrived a split-second after the striker, who guided the ball past Phil Parkes and into the bottom corner.

The finish was admirably clear-headed; most of us would have been so high on our own skill as to over-excitedly leather it into Row Q. It was a goal of unique brilliance, a Zorroish swish through the West Ham defence, and even more striking in the context of 1980s English football. It belonged on the Copacabana.

One of the most memorable things about Allen’s goal was his anti-celebration. He walked away, almost po-faced, with nary a hint of a smile. At first we assumed this was faux-nonchalance, the pose we all struck when we fluked a screamer in the park as kids. But it was actually because of the match situation.

With Trevor Brooking producing the kind of masterclass that had some wondering whether he could be tempted out of international retirement at the age of 35, West Ham had battered QPR and should have led by much more than 2-0 when Allen scored. Allen’s wasn’t a consolation goal, as there were 14 minutes remaining, but at the time it probably felt like it.

“It was because of the way the game had gone,” he says. “And maybe, in the moment, I didn’t realise quite how good a goal it was. I didn’t see it as a spectacular goal that I was gonna go crazy about. Now I look at it and think, yeah, the drag-backs were quite something.”

It gave new meaning to the cliche of dragging your team back into the game. Allen did celebrate wildly when he scored a tap-in nine minutes later to give QPR an unlikely draw. He had missed much of the season, but the West Ham double came near the start of a brilliant run of 10 in 10 games. It had a huge impact both on him and his team. At the end of the season he made his England debut against Brazil in the Maracanã, and soon after moved to Spurs.

Allen’s goals also helped QPR to finish fifth in their first season after promotion to the first division. Had they won their last two games, they would have ended up in second. Fifth was still good enough for Europe, which was a shock to one journalist who had written at the start of the season: “The only way this lot will qualify for Europe is through the Eurovision Song Contest.”

Much was made of their “magic carpet” – the plastic pitch that rubbed so many opposing teams up the wrong way. Many away sides in the old Second Division moaned about having to play on it, and that didn’t change when QPR were promoted to the top flight. “The only difference,” said their manager Terry Venables, “was that, being the First Division, we got a higher class of complaint.”

They had a higher class of riposte as well. QPR won as many away games as any team that season, including the champions Liverpool. They could play on plastic and grass – or, as Allen showed at West Ham, on mud. 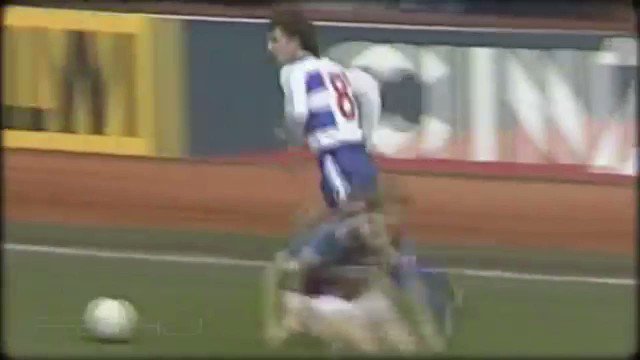 Fantastic goal by Clive Allen for QPR in 1984. pic.twitter.com/1NfOQ7Abp1

• Up Front by Clive Allen is published by deCoubertin Books.