With spotty wifi, lagging sound and Zoom chaos, the 78th Golden Globes was a half-virtual ceremony once again dominated by British stars and marred by both technical difficulties and renewed scrutiny on the awards’ lack of diversity.

A year after Phoebe Waller-Bridge’s Fleabag and Sam Mendes’ 1917 led a near British-invasion of the Globes, Netflix’s prestige royal family drama The Crown won for best television drama series along with a sweep of acting prizes for its Prince Charles (Josh O’Connor), Princess Diana (Emma Corrin) and Margaret Thatcher (Gillian Anderson).

The night kicked off with wins for two black British stars as best supporting actors in film and TV – Daniel Kaluuya in Judas and the Black Messiah, and John Boyega in Steve McQueen’s Small Axe — two victories which highlighted the night’s animating tech and diversity struggles. Kaluuya’s speech was nearly abandoned because of mic issues (“You’re doing me dirty!” he said as the Globes cut away, then cut back), while Boyega’s excitement was filtered through glitchy sound. 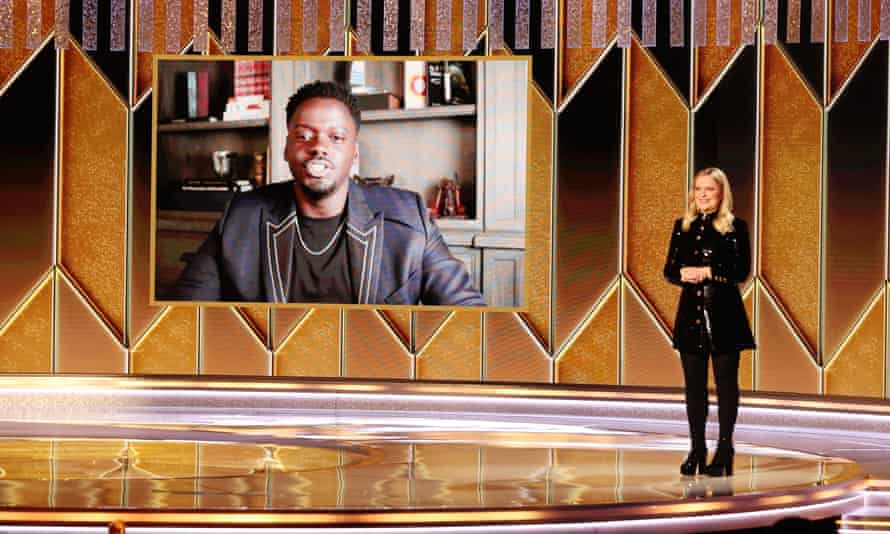 The report that the organization, whose event marks the beginning of Hollywood’s awards season and holds outsize clout in the industry, doesn’t have a single black member drew widespread criticism prior to the ceremony, particularly in light of snubs for black-led television series (I May Destroy You) and ensemble films (Spike Lee’s Da 5 Bloods, Ma Rainey’s Black Bottom, and One Night in Miami). Several industry stars including Ava DuVernay, Shonda Rhimes, Amy Schumer, Sterling K Brown and Judd Apatow tweeted condemnations under the hashtag #TimesUpGlobes with a graphic from Time’s Up, the Hollywood organization formed in the wake of #MeToo, calling for reform of the HFPA.

The tension did not go unmentioned by the night’s emcees, comedians Tina Fey and Amy Poehler, who returned for their fourth go-round following a stretch in 2013-15. Standing side-by-side on a split screen across the country (Fey in New York, Poehler in Los Angeles) the duo addressed rooms filled (according to Covid safety protocols) with essential workers and health professionals instead of the usual megawatt celebrities.

The two took their usual lighthearted jabs at award show pageantry and the false hierarchy of film versus television, before acknowledging the HFPA controversy. “Everybody is understandably upset at the HFPA and their choices,” said Poehler. “Look a lot of trashy garbage got nominated, but that happens, OK? That’s like their thing. But a number of black actors and black-led projects were overlooked.”

“We all know that award shows are stupid,” said Fey, but “even with stupid things, inclusivity is important”. On the lack of any black members, Fey spoke to the HFPA directly: “Maybe you guys didn’t get the memo because your workplace is the back booth of a French McDonald’s, but you’ve got to change that.” 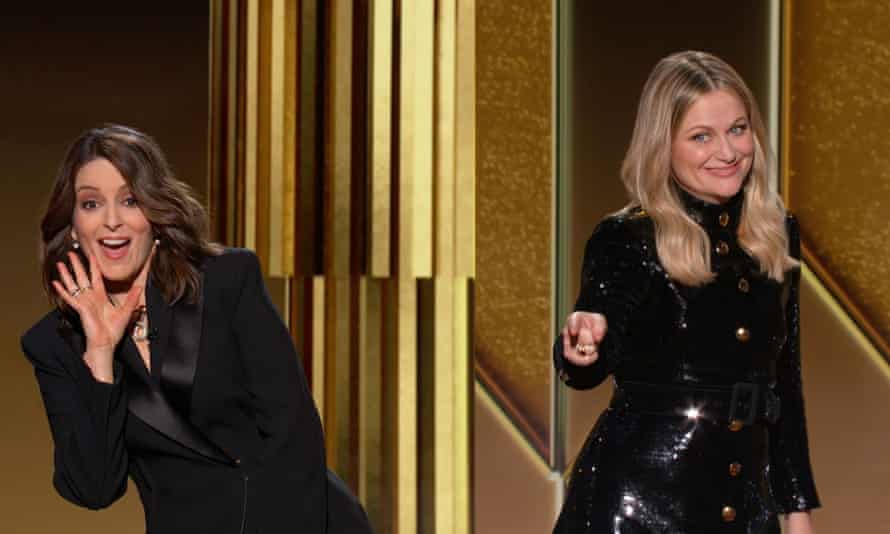 HFPA leadership also briefly addressed the criticism onstage. “We have our own work to do … we must have black journalists in our organization,” said a German member. Another echoed the association’s statement to the Times earlier this week and said the association looked forward “to a more inclusive future”.

“[There’s] a story we’ve been afraid to see and hear about ourselves in this industry,” she said. “A story about which voices we respect and elevate and which we tune out, a story about who’s offered a seat at the table and who’s kept out of the rooms where decisions are made.

Fonda called on Hollywood, “including the groups that decide who gets hired and what gets made and who wins awards,” to be leaders and “make an effort to expand that tent so everyone rises and everyone’s story has a chance to be seen and heard.”

Time’s Up’s president and CEO, Tina Tchen, responded quickly to the ceremony. “The HFPA’s statements tonight and over the last several days indicate a fundamental lack of understanding of the depth of the problems at hand,” she said in a letter. “Your stated version of change is cosmetic – find black people. That is not a solution.”

Frustration with the HFPA aside, the evening marked another triumphant year for Netflix – The Queen’s Gambit, the streamer’s most-watched miniseries to date, took home the top prize for limited series and netted star Anya Taylor-Joy her first Golden Globe. No program was as omnipresent as The Crown, which picked up three more awards, bringing its Globe total to six.

“You have taught me compassion and empathy beyond any measure,” said Corrin in her speech, thanking the real Princess Diana. O’Connor, meanwhile, urged audiences to “all collectively put mental health at the forefront of our minds”.

On the comedy side, the final season of Schitt’s Creek rode its wave of Emmys dominance to wins for best series and best actress for Catherine O’Hara.

Baron Cohen took home the top comedy film prizes for Borat Subsequent Moviefilm, his sequel to the hit 2006 comedy about an outlandish Kazakh journalist traveling the US which generated headlines for a queasy, controversial bedroom scene involving Donald Trump’s personal lawyer Rudy Giuliani. “Donald Trump is contesting the results … he’s claiming that a lot of dead people voted, which is a very rude thing to say about the HFPA,” joked Baron Cohen in his best actor speech. 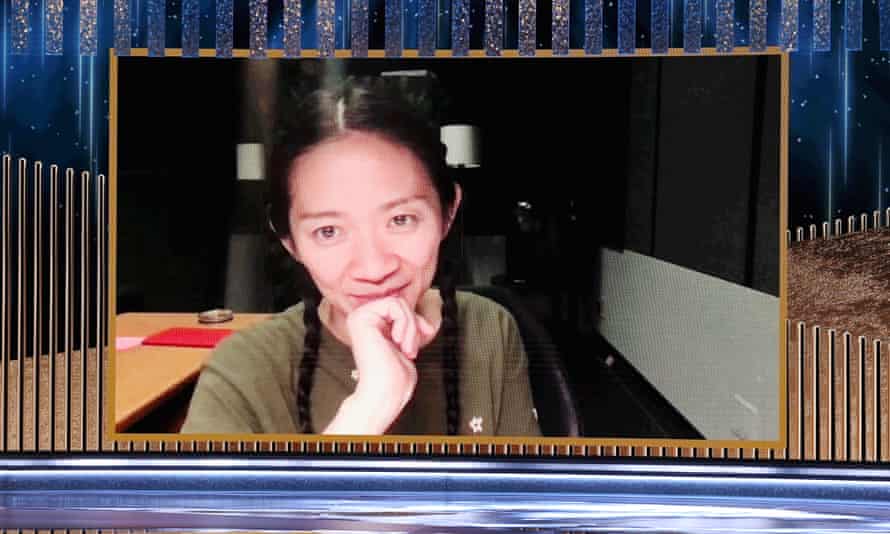 For the first time in Globes’ history, the majority of best director nominations were women – Emerald Fennell for Promising Young Woman, Regina King for One Night in Miami and winner Chloé Zhao for Nomadland.

Nomadland, a generous, observational film on elder Americans displaced by the Recession to mobile homes on the road, also triumphed as best drama film, a significant win for a director whose first two films were independent, fervently non-commercial projects.

“Nomadland at its core for me is a pilgrimage through grief and healing,” said Zhao, accepting, like all the other stars, from a living room on Zoom. “So for everyone who has gone through this difficult journey at some point in their lives, this is for you.”

Best actor in a drama went to the late Chadwick Boseman, whose death in August at age 43 from colon cancer shocked the industry, for his final on-screen role in Netflix’s Ma Rainey’s Black Bottom. In an emotional speech, his wife, Taylor Simone Ledward, said the Black Panther star would “say something beautiful, something inspiring, something that would amplify that little voice inside all of us that tells you you can, that tells you to keep going”.