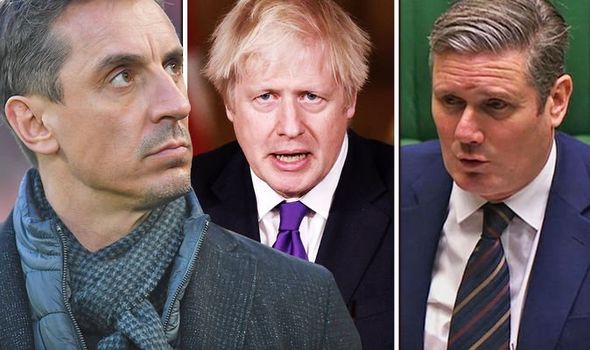 Gary Neville has lashed out at Boris Johnson and Keir Starmer (Image: GETTY)
Sign up for FREE for exclusive news, deals, offers and discounts

The former Manchester United and England footballer lashes out during an interview with Anushka Asthana on Peston, which airs on ITV at 10.45pm on Wednesday evening. Last week, Manchester was placed into Tier 3 - the highest alert level in the Government's updated yet stricter set of lockdown restriction rules. This immediately sparked a backlash from Greater Manchester Mayor Andy Burnham, who had been at odds with the Government during the previous tier system when Manchester was being moved from Tier 2 to Tier 3.

Speaking on Peston, Sky Sports football pundit Neville says: "We're frustrated from the inconsistency, the flip-flop strategies that the government have adopted over the last eight months.

"I think we're even frustrated about the fact that yesterday the Labour Party abstained.

"You know, your job's to stand as a leader in the most difficult times - it's not to abstain, it's not to not turn up."

David De Gea: I try to be a leader for Manchester United. I have the experience of winning big titles here
It feels like we've been working together for 10 years! Chelsea stars say goodbye to Lampard
Bayern Munich have signed former Basel striker Oberlen
Tuchel will sign a contract with Chelsea for 1.5 years (David Ornstein)
Barcelona still owes Liverpool about 29 million euros for the transfer of Coutinho
Immobile on last season: Lazio felt invincible before covid. They could have fought for the scudetto
Chris Sutton: Lampard is another victim of Russian roulette at Chelsea. This is Abramovich's style
Source https://www.express.co.uk/news/uk/1367600/Gary-Neville-news-labour-party-sir-keir-starmer-boris-johnson-itv-peston-manchester-covid?utm_source=feedburner&utm_medium=feed&utm_campaign=Feed%3A+daily-express-news-showbiz+%28Express+%3A%3A+News+%2F+Showbiz+Feed%29