This was exactly the kind of afternoon Tottenham had anticipated when Gareth Bale jetted back in five months ago. Two goals and an assist offered compelling evidence he has a clear use beyond Europa League cameos and heightened the impression that, at long last, he is ready to be both the gamechanger and team player José Mourinho wants.

Perhaps even more encouraging than the individual showpieces was his harmony with the rest of Spurs’ front four, all of whom were outstanding. Everyone was on the same page and that was evident through the marvellous ball Bale played to Harry Kane for the strike that effectively put this game beyond a sub-standard Burnley. Lucas Moura deservedly got in on the act too; given their woeful run of domestic form in recent weeks Spurs’ performance was an importantly timed reminder that, when it is harnessed properly, they have attacking power capable of blowing opponents away.

Bale has scored goals of significantly higher aesthetic value than his opener but, given the circumstances, the most opportunistic of close-range lunges must have felt particularly sweet. This was only his third league start since returning and the most recent, at Brighton four weeks ago, had been an individual and collective no-show. But he had looked sharper in the last fortnight, a gloriously swept finish against Wolfsberg on Thursday rolling back the years, and perhaps a showing of the quality he produced here was the logical next step.

This goal, scored after 68 seconds, owed much to the work of Son Heung-min even though there will be debate about the forward’s intentions. When he cut inside to cross from beyond the left corner of Burnley’s area there were few who predicted a low, scuffed-looking ball that evaded James Tarkowski’s lunge and surprised the cluster of players primed for a delivery to the far post. Bale had read it though and, with Nick Pope and his defence all flat-footed, stole in to trickle a simple finish over the line. 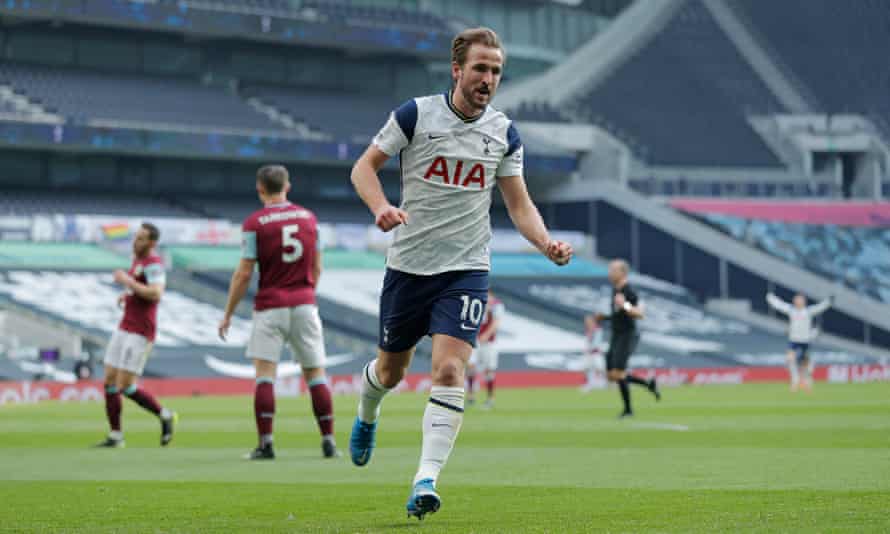 Had Son meant to find Bale that way? It would have been an exceptional feat of vision although, in fairness, that is hardly beyond him. Burnley had never conceded a Premier League goal this quickly; their plan to sit in and play on Spurs’ neuroses had been heavily compromised and any contingency to make sure they stayed in the game was swiftly blown away, too.

Spurs kept coming in waves, Kane flashing a shot wide to Pope’s audible displeasure before the keeper blocked well from Moura. In another blast from the past, Bale tore past Charlie Taylor to start an attack that finished with him centring across goal. That was moments before a flourish of far greater impact that spoke volumes for his burgeoning confidence.

Receiving possession from Pierre-Emile Højbjerg deep inside his own half, Bale looked up and found Kane with a raking 60-yard pass to the left that beat Josh Brownhill’s lunge. What happened next felt entirely familiar, Kane working the shooting angle before beating Pope at his near post via a deflection off Tarkowski.

A skied effort from a good position on his left side suggested Bale is yet to hit maximum expression. But Spurs were enjoying themselves and made it three just after the half-hour. This time it was Moura, taking a touch and blasting in after the luckless Tarkowski had inadvertently flicked on Sergio Reguilón’s cross, who applied the wound and the only question from there was how many they might score.

Ten minutes after half-time came an answer. Son found Bale in acres of space on the right with an outside-of-the-boot pass whose purpose nobody could doubt. This time Bale’s favoured foot did the job stylishly, wrapping around the ball and sending it sweetly into the net via Pope’s far upright.

Burnley had been woeful and, given they are only five points clear of the relegation zone, there was now a need to avoid the kind of thrashing that can send a season careering off course. Matej Vydra headed over from their first semblance of a decent chance as Spurs’ tempo dropped but there was never any real suggestion they would make inroads into the score.

At least they managed to keep it down from there, Pope saving well from Kane and Son. Bale’s departure with 20 minutes left, to eager applause from the Tottenham bench, was confirmation of a job thoroughly done.