GAME Of Thrones' Rose Leslie showed off her growing baby bump after announcing her pregnancy with husband Kit Harington.

Rose was dressed casually in comfortable black trousers and a navy jumper, accessorising with a trendy hat over her loose flame-coloured hair.

The star was make-up free and had their pet dog's lead wrapped around her arm as the pooch obediently stood beside her.

Her bump was fully on display underneath the cosy top, with Rose looking happy and relaxed as she helped Kit.

The Jon Snow actor was also dressed down in fitted grey jeans and a light brown top that showed off his muscular body.

The pair are thrilled to be welcoming their first child, with Rose first debuting her bump in Make magazine last month as she announced her and Kit's exciting news.

The beauty revealed at the time that she and Kit had moved back home to England from the US so that they can raise their child close to their family and friends.

Rose told the publication: "What a glorious thing to be able to run to the countryside and recoup.

"It’s a great privilege to be surrounded by greenery, birdsong and hedgerows, and our delightful neighbours. It’s so peaceful."

The mum-to-be went on to add that she calls the Tudor manor house in East Anglia "the house that Jon Snow built" - referencing Kit's famous Game of Thrones character.

Kit and Rose fell in love after playing short-lived on-screen couple Jon Snow and Ygritte on the fantasy series.

After meeting on set in 2012, the pair got engaged in September 2017 before tying the knot the following year.

Their wedding was at Rose's 12 Century family castle in Scotland, with guests including their Game of Thrones' co-stars such as Emilia Clarke, Peter Dinklage, and Sophie Turner.

While Rose only appeared in two seasons of Game of Thrones, Kit was one of the series' most central characters.

He appeared in every season - with the show's finale airing last year to a mixed reaction from fans.

It was previously revealed that Kit checked into a rehab facility a few weeks before the final was shown, stressing that the ending of Thrones had "really hit him hard".

He entered the luxury Connecticut health retreat Privé-Swiss, where he has been seeking treatment for stress and alcohol, according to Page Six. 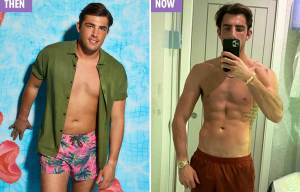 A rep for the actor said at the time: "Kit has decided to utilize this break in his schedule as an opportunity to spend some time at a wellness retreat to work on some personal issues".

No further details regarding Kit's condition were mentioned in the statement.

A one-month stay at the luxury rehab facility costs a whopping £95,000 and Rose was said to be extremely supportive of her husband's decision to get the help he needed.

Merson on Kane: there is No other player like that in the world. Messi is only a tenner. And Harry is already playing like de Bruyne
Ajax overloaded the young Williams and was sharper before Onana's mistake. Liverpool were helped by Klopp's original half-time decisions
Messi was fined 600 euros for a shirt in memory of Maradona, Barca-350 euros
Zidane will not be sacked. Real Madrid have full confidence in him (As)
Zidane's future at Real Madrid is in question. The coach is not as confident as before (Marca)
Marcel Villas-Boas has snapped a record 13-game losing streak in the Champions League. And for the first time I scored in this draw
Queiroz dismissed as coach of the national team of Colombia
Source https://www.thesun.co.uk/tvandshowbiz/13058843/game-thrones-rose-leslie-baby-bump-kit-harington/