Mr Patterson’s stock trailer works on the same principle, with an extending tailgate that automatically adjusts its pitch according to the ground level, keeping it at or below the magic 20deg.

To do this, he’s fitted legs to raise the rear of the tailgate, thus slackening the angle.

Cleverly, he’s also come up with a way of connecting these legs to the levers in charge of lifting the ramp out of the tailgate, which means a shallow angle can be maintained on any terrain.

An additional ramp section is used to extend the tailgate to the ground, and this is stowed on the front of the trailer and lifted into place manually. 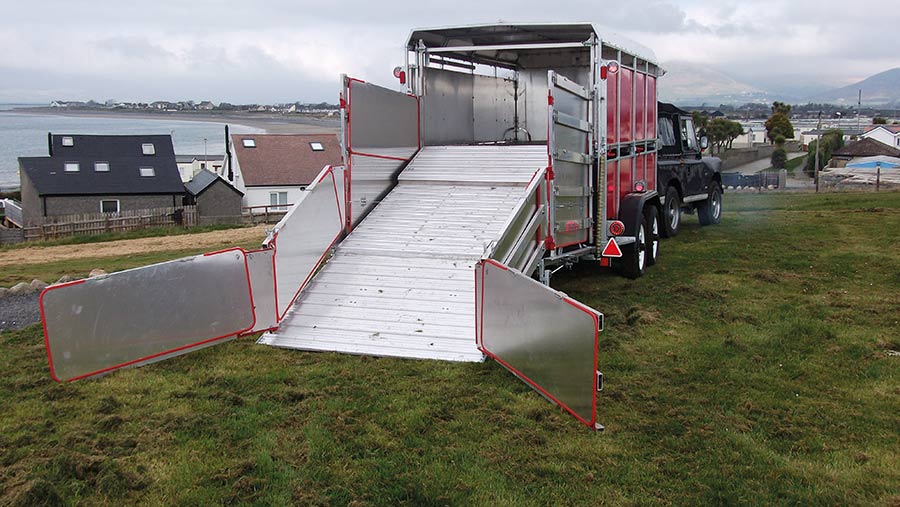 There’s also a well-thought-out top gate with a drop-down section to form the upper part of the ramp.

This slides up into the roof space of the trailer when it isn’t required, using a system similar to that of an up-and-over garage door.

Mr Patterson has also included a set of solid boards to hang on the gates that prevent pigs looking through the bars and getting distracted.

These are stowed behind a divider at the front of the trailer when they’re not in use.

Added to that, he’s come up with a neat system for the folding upper decks. These have swing-across box-section supports, which secure to the opposite side using handle nuts with grease-filled caps.

The ramps themselves are operated via a set of levers on the front of the trailer that allow them to be released and lowered into place.

Finishing touches included having the entire chassis and frame galvanised and adding automotive vinyl wrap to the aluminium side panels. He also fitted a comprehensive set of LED lights.

To achieve your goals, you need the right tools for the job. If what you need doesn’t exist, simply invent it. We share this ethos and used it to create the Ineos Grenadier. An uncompromising 4×4, built on purpose and there to support those who need it most.