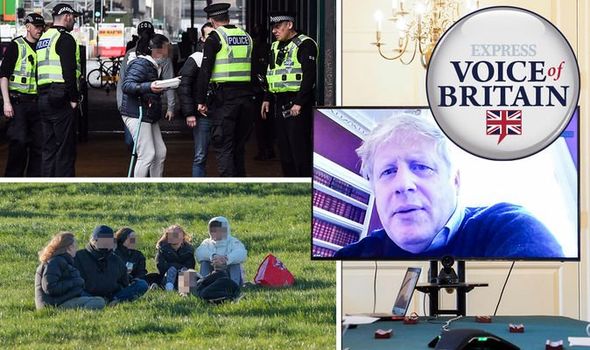 Officers in Derby said they were in “absolute shock” after finding 25 people - including children - gathered together with food, alcohol and the karaoke machine.

A group from Bristol were also ordered to go home after travelling to climb a mountain in Wales.

They were attempting to scale the peak of Pen Y Fan, which is located in the Brecon Beacons National Park, before police intervened.

Chief Constable Gareth Morgan, of Staffordshire Police, told the Daily Express some people may only realise the scale of Britain’s health emergency when someone they know is fighting for their life.

Others across the country continued to hold house parties, go on caravan holidays and take driving lessons. 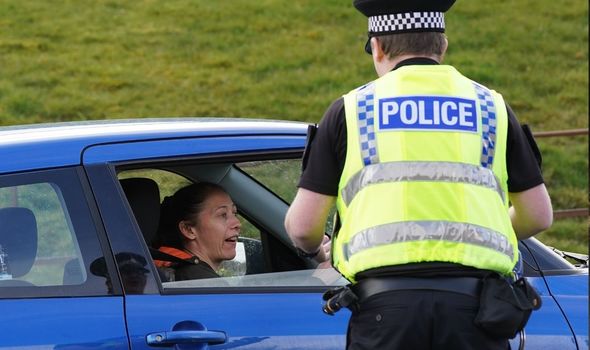 Coronavirus: Police are now working around the clock (Image: GETTY)

New powers given to police in England mean no-one will be allowed to leave their home “without a reasonable excuse”.

Anyone caught flouting these could be hit with a £60 fine.

Police can break up groups of three or more and order people to go home.

Chief Constable Morgan said: “We are really working flat out to strike the right balance.

“I appreciate there will be some cases where we get the judgment wrong - but if we don’t get this right then I would expect the isolation to go on longer and perhaps become more restrictive. That’s why we need to get people to do the right thing now. 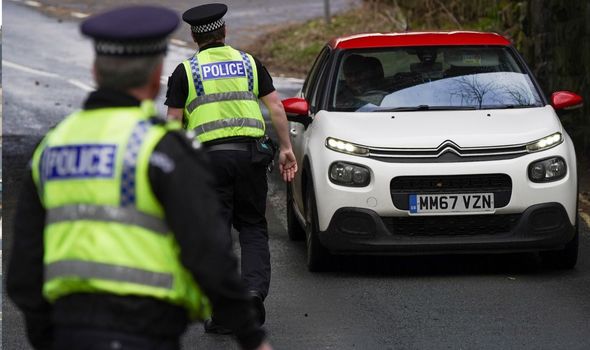 Coronavirus: Checkpoints have now been set up (Image: GETTY)

“Tragically as the numbers inevitably go up and people increasingly know someone who is seriously unwell, then those flouting to rules might finally get it.

“But that’s the point where it’s too late - we’re trying to prevent the spread.”

Officers in Cumbria, Cleveland, Essex and the West Midlands thanked their communities for staying at home.

Many chiefs feared a repeat of the previous weekend where people flocked to beauty spots and national parks.

Checkpoints were put in place near beaches and other tourist hotspots to stop people travelling there to walk their dogs or exercise. 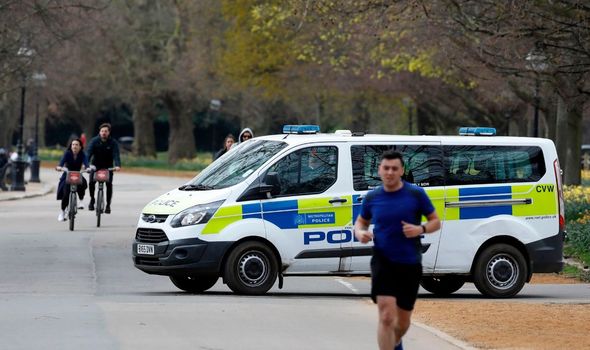 Officers and the Royal Military Police manned a vehicle checkpoint near the Catterick Garrison near the Yorkshire Dales amid fears people would flood to the beauty spot.

A motor patrols officer in Devon stopped one camper that had been driven down from Birmingham, saying in a social media post: “This gentleman is now on his way back to the Midlands.”

In North Wales, officers criticised a driver who took their child out for a driving lesson because they wanted to make the most of the quiet roads.

Mr Morgan, who is self-isolating with coronavirus symptoms, added: “We are dealing with a small number of individuals, the vast majority having now heeded the messages from mid-week. 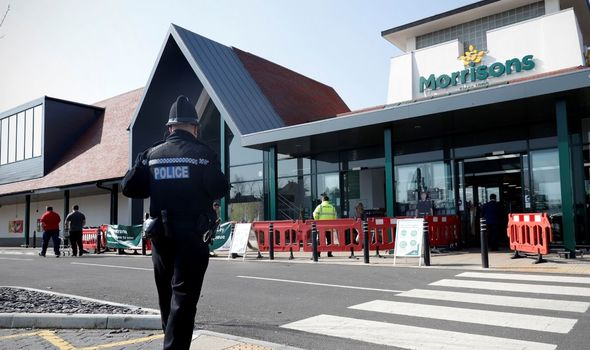 Coronavirus: Police have been given additional powers (Image: GETTY)

“There are some people who are still unsure about the guidance and they may be anxious and scared, as many are.

“They need to be encouraged but directed.

“But there is a minority who don’t seem willing to comply - and I would describe them as selfish and arrogant.

“They are putting themselves and others at risk, including my colleagues and if they were to become unwell they will be a burden on the NHS which could have been avoided.

“I absolutely understand the frustration on the limits to people’s lives but this is a national crisis and we can all play a part - we can literally all help to save lives.” 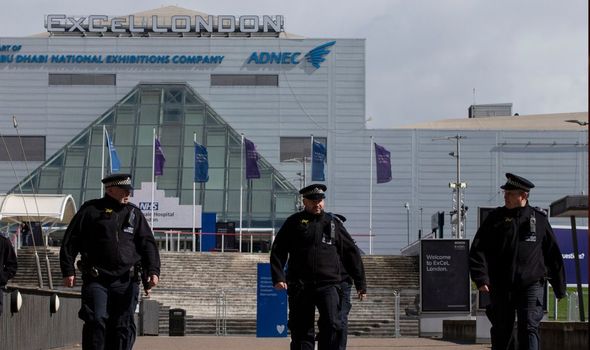 Police forces in Humberside, West Midlands, Greater Manchester, and Avon and Somerset have all set up dedicated hotlines to make it easier to report neighbours flouting the rules.

The National Police Chiefs’ Council revealed on Friday that forces had issued fines within hours of new powers coming into force.

Cleveland Police yesterday said it had issued eight fines since the new powers were introduced.

Chief Constable Richard Lewis added: “Our relationship with communities is vital and we recognise the power of the new laws.

“We police with consent and will continue to apply common sense.

“We will beat the virus together and our relationship with you needs to endure beyond this period.” 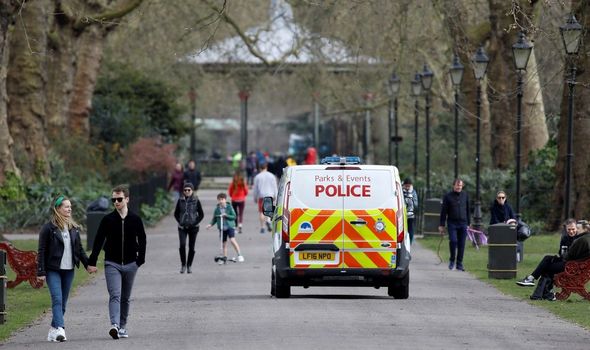 Government advice states people should not travel to national parks or areas of natural beauty for exercise.

West Midlands Police, which is bracing itself for the area to become a coronavirus hotspot, added: “These are extraordinary times.

“We must be further apart, but we’re coming closer together. From the bottom of our hearts, thank you to everyone who is putting normal life on hold, and those who continuing their work to save others.”

Essex Police added: “Thank you, Essex. “We have seen that the vast majority of you are only out for the reasons set out in the Government guidance.

“The Government has introduced enforcement powers, we will only use these when it is absolutely necessary.” 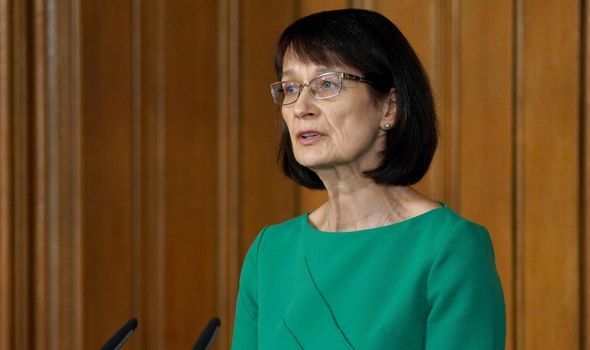 Coronavirus: Jenny Harries admitted the measures could be in place for some time (Image: GETTY)

Cumbria Police added: “A very quiet day again at Devils Bridge and Windermere. Thank you again for keeping away from the Lakes this weekend. We have seen a massive improvement on last week, so thankfully the messages are being listened to which is great news. Thank you.”

Armed officers were this weekend forced to Taser a yob who spat at officers while shouting that he had coronavirus.

The head of the CPS, Max Hill QC, has warned those who cough or spit at emergency workers during the coronavirus pandemic face up to two years in jail.

Yuran can leave Khimki, Kalinichenko and Filimonov-enter the coaching staff, Zinin-become a sports Director
Manchester United denied that Lingard had discussed a move to Milan with Smalling and young
Bayern will not sell Alaba this summer, Tiago can leave for 60-80 million euros
Sky Sports will pay the Premier League clubs all the money for broadcasts in this and next seasons. The deduction of 170 million pounds was moved to the season-21/22
Havertz does not want to move to Bayern this summer. He chooses between Real Madrid, Liverpool, Manchester City, Manchester United and Chelsea
Atalanta bought Pashalic from Chelsea for 15 million euros (Nikolo Skira)
Russia, Germany and Portugal qualify for the Champions League (Bild)
Source https://www.express.co.uk/news/uk/1262045/coronavirus-uk-latest-news-lockdown-police-fine-karaoke?utm_source=feedburner&utm_medium=feed&utm_campaign=Feed%3A+daily-express-news-showbiz+%28Express+%3A%3A+News+%2F+Showbiz+Feed%29

Who is Charlie Dimmock and is the Garden Rescue host married?

Driver caught at 105mph on M6 and the excuse everyone gives