DAYS out are go, go, go as theme parks, zoos, castles and other attractions in England open up again.

As lockdown eased yesterday, they are ready for visitors – with measures such as reduced numbers, social-distancing and one-way routes.

Check out visitengland.com/knowbeforeyougo for hints to keep you safe.

Then plan a day out with the help of 20 tip-top ideas from TRISHA HARBORD.

ZSL London and ZLS Whipsnade zoos are opening up more of their areas from Saturday.

They are limiting numbers but almost all the animals can now be viewed.

Whipsnade in Bedfordshire also has Asian elephants roaming 30 acres of paddocks. Takeaway food and drink is available and there is plenty of space for a picnic.

LIONS, tigers and naughty monkeys are all waiting for you at Longleat Safari Park in Wiltshire.

As well as driving through the park, you can now walk among the animals.

Stroll through Monkey Temple as marmosets and tamarins scamper around, and discover the newest furry residents in Koala Creek. Guests are advised to stay “one zebra apart”!

The Longleat railway, Rockin Rhino ride, maze, farmyard and gardens are open. Food is available too.

YOU might not be flying to the tropics – but can still have a tropical experience at Stratford-upon-Avon Butterfly Farm.

Thanks to a team of workers who have stayed throug lockdown, the butterflies, birds, fish, animals and plants have been cared for and the attraction can now reopen.

They have also created a Mayan display, recreating artefacts to celebrate the link with Belize, Central America, where many of the butterflies come from.

Enjoy the wildlife garden and see giant silkmoths and some of the world’s largest caterpillars.

GO deep underground and enjoy a kaleidoscope of colours.

The limestone caves of Wookey Hole in Somerset’s Mendip Hills have become even bigger with Chamber 20 — where a recently blasted tunnel leads to more caverns.

DO not go to Skegness without visiting Natureland Seal Sanctuary. The family-run business — which rescues abandoned seals from the Lincolnshire coast — is a fantastic sanctuary.

The attraction, which relies on ticket sales and donations, managed to look after the seals and other animals including penguins, meerkats, alpacas and reptiles during lockdown.

There is also a Floral Palace housing a rainforest, cacti, flowers and tropical butterflies — and an aquarium.

HIRE a boat and tootle along a canal, exploring the countryside, packing a picnic or stopping off at a canalside pub.

Waterway holiday firm Drifters offers boats equipped with kitchen and bathroom facilities from 14 locations in England. Full tuition is included for those new to boating.

From the boat yard at Gayton on the Grand Union Canal in Northamptonshire, it takes an hour to cruise to the village of Stoke Bruerne.

Once there, moor up and follow the woodland walk trail, visit the Canal Museum and the Boat Inn.

YOU might not see dinosaurs but you will learn a lot about rocks and fossils as you cruise along Dorset’s Jurassic coast.

Hop on the City Cruises boat at Poole Quay and sail past the Sandbanks peninsula and beautiful Brownsea Island, a National Trust site and the largest of Poole Harbour’s islands.

You’ll also see the Isle of Purbeck and Studland Bay while the captain gives you the history, which dates back 185 million years. Stop over at Swanage pier before returning.

HISTORY fans can enjoy a Wartime London tour, bringing the stories to life after 75 years.

On the three-hour walk, you’ll see the HQ where the Allied leaders co-ordinated the resistance, evidence of bomb damage, air raid shelters and statues dedicated to heroes.

Afterwards have afternoon tea at Rubens at The Palace, which overlooks the Royal Mews.

BAMBURGH Castle towers 150 feet above a three-mile sweep of beach in Northumberland.

It has ramparts and battlements and an imposing Norman Keep providing fabulous views across the North Sea to Holy Island and the Farne Islands.

It was at the centre of Anglo Saxon battles, famous sieges and was destroyed by the Vikings. It was also the first castle in England to fall to gunpowder artillery during the Wars of the Roses.

DISCOVER an amazing world of birds and their Jurassic ancestors in the Cotswolds. Birdland Park & Gardens, on the River Windrush, is home to more than 500 birds from magical owls to rare species such as the Waldrapp Ibis.

Spot flamingos, pelicans, cranes and waterfowl in their habitats.

Meet England’s only breeding group of king penguins and the Pandemonium of Parrots, the latest addition to the attraction in Bourton-on-the-Water.

THE former home of BBC’s Springwatch is the ideal place to get away from it all — a 700-acre nature reserve. Pensthorpe Natural Park in Fakenham, Norfolk, has woodland walks, lakes and farmland teeming with wildlife.

PEPPA Pig and her pals are trotting around again from Saturday at Paultons theme park. There are nine rides dedicated to the cartoon pig, among more than 70 attractions.

The Hampshire park will also showcase its new four-acre American Midwest town. It includes Stormchaser, the UK’s first free-spinning rollercoaster and a new ride, The Cyclonator.

PACK a picnic and play hide-and-seek among the 1,000-year-old ruins of a huge Benedictine abbey at Abbey Gardens in Bury St Edmunds, Suffolk.

Founded by King Canute in 1020, the abbey once housed a shrine to England’s former patron saint, St Edmund, but the whereabouts of his remains are still a mystery.

Afterwards, head to the aviary and wildlife feeding area. Wander along the river Lark, which borders the gardens and tuck into an ice cream from the café.

There are 26 rides in the park for all ages including the Freefall Tower, dodgems, a haunted house and the Big Apple rollercoaster among others.

THE grounds and gardens have been open for a month but Warwick Castle’s Knight’s Village accommodation is back from Saturday.

You’ll also be able to climb the towers and ramparts, enter the magnificent Great Hall and experience the UK’s biggest bird of prey show, The Falconer’s Quest.

Peacock Garden has an array of flowers, a topiary and 20 peacocks.

IRONBRIDGE is described as the “beating heart of the Industrial Revolution” and the complex, near Telford, Shropshire, is reopening some of its museums on timed admission slots, including the Blists Hill Victorian town and iron and furnace kitchen.

Watch foundrymen working and walk across the first ever cast-iron bridge, built in 1779 across the River Severn.

IT’S not often you come across a towering two-metre spitting cobra and a three-metre tarantula. Visit Marwell Zoo in Hampshire for a larger-than-life adventure!

Featuring up to 40 models of predators, such as the venomous blue-ringed octopus, the fearsome creatures have been magnified to an eye-popping size.

IF you want to tire the kids out, head to BeWILDerwood, The Curious Treehouse Adventure.

You can spend hours clambering on wooden play frames, ziplines and mazes in a beautiful forest in Horning, Norfolk.

There are also family activities including boat rides and storytelling.

IT’S worth visiting Sewerby Hall, which sits on a clifftop, just for the spectacular views over Bridlington, East Yorks.

And you can take a trip back to the 1900s to see what the house, full of furniture from the Victoria and Albert museum, would have been like then.

Stroll through the rose garden and along the woodland walk. Or visit the zoo with 60 mammals and birds. 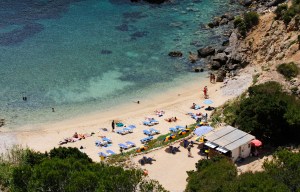 Can I travel to Spain from the UK? Latest rules following air bridge plans 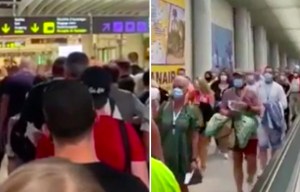 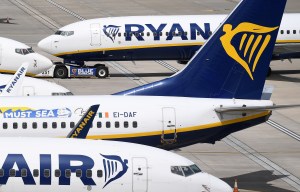 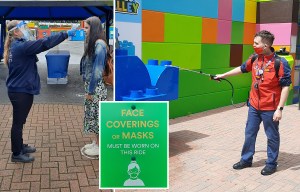 BUILDING UP TO IT 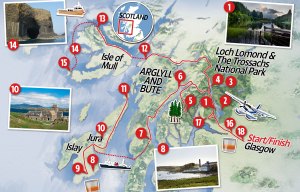 Treat yourself to the quiet, scenic alternative to Scotland's Route 66 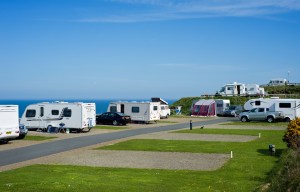 THINK Blackpool and think Pleasure Beach and illuminations. The theme park is back with reduced numbers and a plan for each ride to respect social distancing.

Aurier agreed to move to Milan. Tottenham want 20 million euros for a defender
Can-Casillas: One of the greatest is leaving the stage. You have always been an example, my friend!
Atletico President: Simeone is great. He constantly brings victories and titles
Bayern goalkeeper Fruchtl can go on loan to Nuremberg
Liverpool can buy Norwich defender Lewis for 10 million pounds as a competitor for Robertson
The Europa League returns today. We remember where everything stopped
Christian Falk: A third-party agent is working on Sancho's transition. Manchester United can claim that they are not negotiating
Source https://www.thesun.co.uk/travel/12031789/travel-attractions-reopen-england/

Old Barclays building in Swansea is to be re-developed

Kimberley Walsh could have played Maria in Corrie

Woman gets ‘carried away’ with Frenchic paint and turns her entire drab bathroom blue – even the bath, toilet and sink

Is Geoff holding Elaine hostage in Corrie? Latest fan theories on her disappearance

How to watch Manchester United vs LASK

Regulators must crack down on big tech’s anti-repair practices

The vulnerable mum worried about her children returning to school

The Eat Out to Help Out alternative for takeaway discounts

James Rodriguez set for sensational Atletico Madrid transfer from Real Madrid for £13.5m with no future under Zidane

New Guinea has greatest plant diversity of any island in the world, study reveals

A year on from a devastating siege, Kashmir is being turned into a colony | Mirza Waheed

Prince Harry resents that William is seen as the 'sensible one', expert claims

Covid 'could destroy more than half the jobs in County Durham'

'Twister' spotted over sea off the coast of Cumbria

Appeal after teenager stabbed in Tranmere

Who is Eliza Talal? The missing girl from Lansdale, PA who suffers from autism

How Blackburn with Darwen can exit local lockdown measures before Burnley, Hyndburn, Rossendale, and Pendle

We've all been using dishwashers wrong this whole time

What you can be fined for under the local lockdown law for Blackburn, Burnley, Rossendale, Hyndburn and Pendle

Can you have coronavirus without a temperature?

What time does Harvester breakfast start and finish?

Boris should splash out to save leisure centres after Covid cash crisis, Tower Hamlets mayor urges

How many people died in the Beirut explosion in Lebanon?