Rose West will take the secret of missing teen Mary Bastholm’s disappearance to her grave, the killer’s daughter fears.

Mary, who went missing in 1968, is at the centre of a renewed police hunt, with officers searching a café linked to West and her serial killer husband Fred.

Now daughter Mae, 49, has said she wants Mary’s family to have closure and believes her mum may know the answers to solve the mystery.

Fred West is feared to have snatched and murdered schoolgirl Mary, 15, more than 50 years ago.

Speaking to the Sunday Mirror, Mae said she feared Rose may be hiding details revealed by Fred about what happened to Mary, who could have been his first murder victim.

It comes after police said they would search the basement of the Clean Plate in Gloucester, where Mary worked as a waitress – and criminologists said the move could lead to more sites being searched for other victims of one of Britain’s most notorious serial killers.

Officers have been excavating the basement of the site, which is half a mile from the couple’s ‘house of horrors’ home.

Asked if her mother would reveal details in Mary’s case, Mae replied: ‘She won’t. I think Mary’s murder was before her time but how do I know what they discussed?’

Mae said she had not spoken to her mother in 12 years and the pair are now so distant that she does not expect to be told when Rose dies.

But she added: ‘I probably asked mum about Mary when we were in safe houses. Police said we were the best officers they’d known – we’d question mum about things that they had just told us.

‘She never said anything. I don’t know how she would have known, because mum would have been 15 when Mary disappeared.

‘That’s not to say that they didn’t speak about it between them.’

Fred reportedly admitted murdering Mary, who was last seen at a nearby bus stop, prior to his 1995 suicide.

But Mae, who now lives under a different name and spoke of the ‘torture’ of being born to the murderous couple, questioned whether her father would have buried Mary in the building. 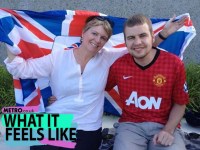 first person What it feels like... to wait five years for a diagnosis for your child

She said: ‘How can they have evidence of a body being there?

‘We’ve been trying to work out what they’ve found because they never contact us. My dad needed to know where everything was, so would he have taken that risk in the middle of a busy town?

‘I know he [committed murders] in fields, but I just felt that he wouldn’t have risked that, doing it in a business with people coming in and out all the time.

‘But it was early days, you just don’t know.’

MORE : Fred West ‘could have used second cafe on same road to kill and bury victims’