An announcement is anticipated towards the end of the week confirming the restriction drop, the Times has found. Government officials point to the transmissibility of the Beta variant in their decision making.

The Delta variant that is surging in the UK will “out-compete” the Beta variant in France, according to sources.

“Because Delta is so transmissible, it is very likely it will out-compete Beta in Europe in the coming weeks,” a source told the Times.

“Spain is unlikely to go on amber plus.”

People traveling to green list countries, such as Malta and Gibraltar, only need a PCR test and are not required to quarantine.

Adults who are fully vaccinated and under-18s follow the same rules when traveling to amber list countries. 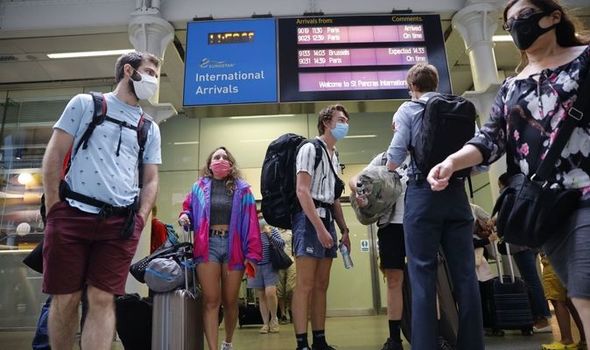 Government officials point to the transmissibility of the Beta variant in their decision making (Image: Express)
Sign up to receive our rundown of the day's top stories direct to your inbox

Tuchel about the game against Pep: We don't have tennis or chess. The last three matches were held with 50-50 chances
Barcelona wants to give Coutinho on loan with the right to buy in the winter. Liverpool refused, Arsenal and Tottenham are Interested
Real Madrid is working on a new contract with Kubo. Madrid has rejected several offers from top clubs
Ashraf Hakimi: The Muslim community in Paris is one of the reasons for joining PSG. I knew that I would feel at home
Rüdiger is ready to move to Bayern. He wants to receive more than 10 million euros a year
Ashraf Hakimi: Playing with Messi is a dream. He is simple-minded, taciturn, I was amazed by his behavior
Koeman will not be fired in the next few days. The key matches will be 3-with Levante, Benfica and Atletico

Elon Musk and singer Grimes have split after three years together

Famous TV host on the run 'after embezzling £42million from government

‘I promise you, those people will pay’: Biden slams border agents who whipped migrants

Anthony Joshua admits he has no gameplan for Oleksandr Usyk clash

Biden: Budget talks hit 'stalemate,' $3.5T may take a while

Chuck Grassley, the oldest GOP senator at 88, announces he will seek another term

Elon Musk says he and Grimes are ‘semi-separated’

Man dies after downing 1.5litres of Coca Cola in just ten minutes on a hot day

French minister: No mystery submarine deal came as 'a shock'

Manchester United vs Aston Villa: Why Premier League kick-off time has been moved

Motherwell will prove they're no easy touches, says furious boss

In the eyes of Beijing, the Quad poses a more menacing threat than Aukus

'I did well!' Angela Merkel swarmed by birds on final outing in her constituency

England players "were not involved" in decision to cancel Pakistan tour

Family's anger as Jet2 cancels flight and demands £1,000 for plane the next day

Mary Trump doubles down on uncle Donald even as he sues her: ‘I should send him flowers for selling my book’

The best rom-com films to watch with your partner on Netflix, Amazon Prime Video, NOW and more

FIFA 22: The best five Premier League players in each position on Ultimate Team

'Sabina Nessa's murder shows it's not violence against women, it's violence by men'

IKEA Glasgow to celebrate 20 years with discounts, giveaways and food tastings in store