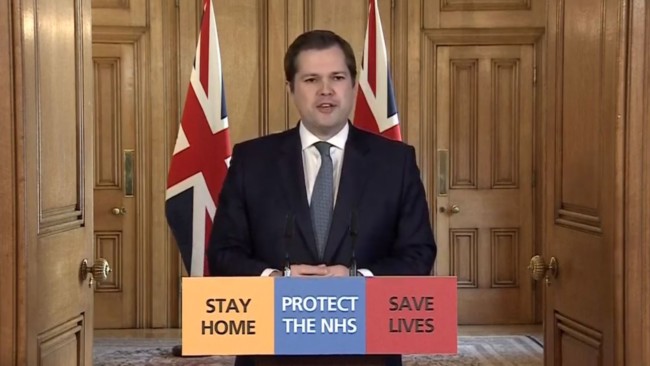 Meet Robert Jenrick. He’s one of those Tory ministers from central casting. He is (checks facts) the Communities Secretary. Jenrick’s on the front pages of the Mail, Guardian and Telegraph because he allegedly twice broke government restrictions to help to stop the spread of coronavirus. The papers says Jenrick broke the rules on only moving for essential reasons by motoring from London to a second home in Herefordshire. He then made a trip to see his mum and dad 40 miles away in Shrophire. This we know because someone apparently saw him and grassed him up to the Guardian. Jenrick says he did nothing wrong. He tweets:

For clarity – my parents asked me to deliver some essentials – including medicines. They are both self-isolating due to age and my father’s medical condition and I respected social distancing rules.

For clarity – my parents asked me to deliver some essentials – including medicines.

They are both self-isolating due to age and my father's medical condition and I respected social distancing rules.https://t.co/XlRujT8S5Y

Having helped the aged, he also helped the young. The Mail says that his country pad is his “family home”; his family travelled there “before any restrictions on travel were announced”; and: “I have been working in London on ministerial duties, putting in place the system to shield the group most vulnerable to coronavirus and organising the response at a local level. Once I was able to work from home it was right that I went home to do so and be with my wife and also help care for my three young children.”

The Guardian says Jenrick’s second home is worth £1.2m, which depending on your agenda either inspires envy (rich basta…) or understanding (why have such a lovely home if you can’t live in it?) The paper also finds room to quote former Tory minister Anna Soubry, who says Jenrick is guilty of “selfish arrogance”, which might be tautological, and Steve Reed, Labour’s new communities spokesman, who says Jenrick should think about resigning.

But hold on. The Mail says his London home is worth £2.5m. So it might be around twice as good as the country home. Or not. The Mail adds: “Mr Jenrick insisted Eye Manor in Herefordshire, built by an 18th century slave trader, is seen as the family home, rather than their house in Westminster, despite needing to be there most of the week for his work.” And: “Mr Jenrick, who has a £2,000-a-month taxpayer funded third home in his Newark constituency, said last night he considers the Herefordshire property to be the family home.” In 2014, the Mail claimed Jenrick also owned a second London property worth £2m.

Maybe Jenrick just became confused about his properties? But no. His statement is clear. He is innocent. And who are we to disprove it. We live in straightened times when there are calls for an MP to lose his job because he’s a loyal family man. Can’t at least one of them house a brothel or a secret family?

Bashkirov about life without a driver's license: he Loved Cycling. I will buy a highway and go on vacation to St. Petersburg, it is 1500 km
Angel Di Maria: I'm Glad I didn't move to Barca in 2017. I am happy at PSG
The wife of a Serbian from galaxy called for shooting rioters
Modric on how Mourinho criticised Ronaldo: Cristiano almost cried at half-time
Giorgio Chiellini: I came close to leaving Juve twice: to Real Madrid in 2010 and to Manchester City in 2011
Herrera on Neymar and Mbappe: PSG don't sell stars, they buy them
Enrique on the 2015 Champions League final: Told the team: the Worst thing that can happen is to be a Juve player in a match against Barca
Source https://www.anorak.co.uk/461273/politicians/forget-coronavirus-and-lets-all-hate-robert-jenrick.html