George Ford admits England can ill afford to lose Manu Tuilagi for any of their remaining Guinness Six Nations games as a groin problem threatens his ongoing involvement.

A comprehensive 24-17 defeat by France in Paris was compounded by the loss of Tuilagi in the 16th minute, and Eddie Jones is waiting for the results of medical checks with an update expected by Tuesday.

The Leicester centre’s departure robbed England of their most effective carrier and, given his international career was previously put on extended hold because of a serious groin injury, no risks will be taken ahead of Saturday’s trip to Murrayfield. 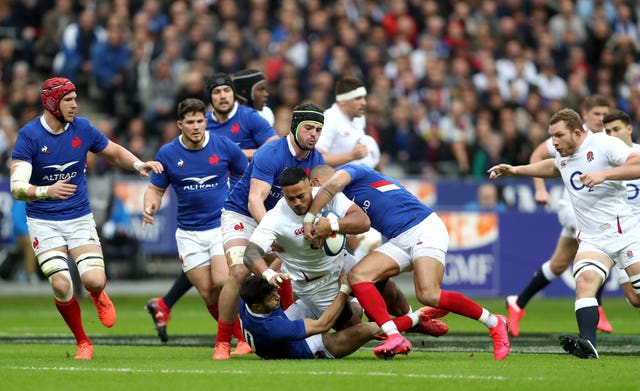 He entered the Six Nations having played just one match in six weeks because of another groin issue and Ford, his Leicester team-mate, knows he is an indispensable part of the midfield.

“It was obviously disappointing for Manu. He’s a big player for us and it goes without saying what he brings to our game,” Ford said.

“Most importantly I hope he’s all right and that his injury isn’t too bad. I’m not too sure what it is specifically, but I’m sure he will do his best to get back out there.”

Ford refuses to excuse the dire nature of the first half of an error-ridden defeat that places England on the fringe of the title race after just one round.

Their downfall against a resurgent France had echoes of last autumn’s World Cup final, when South Africa were equally dominant, and exposes Jones’ challenge to become the greatest team the sport has seen as a folly.

“The first-half was disappointing. Not good enough,” said Ford after England had gone 24-0 down before fighting back through two Jonny May tries.

“Our intent and attitude were all right but when France are playing well and you let them into the game, that’s what can happen.

“The disappointing thing is that we didn’t manage to nip it in the bud earlier, but we got ourselves together at half-time and it was a lot better in the second half.

“At half-time we talked about being more decisive, more committed in our decision-making and everyone being on the same page, especially when we were kicking the ball out of our own half.

“We felt that if we could do that then opportunities would be there and that’s how it materialised.

“I’m proud of the way the boys came back, but we need to be better than we were in the first half.

“At 24-0 down we knew we needed to stick to the plan if we were to have any chance of getting back into the game at all.

“We couldn’t go chucking the ball around willy-nilly to try to score tries – the conditions meant we had to play a certain way, which meant kicking the ball and going from set-piece to set-piece.”

England name their team to face Scotland on Thursday, with Mako Vunipola in contention to start after being rested for the opening weekend.

Body recovered from river at Bishop Auckland thought to be boy, 13

HR McMaster to publish book that may pose headaches for Trump

How Never Mind the Buzzcocks went out of tune

Rachel Roddy’s recipe for cheesy crespelle | A Kitchen in Rome

Family slammed for 'disgusting' state of table after dinner at Harvester

Huge rolls of plastic pipe washes up on beaches across Wales

No 10: UK aim is to 'restore independence' from EU by end of year

Why society ignores the pain of motherhood

Getting the train and bus from Bolton to Manchester

Children under age of 12 banned from heading footballs in training

What channel is Celtic vs Copenhagen? Live stream, TV and kick-off details

Mother’s Day Gateway: head to one of 15 European destinations from £89pp with hotel and flights included

How we met: ‘He said: “Well, we might as well get married.” It was so romantic’

Great-gran, 86, scores incredible hole-in-one from 94-feet away to win a car

Darlington grandmother to appear on TV advert for Aldi supermarket

A666 and Bolton town centre traffic and travel updates - LIVE

Man tries to abduct schoolgirl, 11, as she walked to park in Somerset village