The last bag of last year’s winter barley seed ran out perfectly on the sixth and last turn of the headland, ending an unusually busy three-day October spell of drilling.

I should have been very pleased with myself as I jotted down acreages, dates and seed rates in my drill bible.

Unfortunately, I was convinced I was going down with the virus. As the world’s biggest hypochondriac, this happens several times a day, but this time I was really convinced.

For a start, I had a stinking headache. Of course, that may have been down to staring into the low October sun, or the unusually long hours we were working that weekend.

It may even be due to the fact that I’d parked the drill under an old oak tree in Godwin’s Broom to fill up, and had been subjected to several minutes of shotblasting by ripe acorns falling from a great height.

And it wasn’t just my head that was aching. The Horsch ST4 had a funny turn in the radar department, which had led to a long session of “drillman’s yoga”, trying to reach and replace assorted “modules” until the on-board computer stopped sulking.

Kate Moss I am not, and threading my way through tines, points and bright red superstructure is not as easy at it used to be. Thanks goodness for the old CO3, still parked up in the barn, ready to be cannibalised.

Did I have a fever? I felt hot – but then again, I’m trying to avoid aircon these days because of my sensitive sinuses (bless), and it was certainly warm for mid-October.

Somewhere on the Deere’s CommandCenter is an ambient temperature reading, but I still haven’t cracked how to use it; I’ve only had it nine years.

And there were tears streaming down my face, too – although this was easier to explain. Old seed is always dusty, so I’d made sure I’d parked into the wind when doing the filling, and worn one of my precious and expensive masks.

But it’s not just dust and seed that has been falling out of these old bags – Mr and Mrs Rat have been in, and even invited Mr Squirrel round for tea. There’s all sorts of crud and gunk falling out, ideal for spout blocking. 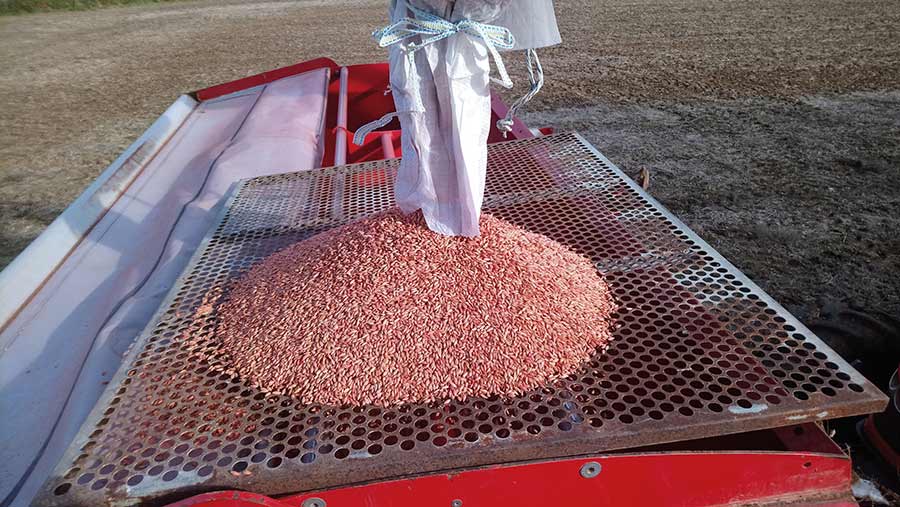 The solution is, of course, a sieve from a Claas Protector 6, which has been hanging round the barn since the 1970s.

Perfect for trickling the seed through, although it does quadruple filling time and result in more dust.

The eyes have it

And it was during one of these lengthy fill-ups that the wind mischievously did a gusty U-turn, and both eyes got an unsavory dusting.

Whatever you do under these circumstances, don’t rub itchy eyes. The result would have been swollen eyelids, blurred vision and wobbly drill lines – and you don’t want that in a field with three footpaths in it.

So, in a highly unusual display of self-control, I didn’t touch them. It didn’t stop the tears, though. Mind you, the local radio featuring 1980 as the “Golden Hour” didn’t help.

Still, it was very satisfying to finish the job, and neighbour Robert and I went to the Jolly Flowerpots (bravely and determinedly still serving customers) to celebrate – after I had had a good shower and even taken my own temperature, just to be on the safe side.

A couple of pints and too many peanuts later, I felt much better. And best of all, the next morning I knew I definitely didn’t have the virus: my sense of smell was just fine.

Jurgen Klopp: Maradona is the best player in my life. Meeting him was like meeting the Pope
Chalhanoglu will move to Manchester United as a free agent in the summer of 2021 (Christian Falk)
Benzema, Carvajal, Ramos and Valverde will not play with Alaves due to injuries
Ronaldo will not play against Benevento. Pirlo gave him a rest
Zidane on Real Madrid's downturns: Stability in football is the hardest thing to achieve. The problem is not in relation
Alaba's agent wants to start talks with Chelsea and PSG in January
Klopp on the Premier League calendar: No matter what I say, it won't help. Waste of time
Source https://www.fwi.co.uk/farm-life/flindt-on-friday/flindt-on-friday-barley-campaign-ends-in-tears-and-beers