Boris Johnson and the Conservative Party have enjoyed a run of success in the polls, sweeping up at the 2019 general election and all but obliterating Labour Party strongholds. But nothing in politics lasts forever, and a new poll has shown how much work the Prime Minister needs to do to keep his lead before Britain heads to the polls once more.

A poll, conducted by YouGov for The Times, shows Tory support has collapsed in 'Blue Wall' heartlands in the southeast and east of England.

The poll surveyed 1,141 adults in 53 Blue Wall constituencies between July 20 and 28, 2021, and the results will make for difficult reading for Mr Johnson.

The seats polled are all currently held by the Tories, all voted for Remain in 2016, and have a higher-than-average concentration of tertiary degree holders in the population. 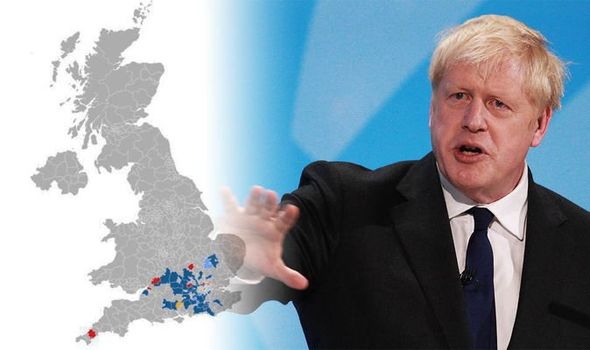 Blue Wall voter poll: Could Boris be on course to lose the Blue Wall? (Image: YouGov/GETTY)

This represents a change of -8 points for the Conservatives from their 2019 performance in these constituencies, +4 points for Labour, a surprising six-point drop for the Liberal Democrats, and a sizeable seven-point gain for the Greens.

The Conservatives are falling almost twice as fast in the Blue Wall as they are nationally, with the latest YouGov poll showing them five points down on their 2019 general election showing.

Constituencies that could abandon the Tories include Wycombe, Chipping Barnet and Chingford and Woodford Green.

A large drop in the Conservative vote share would also severely threaten four other Tory constituencies, including current Foreign Secretary Dominic Raab in Esher and Walton as well as Cambridgeshire South, Cities of London and Westminster, and Guildford. 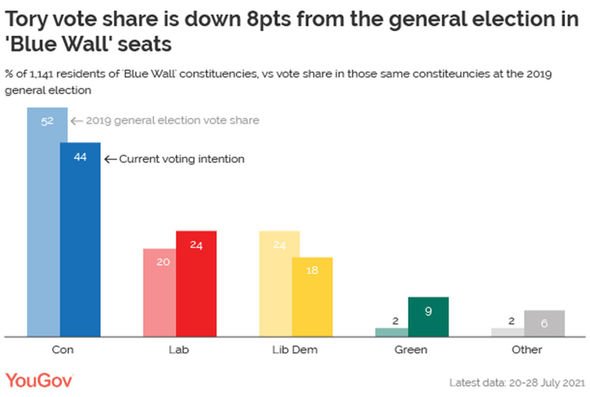 The YouGov poll results said: "While it would not be anywhere near enough to offset the ]Labour] party’s losses in the so-called Red Wall in 2019, Labour punching holes in traditional Tory foundations will send alarm bells ringing across Conservative Associations and MPs in the South."

The concerns cited by the Blue Wall voters included the Government as a whole, Brexit, Tory housing plans and HS2, among others.

Some 54 percent of Blue Wall residents disapprove of the Government’s record to date, with just 30 percent approving.

And 47 percent of the Blue Wall believe that the Government is taking the country in the wrong direction, with a majority of 54 percent believing the Government does not listen to people in their area. 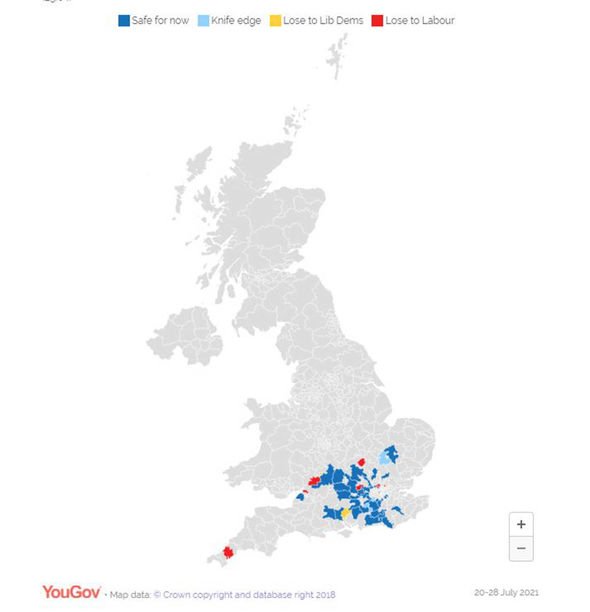 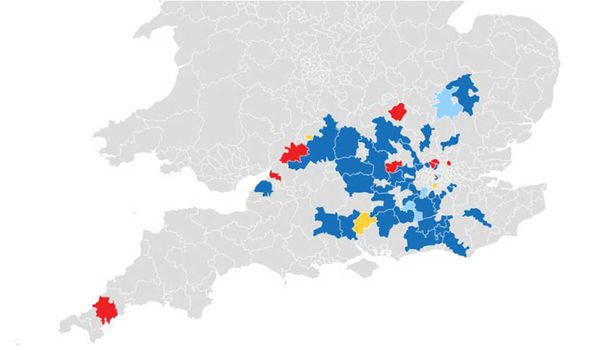 Blue Wall voter poll: The seats safe 'for now' in blue and those expected to fall (see above image for key) (Image: YouGov)

Meanwhile, 24 percent of Blue Wall voters support the development of HS2, while 46 percent oppose it, another 22 percent neither support nor oppose.

Furthermore, while they believe that more houses are needed nationally, they are less keen to see homes built in their local area - 43 percent support, 52 percent oppose houses being built in their areas.

Voters in these constituencies think the Government has handled Brexit badly and that it was the wrong decision to leave in the first place.

Patric English, a research manager for YouGov, said: "The results of the blue wall poll highlight just how difficult a job Boris Johnson has in balancing his new voter coalition.

"The exact sorts of policies and priorities on issues such as Brexit and investment which are winning him support in the north and midlands are costing him and his party in the south and east.

"This divergence and the political realignment which follows has only been growing stronger in recent years, as the OCnservative's contrasting fortunes in the Hartlepool and Chesham and Amersham by-elections earlier this year show."

Fuel crisis: Driver pulls out knife in petrol station confrontation with another motorist

9 best highlighters: Liquids, powders and creams for the ultimate glow

What channel is PSG vs Manchester City on? TV, live stream details and team news

Barack Obama: tax the rich, including me, to fund Biden spending plan

Neighbours woken up as man found injured in street

Shortages of fuel, medical equipment and labour: are they caused by Brexit or by the Covid pandemic?

Carpenter builds a p-awesome dog shower in his home

When does FIFA 22 come out? Release dates for Ultimate Edition and Standard Edition

Anita Hill on sexual harassment and survival: ‘You have to think: what is my life for?’

Why motorists could be fined up to £5,000 for running out of petrol

'You were perfect in every way' - Heartbreaking messages left at home where Gateshead boy, 2, died