There are no film posters up in Roland Gift’s house in Holloway, London, and the platinum discs are all packed away. It’s a home that gives few clues to the remarkable life story the 59-year-old is about to recount: how the “first black punk in Hull” went on to become an international pop and movie star.

“I’ve always been afraid of getting wrapped up with fame and that glamour world,” is how he puts it today. Indeed, even when Gift’s band, Fine Young Cannibals, topped the charts on both sides of the Atlantic with their 1989 second album, The Raw & the Cooked (reissued this month, along with their eponymous 1985 debut), he had an uneasy relationship with stardom.

At the peak of his fame – when he had played Lucky Gordon in the film Scandal, about the Profumo affair, and was named among the “50 most beautiful people” in the world – he suddenly decamped to his home town of Hull, hanging out in a working men’s club and operating as an unlikely driver to the stripper. “I liked being somewhere being pretty didn’t matter. I never wanted to be in love with my reflection,” he shrugs. In 1990, after the prime minister, Margaret Thatcher, was beamed into the Brit awards ceremony, the Cannibals returned their gongs, saying they “didn’t want to be part of a Conservative party broadcast”. Despite The Raw & the Cooked’s success, the band never made another album. 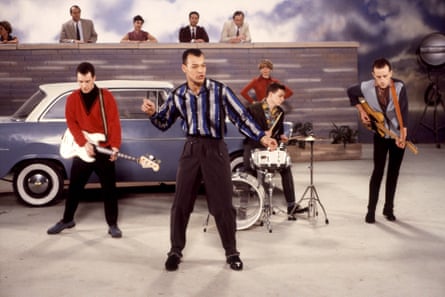 But then Gift never expected to be famous. Growing up as a mixed-race kid in the 1970s, there were scant black faces in adverts or on television. “There were black actors in films like Scum or Scrubbers,” he remembers, “but that’s the joke … they played characters in prison.” The son of a black carpenter and white mother who ran secondhand clothes shops, he spent his early years in Sparkhill, Birmingham, one of the UK’s first multicultural areas. “There were no signs in our street reading ‘No Irish, no dogs, no blacks’. Because everyone was black or brown or Irish. To me that was normal.”

Moving to Hull aged 11 was “a shock – there were only two other non-white kids in school”, but Gift never felt unwelcome. He fell into the Yorkshire city’s punk scene, where his black leather jacket, dark skin and blond hair earned him the nickname Guinness. At a Clash gig in Leeds he even caught the eye of the singer, Joe Strummer. “During the gig his trousers split,” Gift chuckles, describing how Strummer asked if anyone had a safety pin and a shower of the punk fashion items hit the stage.

At the peak of his fame, he decamped to Hull, becoming the driver for a stripper in a working men's club

“I never normally wore them but for some reason I had a nappy pin in my jacket. I yelled: ‘Joe! Joe!’ And he reached down and took it. It felt like the Sistine chapel ceiling where God reaches down.” Like you’d been anointed? “I don’t know about that,” he laughs, “but it was quite a moment.”

By which time he’d received his calling. He was in punky ska band, the Akrylykz, when Andy Cox and David Steele – formerly of the Beat, one of the UK’s first multiracial bands – recruited him for Fine Young Cannibals, a band that blended rock and soul with Gift’s inimitable, quivering vocals on hits such as Good Thing, an American No 1, and I’m Not the Man I Used to Be. Their success came despite them being told by industry figures that a white band with a dark-skinned singer would never make it.

She Drives Me Crazy, another US chart-topper, was played on both the country’s college radio and urban (black) stations, a rarity back then. “There was so much nonsense about race and music,” he sighs. “Like ‘blacks have better rhythm’. But Stax had white musicians and lots of Jamaican reggae was produced by Leslie Kong, who was Chinese.”

In the late-80s and 90s, the British film world became more diverse, too. Gift’s first role was as the handsome young revolutionary Danny in Sammy and Rosie Get Laid, Stephen Frears and Hanif Kureishi’s 1987 follow-up to My Beautiful Laundrette. The singer certainly wasn’t a shoo-in for the part. “Someone told me later that they asked the women in the office to walk past and give me the once-over,” he explains, emitting a tiny chuckle. “I got the job.”

Subsequently, projects have ranged from the 1997 TV series Painted Lady with Helen Mirren to the 2017 movie Brakes, with Noel Fielding. The occasional rejected “stereotypical” role aside, he doesn’t think he experienced racial barriers. “Not on screen … It might be a barrier if you want to create the content.” But he can relate to Steve McQueen’s recent comment to the Guardian: “If you want to understand race and class in Britain, you should start by going on a film set.”

“I noticed that with record companies. It suddenly dawned on me: ‘All these people are public schoolboys. They’re the puppet masters.’ Invariably they were a certain colour.

“We can get hung up on identity,” he considers. “I’m half-white, half-black. So what? We all do the same things.” He recounts an incident in childhood, when he and some Irish mates, the Magees, strayed into a posher area and encountered two children, dressed up with shiny shoes. “We looked at each other through the gate, and they were mixed-race too, but I knew I had more in common with the Magees, who were white, than with those kids. Their father ushered them away from us. So it’s not race. It’s class. It’s always class.” 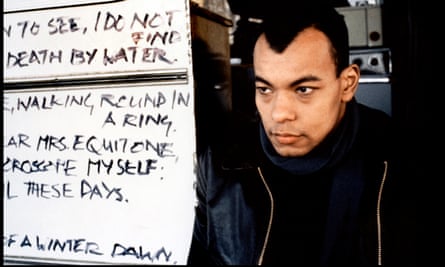 Revolutionary ... Gift in Sammy and Rosie Get Laid, 1987. Photograph: TCD/ProdDB/Alamy

Division of another kind did for the Cannibals, who fell apart in 1996. “Everyone got inflated after the success. There were squabbles about me being in films and people were telling each of us stuff about the other members. Divide and rule, basically.” When a new film was casting around for music, Gift went along. “And so did Dave and Andy, but we hadn’t mentioned it to each other. We’d always vowed not to be one of those ‘arrive separately’ bands, but suddenly we were.” He’s slightly regretful. “I wish we’d done more together.”

In 2013, an invitation to tour with Jools Holland rekindled his interest in singing live, and at some shows he experienced an almost transcendental feeling. “Not an out of body experience, but more: ‘Shit, I better not lose touch with the ground.’ It sounds kind of weird, doesn’t it?”

He also sings old and new songs in his latest project, Return to Vegas, a stage musical he is reworking from a BBC Radio 4 play that premiered in April. He plays Johnny Holloway, a musician in a band he has called The Blacks, who has a series of worldwide hits before things go wrong: Holloway picks up “bad habits”, sells the rights to the songs that were supposed to be his pension and ends up broke, friendless and fresh from five years in prison. “It’s what could have been my story, had things been different,” he says.

Before this creative spurt, Gift says he had deliberately slowed his career down because he wanted to be a present father for his sons. His own dad spent three years in prison, “so I didn’t want to be here, there and everywhere, but I didn’t know how to manage that other than the way I did. With hindsight, I could have done things differently.”

But now Gift’s two sons have grown up and his wife, Louise, died of cancer last year. He’s keen to plunge back into work. He has been asked to write more for radio, and his eyes sparkle as he says: “Writing the play feels life-changing, in a way.” What Gift really doesn’t want is to be described like his alter ego in Return to Vegas, when someone shouts: “You’re not the man you used to be.”

“There’s a recurring daydream where he’s signing on and someone comes up and says: ‘Oh, you’re that guy from … Go on, sing it!’” He winces. “That would be a nightmarish situation for me, but it’s Johnny’s story, not mine. I still feel I’ve got a lot to offer.”

A Bundesliga club cannot be bought. But Volkswagen was able to
Midfielder Bayer Amiri was called a fucking Afghan. After the match, the Union player apologized
Ozil and Arsenal have agreed to terminate their contract. He will complete the move to Fenerbahce at the weekend
Klopp on Bruno: Outstanding player, leader. Good transfer for Manchester United, unfortunately
Paul Ince: Manchester United can beat Liverpool. Two years ago, I would not have said that
Brunu on the Manchester United penalty talk: I don't care. Our attacking players are fast, it is normal that sometimes they earn a penalty
Matip returned to Liverpool's general group ahead of the game against Manchester United. A decision on his participation has not yet been made
Source https://www.theguardian.com/music/2020/dec/03/fine-young-cannibal-roland-gift-i-went-back-to-where-being-pretty-didnt-matter